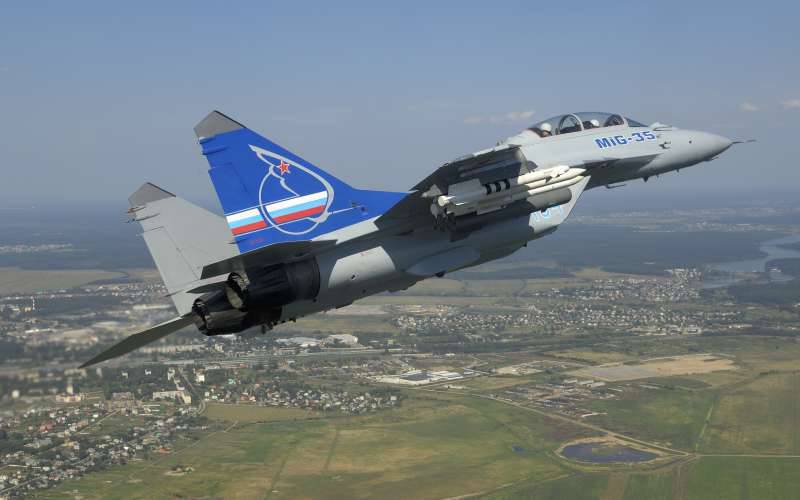 This aircraft is equipped with the latest target detection systems, it sends data directly to the pilot’s helmet, is able to intercept and even attack in cyberspace. MiG-35, the new Russian aircraft, will soon begin to perform test flights, and we should pay attention to it.

The Ministry of Defense and the Russian Armed Forces have received a prototype of a new combat aircraft, and test flights will begin in the near future. We Israelis are used to hearing mainly Western armory new products, but recently the Russian arms market has risen to several levels and showed the world some very interesting samples. One of the crown jewels is the MiG-35. Initially, he was supposed to fight for a tender announced by the Indian Air Force, but in the end it was decided to take him into service in Russia, and soon we will see him very close to our borders - as part of the Egyptian military aviation.

Sergei Korotkov, General Director of RAC MiG OJSC, said that in the near future the aircraft will be transferred to the Ministry of Defense for preliminary tests. He did not explain exactly how many aircraft are currently released. “We have completed the first stage of this work - a draft technical project. He is protected and accepted by the Ministry of Defense, ”said Korotkov. Earlier, the general director said that the aircraft will go into service with the Russian Air Force and the Egyptian Air Force in 2018-2020.

This is a new advanced aircraft of the so-called 4,5 generation. It is comparable with modern models F-15, F-16 and F-18. Without a doubt, the aircraft became the pride of Russian industry. It is equipped with two engines, is available in two versions - one and two pilots. In terms of dry data, its flight range is 2 000 kilometers, it develops speed 2 400 kilometers per hour, the maximum height is more than 17 kilometers, climb speed - 300 meters per second.

Able to attack in cyberspace

Under the wings of the aircraft there are 18 suspensions. You can attach removable fuel tanks, a variety of missiles "air-to-air", "air-to-ground" and "smart" bombs. The Russians say that the maneuverability of the aircraft is very impressive and surpasses its Western counterparts. According to them, the MiG-35 is able to cope with stealth-built aircraft. Fans of aircraft and weapons in general will appreciate the smooth outlines of this beautiful bird, different from the rough lines of old models.

The main highlight of the new aircraft was a unique optical radar station OLS, capable of recognizing different targets in the air and on the ground, including using the definition of the thermal trace of targets. The data immediately enter the pilot's helmet. The radius of the system, according to data provided by the Russian side, is very impressive - it is able to notice the target at a distance of 45 kilometers, and to identify it from a distance of more than ten kilometers. There is no data on the recognition of ground targets, since it depends on the terrain and on the size of the target. At the same time, the Russian side claims that in this case the distance is very significant. In addition, the Russians claim that it is impossible to detect with MiG-35 passive means, which gives it a great advantage.

In addition, the aircraft is equipped with a system that helps to neutralize the threat of air defense, as well as protect the MiG from cybernetic attacks. Moreover, the Russians say that the aircraft is able to carry out cyber attacks and incapacitate enemy systems. Most of the data on the aircraft is classified, but we Israelis should pay attention to the Russian weapons news, because sooner or later they will get into our region.