Ants are not an apostle


Those who were called yesterday as stranglers of freedom, executioners and royal satrap are remembered today with a kind word. One of these is Mikhail Nikolaevich Muravyov, known to the older generation from school textbooks. stories as a hangman. 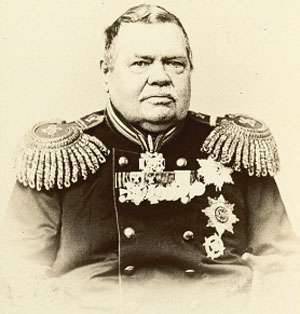 His youth was typical of his time. Born in the capital. Since childhood, fond of military and exact sciences, showing a fair ability. He participated in the Patriotic War. In the battle of Borodino received a heavy wound in the leg, after which all his life was limping. For that fight, he was awarded the Order of St. Vladimir 4 degree with a bow. He returned to the army, took part in the foreign campaign. Having retired due to health reasons, he settled in Smolensk Province. During a two-year crop shortage, he opened a charity canteen at his own expense and organized an appeal by local nobles to the Minister of the Interior, Count Kochubei, asking for help from the peasants.

In his youth, along with his older brothers Alexander and Nikolai - the future military governor of the Caucasus, he was fond of liberal ideas, was close to the Decembrists. In January, 1826 was arrested, was under investigation, but was soon acquitted and returned to the army by personal order of the sovereign.

He submitted to the emperor a note “on the improvement of local administrative and judicial institutions and the elimination of bribery in them”, with which Nicholas I led a decisive struggle, after which he was transferred to the Ministry of Internal Affairs. And soon he was appointed governor of Vitebsk, then the Mogilev province, where, becoming a convinced conservative by that time, he actively fought against Catholicism and gentry influence. The rebellion in Poland that flared up in 1830 strengthened Muravyov in his view of the main threats. At the same time, he holds the position of quartermaster-general and chief of police in charge of the commander-in-chief of the Reserve Army, and takes part in the defeat of the bulldozer in the Vitebsk, Minsk and Vilna provinces.

Of those that hang

At the height of the mutiny, Muravyov is appointed by the Grodno civil governor and is soon made a major general. By that time, he had earned the reputation of an uncompromising sedition fighter, a strict administrator. Referring to the Siberia of the participants in the uprising, despite the pedigrees, closes the free-thinking schools and churches, does not disdain to impose death sentences. On the other hand, it shows concern about the state in the fairly polonized region of Russian culture, language, spirit, cares about the needs of the Orthodox Church, supporting the initiatives of the local metropolitan.

And in St. Petersburg, Muravyev has more and more enemies from among liberals and polonofilov. They intrigue against the loyal servant of the emperor, and he eventually transfers the general to Kursk. The successes achieved here in the fight against arrears and bureaucracy draw the attention of the sovereign, and Muravyov is called to the capital, where he alternately occupies the positions of director of the Tax and Fees Department, Senator, Governor of the Land Survey Building. Receives the civil rank of Privy Councilor, and then - the rank of lieutenant general. From 1 (13) January 1850, Muravyov is a member of the Council of State.

Soon after Alexander II assumed the throne, he received another military rank and was appointed Minister of State Property. I remember his contemporaries with integrity and integrity. Being in a respectable age and high ranks, he disguised himself as a simple man in the street to go through the market, public places, extracting information about the unscrupulousness of bureaucrats and other outrages, which made fear of the scammers: And when the glamorous foes tried to cheat him, being interested in the spicy details of the Decembrist period of life, he answered without embarrassment: “I am not one of those Muravyevs whom they hang. I am one of those who hang themselves. ”

However, Alexander II did not like Muravyev. The general, in spite of the tsar-liberator, was in favor of a gradual change in the serf system, for which in liberal circles close to the monarch, he received the stigma “Conservative”. The tension in the relationship reached its climax by the year 1861. The result is retirement.

But in it the Ants did not stay long. In 1863, another rebellion broke out in Poland, ambiguously perceived not only in Europe, but also in Russia. For example, the London sideman Herzen on the pages of the Kolokol published by him called upon the Russian officers “to go on trial to the convict companies, to be shot, raised on bayonets, but not to raise weapons against the Poles. " The rebellion was promoted by the very liberal policy of the governor in the kingdom of Poland, Grand Duke Konstantin Nikolayevich and the Vilna governor-general Vladimir Nazimov. Both were slow with the introduction of the state of emergency. Frightened by the scale of the rebellion, which spread to the western regions of Russia, the emperor recalled loyal subjects who could act decisively. At an audience about his appointment to the post of Vilna, Grodno and Minsk Governor-General, Commander of the Vilna Military District with the authority of the commander of the separate corps Muravyov said: "I am happy to sacrifice myself for the benefit and benefit of Russia."

Despite his 66, he cheerfully got down to business, starting with personnel changes. Muravyev’s approach was that the harder he takes on the suppression, the sooner and with a smaller number of victims will solve the problem. According to his order, the estates of Polish landowners, who were noticed in the active support of the rebels, were selected in favor of the state. As a result of these actions, it was possible to deprive the rebels of monetary support.

Muravyov also used intimidation - public executions, which, however, were subjected only to implacable and guilty of murder. A total of 128 people were hanged, from 8200 to 12 500 were sent to exile, prison companies or to hard labor. Approximately from 77 of thousands of insurgents, only 16 percent were subjected to criminal punishments of various kinds. However, the rebels executed several hundred civilians, 1174 Russian soldiers and officers were killed or were missing.

Successes Muravyev, despite the flow of criticism from the liberal Petersburg salons, made a big impression in Russia. Showered with blessings, among which is the count title with the right to be called Muravyov-Vilensky, he submits his resignation in full awareness of the duty performed.

As it turned out not for long. In April, 1866 th at Alexander committed an attempt. The shooter - student Karakozov detained. The investigation was entrusted to Count Muravyov-Vilensky. Gravely ill 70-year-old man with honor performs the last royal assignment: a terrorist was sentenced to be hanged. Several officials indirectly guilty of the terrorist act lost their posts. Before the execution of the sentence, Muravyov did not live a few days, having passed away on August 31 (September 12) of the year 1866. He was buried at Lazarevsky cemetery. Alexander II escorted his subject to the grave.

Herzen responded about the death of the graph in his style: “The vampire who fell away from the chest of Russia suffocated”. Fedor Tyutchev responded with an epitaph:

On his grave cover
We instead of all wreaths
put the words simple:
He didn’t have many enemies
When not yours, Russia.