In what direction is the new Moldovan government "dancing"? Results of the visit of the Deputy Foreign Minister of the Russian Federation to Chisinau

March 31 2016
16
The other day a working trip to Chisinau and Tiraspol was made by the State Secretary - Deputy Foreign Minister of Russia Grigory Karasin. The trip was officially connected with the need to make “organizational conclusions” of contacts between the Russian Federation and Moldova, the Russian Federation and the Transdniestrian Moldavian Republic under the conditions of the actually ongoing economic blockade of the Transnistrian Moldovan Republic and Ukraine. The problems of the economic development of Transnistria in the situation that exists today, so it happened, by definition, is impossible without a dialogue between Moscow and Chisinau. And how should this dialogue be in the near future - a dialogue with a whip or a dialogue with a carrot (it seems that there is no third today)? - and decided to find out the representative of the Russian Foreign Ministry.


Why did the trip take place right now? The answer to this question is connected with certain changes in Moldova. We are talking about a change in the composition of the cabinet, which occurred against the background of large-scale protests organized by the Moldovan socialists, and which looked more like a secret ritual of initiation into some kind of quasi-religious structure. 20 On January 2016, under cover of night (and this is by no means a figure of speech), the new government of the Republic of Moldova led by Prime Minister Pavel Philip was sworn in.

So, after waiting a couple of months and making sure that the Moldovan government staff more or less settled down, and the new Cabinet has not yet run away to Romania with an “honestly earned billion” Eurocredits (and everything happened in Moldova too) The Russian Federation decided to talk with Moldovan government officials. You can say that there was a sort of contact testing of the Moldovan Cabinet on the uproarness and, excuse me, maydanuty, because these things are so contagious that other (previous) Moldovan ministers were often amazed by such bacilli across the Ukrainian-Moldavian border.

The quibble and maydanity test was very simple (but is Chisinau so simple?) - the Moldovan cabinet needed to answer the question: are you going to continue to extrude the Transnistrian population and lick the shoes dictating the conditions of the West? Or it’s time to move to an adequate frame of reference, where politics is sent not only and not so much by how loudly they whistled or whistled from Berlin or Washington, but by how much it reflects the real interests of the Moldovan (and Transnistrian too) people.

From the statement of Gregory Karasin (quote - president.gospmr.ru):
We are still convinced that direct dialogue between Chisinau and Tiraspol is necessary. This is the basic condition for moving forward in the Transnistrian settlement on the principles enshrined in international agreements, on the principles of mutual respect, recognizing that this is a two-sided process, in which any unilateral actions not agreed with the other party are excluded.

In general, everything is very clear from the Russian side: “You, dear and dear new representatives of the Moldovan Cabinet, are you ready to talk or will you ride again? .. 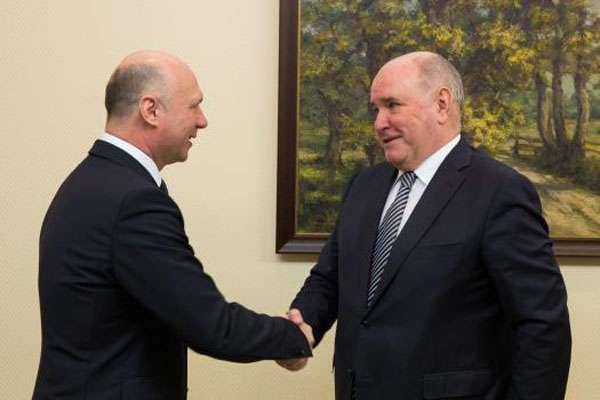 Grigory Karasin on the right, on the left - Pavel Filip

The representatives of the Cabinet of Ministers of the Republic of Moldova, as mentioned above, Pavel Filip, as well as the head of Moldovan diplomacy, Andrei Galbur, were called to answer this question.

During the meeting, it turned out that the new Cabinet seemed to be happy to completely abandon the "race" and conduct a pragmatic dialogue, but there is one thing ... But not one, but more than twenty "... but" in the EU and one big "... BUT" over the ocean.

We understand, we understand ... Not all at once. But I would like from Moldova to hear at least some hints that steps forward (even if it is a short step) will be. And the official Chisinau (very quietly, so as not to hear, you know where ...) nevertheless stated that it was time, they say, to pull the situation with bilateral relations (and about the MRT too) out of the swamp bog. So, Moldovan ministers supported the idea of ​​resuming the work of the intergovernmental commission on economic cooperation. We also agreed that the Minister of Foreign Affairs of Moldova will visit Moscow on 4 on April, where, as noted, negotiations will be held on the need for a full restoration of cultural, humanitarian and trade and economic interactions between the two countries. In addition, they discussed the possible release of the Pridnestrovskaia Moldavskaia Respublika and the resumption of the negotiation process, even in the 5 + 2 format, in which Ukraine is one of the guarantors. Ukraine itself would at least guarantee something, but this is a separate question. Therefore, the very fact that Chisinau is ready to resume negotiations and look for solutions not by ridiculous demarches, but by pragmatics and possible consideration of interests is already a positive thing. 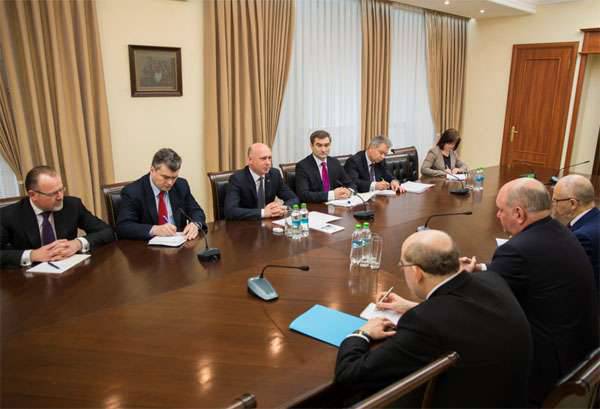 And this is an optimistic statement by the vice-premier of the Moldovan government on the reintegration of Gheorghe (Gheorghe) Balan (quote TASS):
There was a long pause in the dialogue between Moldova and Russia, now it needs to be resumed, to hold regular meetings of the intergovernmental commission on trade and economic cooperation, to address issues of population migration. Recently, Deputy Prime Minister, Minister of Economy Octavian Kalmyk visited Moscow, and a trip to the Russian capital is being prepared by the Minister of Foreign Affairs and European Integration (it’s immediately clear from the title that he was invented so that Europe would not forget Moldova’s main commitment author’s comment) Andrei Galbur, where he is scheduled to meet with Russian Foreign Minister Sergei Lavrov. All of these are steps towards restoring an interrupted dialogue between our countries. Everybody is interested in its resumption after such a prolonged pause, including Transnistria.

That seems to be a positive traced, and the beginning of contacts is. But still, the feeling that this Moldovan government will not go further than statements does not leave. He simply will not be given further statements about the “resumption of full-fledged contacts” to go. After all, how many Moldovan cabinets already started as if for health, and how they ended it is well known from the newest stories The Moldovan state, which already does not even try to demonstrate at least some independence.

A certain grain of doubt about the real focus of the new Moldovan government on cooperation is also related to the fact that the new Moldovan government is not so new. The fact is that representatives of the Liberal Party of Moldova remain in it, who live day by day with a mantra about “probable Russian aggression” and how this “aggression” should be counteracted, letting Western partners penetrate deeper and deeper ... For an increase in the depth of penetration, for example, Minister of Defense of Moldova Anatol (Anatoly) Salaru, who remained in the Cabinet of Ministers since July 2015 and who hands and feet for the abolition of non-aligned status and the country's accession to NATO, speaks. Salaru was criticized for this proposal by his new colleagues in the Cabinet, but Salaru knows who to lean on ... - The Moldovan Minister of Defense literally a few days before the visit to Chisinau Grigory Karasin took part in the event of opening a “museum of Soviet occupation” in the Moldovan capital, moreover he took part (on the question of deep penetrations) together with the American ambassador. As if he had licked a shoe, and showed that he was still an unsinkable official in the government.

By the way, about the interests of the Moldovan people. A recent public opinion poll (the poll was ordered by the newspaper Timpul) in the Republic of Moldova showed that 53% of respondents expressed the hope that Moldova would begin to interact more actively with Russia. For the first time in recent years, this percentage is higher than the number of those who are exclusively for European integration. 48% of the population advocate for the country's entry into the Customs (Eurasian Union), 41% of the population - for Moldova's accession to the EU.

In the West, they tensed ... But they remembered that there is Salaru, who always arrives with his skeleton in the closet in the form of "preparing Russian aggression."

Ctrl Enter
Noticed oshЫbku Highlight text and press. Ctrl + Enter
We are
Armed Forces of Transnistria: 23 of the year since its foundationRussian peacekeepers again want to "demobilize" from Transnistria
Military Reviewin Yandex News
Military Reviewin Google News
16 comments
Information
Dear reader, to leave comments on the publication, you must sign in.