The world is arming itself, but that does not make it safer

March 31 2016
13
On Tuesday, at a meeting of the commission for military-technical cooperation in Nizhny Novgorod, Russian President Vladimir Putin called the country's income from the export of arms and military equipment. Last year, in this market segment, the business gained more than 14 billion dollars. The order book in 2015 was replenished with 26 billion dollars and exceeded 56 billion dollars. This volume was achieved for the first time in the post-Soviet time. 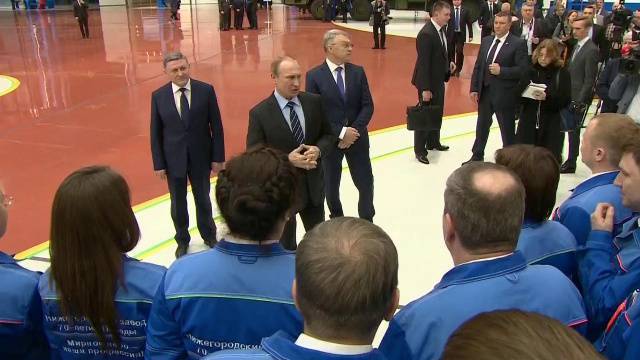 The effect of the Syrian campaign

These figures are also impressive because over the past quarter century, Russia has largely lost the arms market in Central and Eastern Europe. Previously, the countries belonging to the Soviet system were now included in the North Atlantic Alliance, and they began to buy under the requirement to bring their weapons to the NATO standard. weapon and equipment from alliance partners, mainly in the United States.

Nevertheless, Russia in the new century began to recover its position. In the zero years, due to the attractive conditions for the supply of its weapons (competitive price, after-sales and warranty service, placement of production in the customer countries, etc.), the export volume of defense-industrial complex enterprises grew at a rate of 10-15 per cent per year and reached at 2006 year 6,7 billion. As we see, from the President’s public statement, over the next ten years, the income from arms exports has even doubled.

According to the Stockholm International Peace Research Institute (SIPRI), which published a report in February on trends in global arms exports, Russia is now supplying weapons to 50 countries of the world. India remains the largest buyer of Russian weapons and equipment. It accounts for 39 percent of our exports. Next come Vietnam and China - by 11 percent. Among European partners, Azerbaijan stands out. Its share in the export of Russian weapons approached five percent.

During the sanction years (2014-2015), the sales of our weapons fell slightly and were lower than in the 2011-2013 years. However, today Russia accounts for 25 percent of world arms exports. A large market share (33%) is occupied only by the United States, which remains the main exporter of armaments. The third to fifth places among the largest exporters went to China, France and Germany.

The operation of the aerospace forces of the Russian Federation in Syria has further raised the world's interest in Russian weapons. Potential buyers have once again been convinced of the combat capabilities of military equipment and weapons manufactured by defense enterprises of Russia. As Kommersant Money magazine notes, citing its sources in the Federal Service for Military-Technical Cooperation (FSMTC), Algeria, Indonesia, Vietnam, Pakistan, Iraq, Iran and Saudi Arabia have shown interest in Russian military technology.

Algeria, for example, sent a bid for the purchase of X-NUMX Su-2015 bombers (export version of the Su-12) in December 32. Experts estimate the cost of the contract at 34 million dollars. Subsequently, the option is not excluded even for 600-6 bombers. In addition, Algeria has already concluded an agreement on the purchase of Mi-12HE combat helicopters 40 and is negotiating on other types of equipment.

A large batch of helicopters (46 units) Ka-52 "Alligator" buys Egypt. He has already signed a contract with Rosoboronexport. Shipments will start in 2017. Indonesia, Vietnam and Pakistan are interested in Su-35 fighters. In addition to aircraft engineering, deliveries of armored vehicles, air defense systems, and missile-artillery systems are discussed with customers. FSMTC specialists estimated potential contracts in the amount of 6-7 billion dollars. This is an order of magnitude higher than the costs of Russia for the Syrian campaign. Vladimir Putin called the cost of it - 33 billion rubles.

Strategy based on strength

The success of exporters is due to the growing demand for weapons and military equipment in the world. The international arms market has been growing steadily for nearly a decade and a half. Weapons are bought mainly by solvent countries. However, it is not very similar to the whims of the nouveau riche who were concerned with the acquisition of an arsenal to satisfy their inflated ambitions. The beginning of the current growth in the arms market coincides with the US invasion of Iraq.

A geopolitical tension has arisen in the world, which has been maintained since then by color revolutions, the destruction of ruling regimes and entire countries. The number of armed conflicts and territorial disputes has increased. There is a war in Afghanistan, Syria, Iraq, Yemen, Libya.

It is in these regions of the state are equipped with new weapons. For example, if in 2006-2010, Saudi Arabia acquired weapons within 2,1% percent of world export volumes, by now, 7% of weapons offered on the international market are taken into their arsenals. The United Arab Emirates also increased defense spending and increased its share in world procurement from 3,9% to 4,6%. Turkey increased from 2,5% to 3,4%.

These examples can be multiplied, because the costs have increased large and small countries. And not only in the Middle East. Here, for example, Vietnam, which was affected by disputes with China over the belonging of the Spratly archipelago and the Paracel Islands in the South China Sea. During the five-year period, Hanoi increased arms purchases from 0,4% to 2,9% in world exports.

The last illustration shows how a country's armament provides it with a stronger position in the competitive struggle in the global market. Indeed, according to expert estimates, significant reserves of oil and mineral raw materials are concentrated on the shelf of the disputed islands. At first glance, this is a fairly straightforward action. However, they are copied from the practice of modern interstate relations. Here in the center of the composition is the most "exceptional country of our time" - the United States of America.

Last year, the United States adopted a new version of its "Strategy for National Security." The document, aimed "at the most effective promotion of American interests abroad at the regional and global level", considers powerful and combat-ready armed forces as the main guarantee for maintaining US influence in the world.

True, the authors of the “strategy” stipulate that “the use of force is not the only effective way to counter challenges or a means of ensuring US involvement in world affairs,” but nevertheless called it “the main one”. As for diplomacy, it must rely on "economic power and the Armed Forces, which have no equal throughout the world."

Such is the "strategy". Looking at her, the world is arming. Even the closest allies of the Americans, who are no longer confident in the reliability and loyalty of their leader, do so. The arms business is only thriving on this. The arsenals of countries are replenished, but they are unlikely to make them safer. The example of Iraq and Syria, which at one time had modern and equipped armies, is an extra confirmation.

In the meantime, there is a demand for weapons in the world, you can do business on it, and also reputation. As it happened in the Syrian campaign, when the world saw Russian weapons in action and assessed it not only as a desired product, but also capable of actually ensuring victory. And this is its main price.

Ctrl Enter
Noticed oshЫbku Highlight text and press. Ctrl + Enter
We are
Projection of forceRussia firmly occupies a place in the global arms market 2 and will maintain its position in the foreseeable future.
Military Reviewin Yandex News
Military Reviewin Google News
13 comments
Information
Dear reader, to leave comments on the publication, you must sign in.