March 30 2016
23
With the new force, battles broke out in the Syrian province of Aleppo. Syrian sources report that Kurdish militias, together with a representative of other groups that have signed an agreement on jointly countering terrorism, are attacking the positions of Dzhebhat al-Nusra militants in the area of ​​Azaz (Azaz), about 7-8 km from borders with Turkey. It should be noted that the territory in the area of ​​Azaz and other border settlements repeatedly passed from hand to hand. 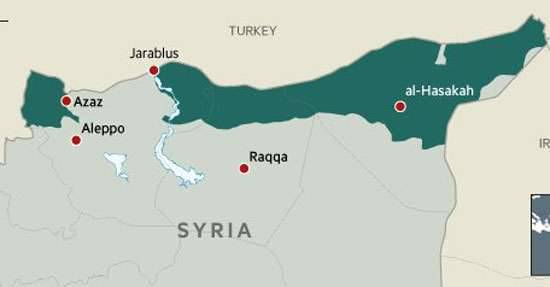 A few days ago, the militants "Dzhebhat en Nusra", as is known, who enjoy Turkish support, tried to attack the positions of the Kurdish armed formations in the said area. In addition to "Dzhebhat al-Nusra" in the north-west of Syria, terrorists from the Ahrar al-Sham group continue to operate, declaring their unwillingness to support the ceasefire and move on to the negotiation process.

Kurdish self-defense units are fighting Ahrar al-Sham and Dzhebhat an-Nusra against terrorists in areas of Aleppo province that the Kurds had earlier declared to be the Kurdish federal district of Syria.

The fighters of the "Al-Nusra Front" entrenched in one of the Azaz districts and are trying to restrain the onslaught of Kurdish militias. The fighting, as reported by Syrian military sources, is currently taking place with varying success. The final success of the Kurdish troops depends on how strong the support of the Dzhebhat al-Nusra militants from Turkey will be in this situation. After all, in fact, it was the artillery strikes from Turkey to the north of Syria that allowed the "al-Nusra" again to take possession of certain territories adjacent to the border from the Syrian side.

If the Kurds succeed in defeating the terrorist groups in the Azaz area, this will allow them to take control of the most important section of the Syrian-Turkish border and block the traffic of Turkish aid to the militants.