According to the laws of physics

March 31 2016
106
The United States adheres to a policy of weakening Russia and creating pro-American regimes in neighboring states. Such a US policy is the main strategic threat to Russia, says the report International Threats - 2016 of the Valdai Club and the Foreign Policy Agency. In addition, a "weak" Russia will fear a "Chinese expansion." As a result, Moscow will still have to become the "partner" of America, which seeks to contain China. 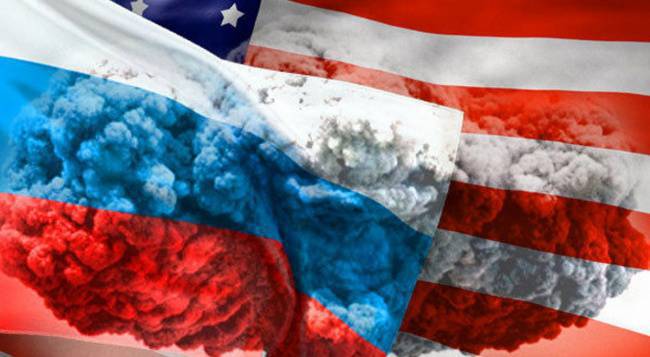 Discussion club "Valdai" and the agency "Foreign Policy" presented a report on the main threats to Russia in 2016, the newspaper writes "News".

The US policy of weakening Russia and surrounding its cordon with pro-American regimes represents a major strategic threat to our homeland.

This is reported in the report presented by the Valdai International Discussion Club and the Foreign Policy Agency.

Also in a report prepared by a group of Russian experts, including former illegal intelligence officer Andrei Bezrukov, it is reported: “Weak, sandwiched in the depths of the continent, Russia will not be a serious economic competitor and will not be able to form an alternative center of power in Eurasia. A weak Russia will be afraid of Chinese expansion and will be forced to become America’s partner in its main project of the 21st century - in containing China. ”

The program director of the Valdai Club, Andrei Sushentsov, one of the authors of the report, told the Izvestia newspaper that, at present, there are actually two approaches to evaluating US policy toward the Russian Federation. Supporters of the former believe that Washington is seeking to weaken Moscow; supporters of the second are convinced that the Americans pursue their goals, but indirectly damage Russian interests. “Russian interests are still harmed as a result of American actions, since they do not discuss them with us, they do not consider this necessary,” the expert complained.

On the other hand, political scientists admit that, thanks to the success of the operation in Syria, Russia began to find a new modus operandi in relations with the West. "Russia will consolidate as the leading force in the Middle East, capable of effectively conducting expeditionary military campaigns," quotes the publication of experts.

The document also considers the terrorist threat from Islamic radicals. According to analysts, such will not disappear even in the event of a complete victory over the jihadists in Syria. The accompanying probable scenario in the 2016 year is also pointed out - the collapse of one of the states of Central Asia and the appearance in its place of the next jihadist quasi-state. Tajikistan is especially vulnerable.

The list of other, not so noticeable threats is the potential escalation of the conflict in Nagorno-Karabakh.

On the other side of Russia, the source of problems may be the growth of tension in the Far East and Southeast Asia: there is a more pronounced confrontation between China and the US and its allies, the newspaper notes.

The list of immediate threats, noted “Izvestia”, did not hit Ukraine. The situation in Ukraine goes into the category of frozen conflicts, and therefore analysts predict the conservation of the status quo.

"The scenario of a new full-scale war in Donbass cannot be called the most likely," the report quotes. RBC. According to the authors, from the resumption of active hostilities Kiev will keep the position of its Western European partners in the "Norman Four".

The authors believe that the conflict will not be resolved in the first half of 2016. Opposition in the Verkhovna Rada, experts say, will not allow President Poroshenko to carry out a law on elections in the Donbas and constitutional reform.

Western sanctions against Russia in 2016 will not be lifted due to the unresolved conflict in the Donbas. Russia cannot yet effectively counteract sanctions.

We can agree with the theses of this report, says Dmitry Orlov, director general of the Agency for Political and Economic Communications. Moreover, in his opinion, the likelihood of a military conflict with Turkey "has practically come to naught, which was facilitated by a very timely decision on the withdrawal of Russian troops from Syria." “Ukraine also does not pose any threat to Russia, which is the co-sponsor of the Minsk agreements,” the expert said Reedus.

As for the "threat" of the United States, it is objective. The fact is that the place of Russia is no different from the place of any other country, not excluding the US allies in NATO - Turkey, Germany, Poland. “For Americans, all countries of the world are essentially one person. They perceive this or that country exclusively pragmatically: how much does it contribute or, on the contrary, impede the achievement of the USA of this or that task. Today they are hampered by Turkey - they will ignore Turkey. Tomorrow France will be hindered by their interests in Europe - they will press the French, and so on, ”the political scientist states.

After all, a stone falls on a person’s head, not because he “wants” to kill him. It falls according to the law of nature, and the one whom he struck turned out to be in the wrong place at the wrong time. Russia, too, is hindered by the United States "according to the laws of physics": Russia is "too much" in the world, and the Americans cannot simply ignore it. “US activity in the world, therefore, undoubtedly threatens the interests of Russia. The United States realizes its interests in a complex, hegemonic manner. The United States will harm Russia anytime, anywhere. But Russia's opposition is only a side effect of American geopolitical logic. If, according to this logic, it is necessary to enter into conflict with Russia, they will go to it quite calmly, because they have foreseen these costs in advance, ”Orlov believes.

So, in stating the fact of the American "threat" for Russia there is nothing unusual. And even nothing “personal”, since the USA considers any geopolitical interference (not necessarily of Russian origin) as a reason for opposition. According to some scientists, Turkey and France can also be a hindrance. And the current opposition of Russia is also a “side effect of American geopolitical logic.” The stone falls on the head "according to the laws of physics."

In essence, this is not just geopolitical logic. This state of mind, which, in spite of the emerging multipolar world, continues to claim the role of hegemon - the role of that “exceptional” power, without whose approval no major decision on the planet can do.

Observed and commented on Oleg Chuvakin
- especially for topwar.ru
Ctrl Enter
Noticed oshЫbku Highlight text and press. Ctrl + Enter
We are
Results of the week. "Do you know who they are?" Oh brother! They are crooks! ”Strangulation: the context, conduct and consequences of the American naval blockade of China
Military Reviewin Yandex News
Military Reviewin Google News
106 comments
Information
Dear reader, to leave comments on the publication, you must sign in.