March 31 2016
30
It turned out that the US is not eager to fight for Europe, especially for its eastern countries. It also turned out that the United States might think about withdrawing from NATO: let the mentioned Europe fight for itself. Analysts also admit that the reasons for the activities of NATO, determined after the Second World War, simply do not exist today. In short, let Mother Europe stand up for itself. 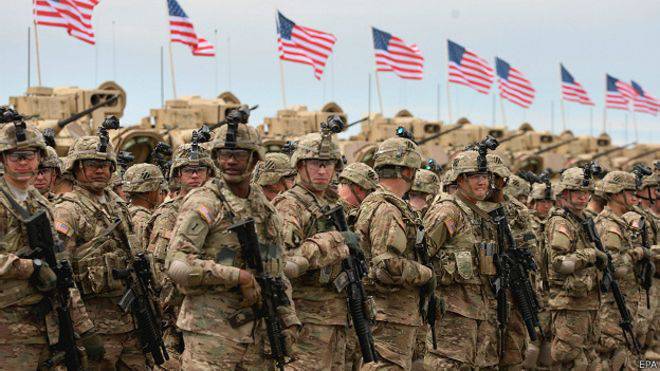 Achtung! What is written in the announcement of the article should not be taken for the official position of the United States. This is the opinion of experts. Nevertheless, it was announced in a large and influential specialized edition - The National Interest. We also note that it is in some ways combined with the election theses of Comrade Trump, who does not consider that the United States should stick its nose in all conflicts on the planet and have domestic rather than foreign policy as a priority. The United States should live like this: build bridges and roads, drive illegal immigrants to the neck and give people a normal education, and not go with democracy to Ukraine. But who will listen to Trump? That expert Carpenter is unlikely to listen.

In Ted Galen Carpenter’s article “Is it Time for America to Quit NATO?” Published in "The National Interest", it considers the likelihood of the US leaving NATO, as well as the complete disbandment of this military bloc.

In April, NATO will celebrate the sixty-seventh anniversary of its existence, the analyst recalls. Instead of celebrating this date with yet another stupid cliché "about the all-time importance of the alliance for the security of the United States and the whole world," on 67's birthday, one could make a "long overdue assessment" of NATO’s commitment to America’s interests in the 21st century. After all, there is no evidence that this is actually the case, the author sneers. Yes, and before it was not.

The creation of NATO in 1949 was a “most obvious break with traditional American policies that had so far avoided alliances with foreign powers” ​​and, in general, “followed a non-interventionist course”.

True, the “psychologically destructive attack” on Pearl Harbor struck a fatal blow to such foreign policy, the author believes.

Even well-known opponents of interventionism, such as Senator Arthur Vandenberg, acknowledged that the world has changed, and the policy of “isolationism” (“a deliberately misinterpretation of the term”) no longer meets the needs of the United States. NATO membership eventually led to an alliance with the European powers, thereby confirming Washington’s policy change.

Proponents of NATO insisted that the world has changed since World War II, and therefore the planet needs a "new paradigm" built on US global leadership.

However, a problem has arisen: decades have passed since then, and other leading minds still suggest that this change (World War II and its consequences) is “the only major event”, and everything else fits into the framework of the “new paradigm”. But this assumption is "absolutely wrong," the author writes.

Change is a “continuous process,” he said. Today, Europe is different from Europe 1949 of the year. However, the NATO institutions and most of the relevant US policies have not changed at all - they “have remained the same”.

The whole world situation "in terms of security" is also different.

The formerly divided European democracies are now united in the European Union. Its population and total GDP is greater than that of the United States! These united countries, despite their concerns about “turbulence” in the Middle East and the “roar of the Russian bear”, can “resolve both of these problems”. In addition, Vladimir Putin’s Russia is only a “pale shadow of a threat to the Soviet Union.” And the European Union in terms of population is three times ahead of Russia, and its economy is almost ten times higher than the Russian one.

The main reason why the EU countries did not do more for their own security is simple: the United States "insisted" on assuming the leading role and incurred "most of the expenses" on defense. As a result, the US spends almost 4 percent of its GDP on military needs; for NATO states from Europe, this figure barely reaches 1,6%. America bears an "incomparable economic burden"!

The European security environment has changed in a different direction. During the first decades of the alliance’s existence, Washington’s goal was to preserve the security of major players (West Germany, Italy, France, Great Britain). After the collapse of the Soviet Union in 1991, US leaders insisted on expanding the alliance to the countries of Central and even Eastern Europe. As a result, “marginal allies” got into the block (this was approximately the way people on Facebook add random friends).

Yes, only NATO is not Facebook! The military alliance is a serious enterprise, reminds the expert. Judge for yourself: NATO, with its article 5, regards an attack on one member of the alliance as an attack on all. Such a commitment can easily draw the US into an armed conflict that "has practically nothing to do with America’s own security."

“The absurdity of NATO in the 21st century may have reached its peak in February 2016, when, with enthusiastic support for Washington, the alliance recognized tiny Montenegro as a member,” the author writes further.

During the first decade after World War II, supporters of the new approach claimed that the alliance would strengthen America’s security. But how can Montenegro, this micro-country, strengthen America’s tremendous military power and economic power? This is probably a “great secret.”

Come on, Montenegro at least does not have "great-power enemies." The same cannot be said about the three other small members - Estonia, Latvia and Lithuania. Their relationship with Russia is cold - it’s freezing cold. In addition, an analysis of a “think tank” clearly showed that the Baltic countries are so vulnerable that Russian troops could capture them in a few days.

Thinking about the maximum security of America and its well-being (which is the “highest priority,” the author notes), one cannot take “static thinking” as the basis for actions.

Sixty-seven years is too long a time for any unchanging policy. American policies related to NATO are increasingly failing. You can't even call her sensible. It would be good, therefore, to conduct a thorough analysis and consider the “most radical option: US withdrawal from the alliance,” suggests Carpenter.

For reference: Ted Galen Carpenter is a senior fellow at the Cato Institute and a contributing editor at National Interest. This man is the author of ten books on international affairs, including several volumes on NATO activities.

Of course, Mr. Carpenter’s ironic analysis is not exhaustive. Some interest, and rather big, the existence of NATO for the US has. Suffice it to recall the major interventions of the end of the 20th and the beginning of the 21st centuries, which were carried out specifically with the participation of the bloc states and often while maintaining the leading role of the USA.

On the other hand, the North Atlantic Alliance could not necessarily serve as the basis for such invasion and “democratization” operations. If needed, the United States could act on a pair with France, Britain or other allies. These states would not abandon their alliance with the United States if NATO were disbanded. Instead of NATO operations, joint allied operations would be conducted. But to say that, for example, the Baltic warriors played a decisive role in Afghanistan, is not necessary.

There is, however, another international nuance that justifies the existence of NATO and turns it into a convenient American tool for manipulating public consciousness. NATO is a kind of collective counterbalance to the UN, which has turned into a puppet partly due to American influence on the planet and the wide activity of the “defense” bloc. And if the UN may veto against potential opponents of the West - primarily Russia, the North Atlantic Alliance was created to resist Russia.