March 30 2016
20
The Lazar armored personnel carriers are a family of modern Serbian wheeled combat vehicles in service with the Serbian army and exported. An armored personnel carrier with a wheel formula 8х8 was created based on the chassis of a military off-road vehicle. This combat vehicle is designed to transport personnel in the amount of up to 10 people and various military goods.


The armored personnel carrier was created by the Serbian company Yugoimport SDPR. The new wheeled combat vehicle project was submitted to the Serbian Ministry of Defense for approval in 2008 year. The car received the designation Lazar. This name was not accidental given to an armored personnel carrier: the armored personnel carrier was named after Prince Lazar Khrebeljanovic, who ruled Serbia in the XIV century and in the battle of Kosovo in the summer of 1389, headed the strongest units of the Serbian heavy cavalry. Representatives of the industry and the military decided to jointly decide on the development of the new BTR, deciding that their own development and production of such a machine would positively affect the defense industry and improve the state’s defense capability.

When shaping the future of the armored personnel carrier, engineers from Yuguimport decided that their vehicle would become the base for several samples of combat and auxiliary equipment, and also receive a set of protective equipment that is characteristic of military equipment of the MRAP format (wheeled vehicle with enhanced mine protection) . As the scope of the new combat vehicle were considered patrols, including in urban areas, as well as escort columns. These tasks had a great influence on the formation of the appearance of an armored personnel carrier. 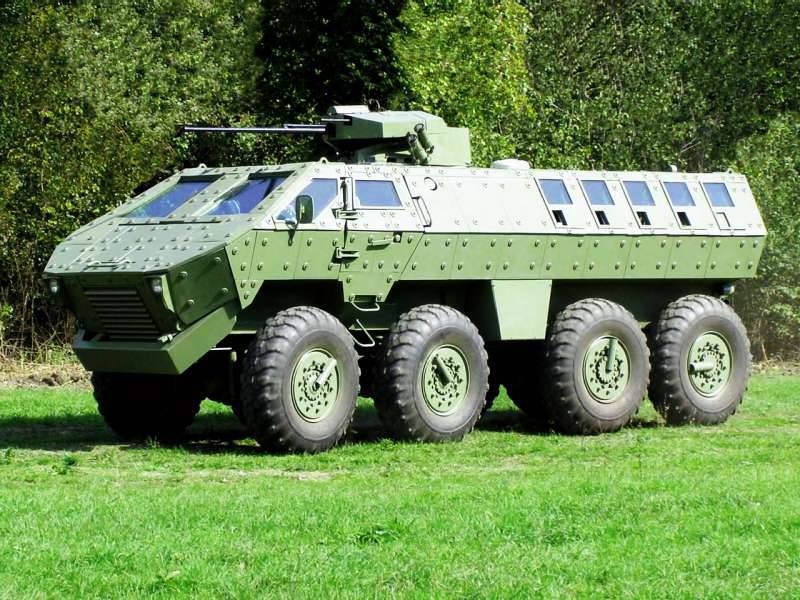 The TAM-150 Т7 off-road truck chassis was chosen as the base for the new BTR. In this case, already during the design work, it was found that the characteristics of this chassis are insufficient. Therefore, the chassis has undergone significant processing. In the end, "Lazar" got all-wheel drive chassis 8х8 with hydraulic suspension.

The original armored hull mounted on this chassis is characterized by a rather high protection performance. In the basic version, the manufacturer guarantees protection at the 3 level in accordance with the STANAG 4569 standard. The armor of an armored personnel carrier must withstand the hit of the armor-piercing bullets of the 7,62 × 51 NATO cartridge or the B-32 armor-piercing bullet of the XDUMXX7,62R SVD sniper rifle from a distance of more than 54 meters. At the same time, at the request of the customer, additional protection modules can be mounted on the body of the combat vehicle, which will increase security to the 100 level according to the STANAG 5 standard (the forehead will withstand an 4569-mm armor-piercing projectile). In addition, the manufacturer talked about the possibility of installing additional tools - dynamic protection and lattice protivokumulyativnyh screens. Under certain circumstances, they will be able to provide the armored personnel carrier with protection against RPG cumulative grenades. And the use of a V-shaped bottom in a combat vehicle, combined with the use of special anti-traumatic seats and encapsulation of the hull, provide the landing force and crew with protection from a blast wave of a mine or a landmine blown under the wheel and equivalent to 25 kilograms of TNT. The combat mass of an armored personnel carrier with a maximum range of additional protection is approximately 6 tons.

The crew of an armored personnel carrier, consisting of three people, is placed in front of the vehicle. A landing force consisting of a 10 man is located behind the command and control compartment. In this case, the paratroopers can leave the armored personnel carrier both through armored doors in the aft part, and through emergency hatches located in the roof of the BTR hull. 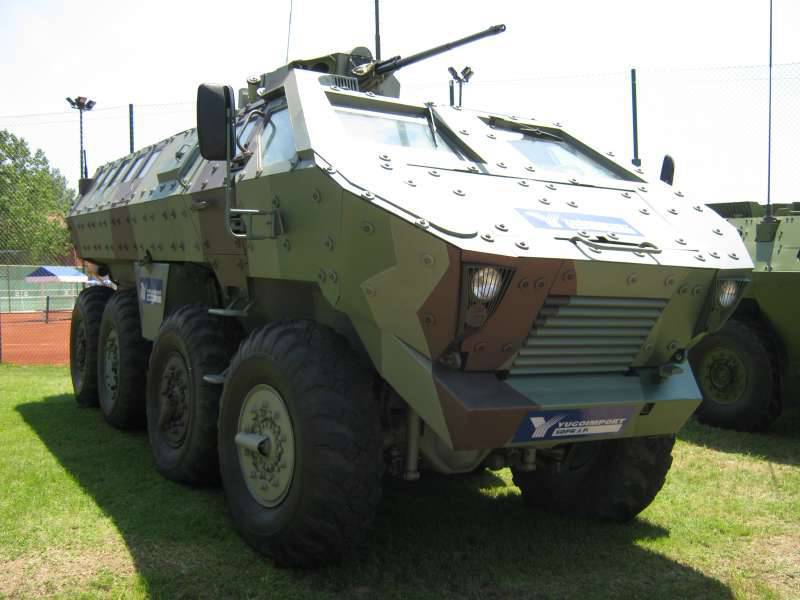 In front of the armored hull “Lazar” there is a diesel engine that develops the power of the HP 440. With this powerplant, an 19-ton armored personnel carrier is able to travel on a highway at speeds up to 90 km / h, overcoming fuel to 600 kilometers on one refueling. When installing on the BTR additional booking modules, these figures can change significantly, which, however, has almost no effect on the overall combat capabilities of the armored personnel carrier. Additional armor is needed for fighting in urban environments where high speeds are not so critical.

Directly behind the engine are the jobs of the commander and driver. Observation of the road and terrain, they lead through large front and side (side doors) windows covered with bulletproof glass. These armored glass provide protection for the third level of the standard STANAG 4569. Similar armored glass installed in the windows of the troop compartment, 12 total armored glass (5 on board and two in the stern door). To sit in the APC and leave his driver and commander can both through the troop compartment, and through individual doors in the sides of the hull. These doors are located next to their seats and open by turning forward.

Immediately after the control department there is a fighting compartment in which the combat module and the gunner-operator’s workplace are mounted. In the standard version, the BTR is equipped with a remotely controlled combat module with an 20-mm M55 cannon and an 7,62-mm machine gun paired with it. Also on the armored personnel carrier there are 4 launchers for smoke grenades. Considered options for installing on the BTR of other weapons: 30-mm automatic grenade launcher, new 30-mm automatic cannon, 12,7-mm large-caliber machine gun M87 and an improved version of ATGM "Malyutka-2". The option of installing a habitable tower weighing up to two tons was also worked out. The armament complex of the Lazar armored personnel carrier is paired with an automated Serbian MSA. 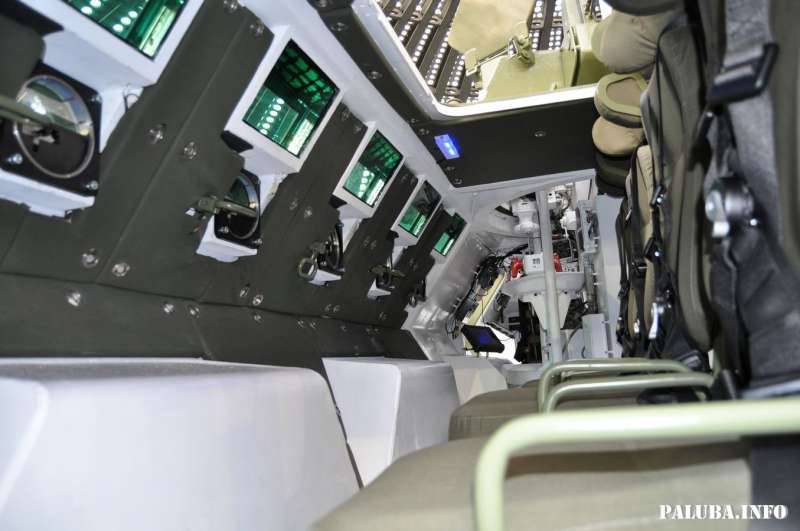 In the aft part of the body of the armored personnel carrier there is a rather spacious troop compartment that takes up about half of the total length of the combat vehicle. An interesting feature of this BTR was the location of the fighters in the body: they sit in two rows facing the sides. This arrangement is not characteristic of MRAP class armored vehicles, but allows the landing force to fire at the enemy from personal weapons through the embrasures that are available in the sides of the hull. Loopholes, which in the normal state are covered with valves, are located directly under the observation windows. For landing and disembarking members of the landing force in the stern sheet of the hull there are two doors, which are separated by a stand. Outside the hull, under the doors, there are footboards that should facilitate the landing and landing of the landing party.

The Lazar armored personnel carrier, like any other model of modern armored vehicles, was equipped with satellite navigation and communication systems, a filtering unit, and a number of other special systems. If necessary, the BTR can install a system designed for circular video surveillance of the terrain. According to the representatives of the Serbian Ministry of Defense, on the basis of the Lazar BTR, it is possible to expand the production of other armored vehicles - command and staff, BREM, medical evacuation vehicle, SAU, 120-mm self-propelled mortar, self-propelled air defense missile system, etc.

The machine is actively promoted for export, its mass production began in 2008 year. Armored personnel carrier supplied to the armed forces of Serbia. At the same time, according to information from a number of sources, Serbia sent a certain amount of these armored personnel carriers to Bangladesh, while the number of vehicles sent and the amount of the contract were not disclosed. 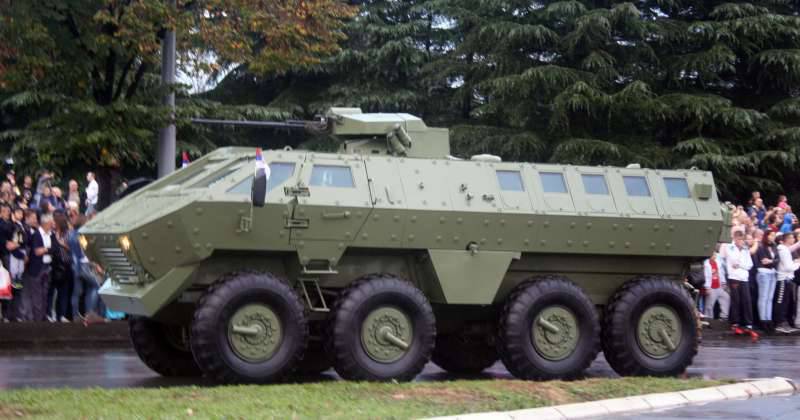 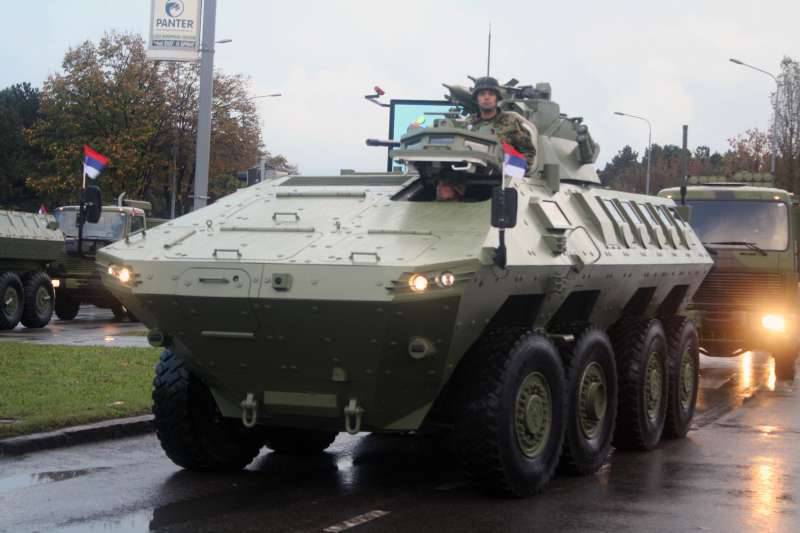 Due to changes in the frontal part of the hull, the instrument panel of the driver also changed. Some of the devices on this model were located slightly higher in comparison with the predecessor. At the same time, the armored hull of the updated Lazar has become several centimeters longer and much wider (2,75 meters against 2,4 meters). As a result, the combat weight of the machine has grown to 24,3 tons. In order to compensate for the increase in mass, the engineers of Yuguimport equipped the armored vehicle with a more powerful engine that develops the power of the 480 hp. Replacing the power plant allowed the developers not only to maintain the driving performance of an armored personnel carrier at the same level, but also slightly improve them. Now the maximum speed on the highway reached 100 km / h.

The troop compartment of the Lazar 2 armored personnel carrier did not change much, with the exception of the appearance of anti-shielding protection from materials based on aramid yarn, which was installed on the inner surface of the hull. Inside the troop compartment, 10 soldiers with personal weapons can still be accommodated. At the same time, the rear door was changed for landing. On the first version of the armored personnel carrier, it was double-winged, the doors of the door opened to the left and to the right. On the Lazar 2 armored personnel carrier there is a ramp in the stern, which leans down when it drops, the paratroopers easily leave the APC.

The model of an armored personnel carrier presented in 2013 was equipped with an uninhabited (optionally habitable) turret with a new 30-mm automatic cannon and ATGM launchers. Both the turret and the cannon are developed by the Serbian company Zastava Arms. According to the developers, the mine action and ballistic protection of the combat vehicle correspond to the 4 level of the STANAG 4569 standard. Satellite navigation system and communications on this model have been updated.

In the framework of the exhibition “Partner 2013”, Serbian Defense Minister A. Vucic spoke about the fact that he had already managed to sign a contract for the supply of a new armored vehicle to Pakistan. Information about the signing of an agreement between Pakistan and Serbia for the supply of 20 armored carriers Lazar 2 worth about 12 million dollars appeared in the media in the winter of 2014. Highly protected armored personnel carriers were purchased for the needs of the Pakistani police from the southern province of Sind. The delivery of the machines was to be in two batches. Earlier there was information that the representatives of Pakistan initially showed great interest in this car and, possibly, partially financed its development. According to the Serbian press, Bangladesh and Kenya are also showing interest in this combat vehicle. 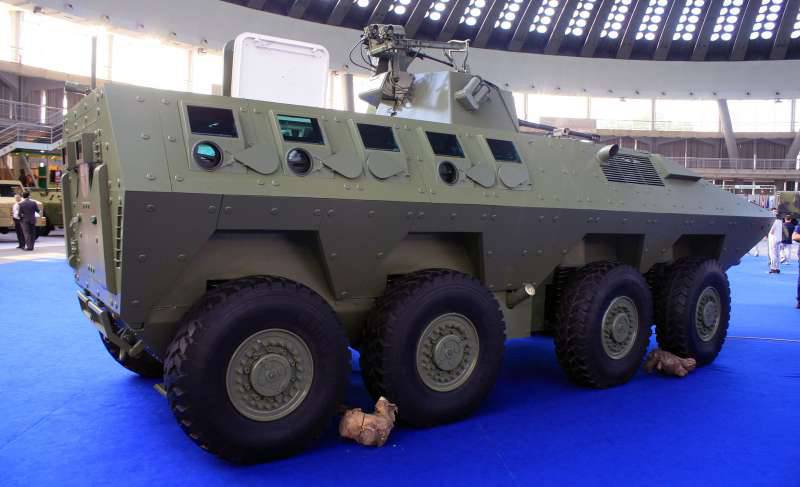