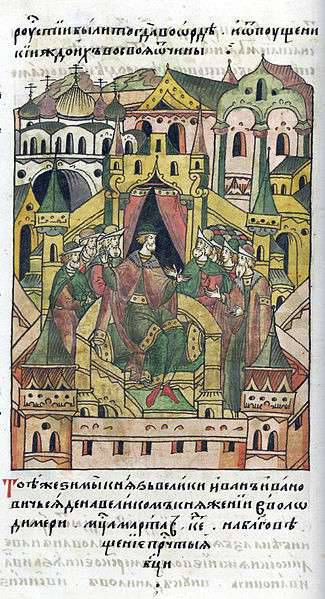 690 years ago, 30 March 1326, the Grand Prince of Moscow and Vladimir (1353-1359) Ivan II Red was born. Ivan Ivanovich was born in Moscow. He is one of the sons of Ivan I Kalita and his first wife, Princess Elena. According to the chronicles, Ivan got his nickname “Red” because of his pleasant appearance (ie, from the word “beautiful”). But there are his other nicknames - “Merciful” and “Meek”.


Ivan succeeded to the throne after his brother Seeds Proud (1318 — 1353). Semyon and Ivan were the children of Prince of Moscow Ivan I Danilovich Kalita (1283 - 1340) and Princess Elena. Ivan received the same name as his father, but in honor of another saint - not John the Baptist, but John of the Ladder (on the day of whose memory he was born). Three years after his birth, in 1329, Ivan Kalita erected a church in the Kremlin in honor of John of the Ladder.

The thirty-three-year life of Ivan Ivanovich is relatively poor in events. Apparently, thanks to his character, quiet and peaceful. Before he became prince of Moscow, the chronicles mark only a few trips to the Horde and an unsuccessful campaign against the Swedes. In 1339, when he was 13, he accompanied his father, Semyon and Andrew, to the Horde. In the autumn of the same year, Ivan had once again visited the Horde and left the Horde kingdom already in the winter, with a reward and, as the chronicles write, with love. Then, with his brother Semyon after the death of his father, he visited the Horde: in 1341, 1344 and 1351. In 1347, he went on a campaign against the Swedes. Arriving in Novgorod, Ivan learned that the Swedes had taken the Orekhov fortress, however, for some unknown reason, he came back.

In 1353, Semen Proud passed away. The grand duke died of a "pestilence" (the great plague epidemic). Under the will of his father, Ivan Ivanovich got the village of Zvenigorod, Ruza and another 21 village. Another third of the lands of the Moscow principality from the will of Ivan Kalita (the main cities of Mozhaisk and Kolomna) later also transferred to Ivan Ivanovich, because together with Semyon Ivanovich both his sons died in the plague. A third of the younger Ivanovich Andrei (first of all, Serpukhov and Lopasnya), who also died during the plague, passed to his son Vladimir (the future Brave).

In the same year, all the Russian princes went to the Horde, so that the Khan chose the new Grand Prince of Vladimir, who was considered the eldest in Russia. The main rival of Ivan the Red was Prince Suzdal Konstantin Vasilyevich. Novgorod sent an ambassador from himself, Semyon Sudakov, to ask the Horde king for Prince of Suzdal. They were offended by Ivan Kalita and the Seeds of Proud, who were trying to bend under Novgorod. Novgorodians did not expect for themselves good from the heirs of the great princes of Moscow and did not want to see the descendants of Ivan Danilovich on the grand-ducal table. However, Khan Chanibek put on the great reign of Moscow Prince Ivan II Ivanovich. 25 March 1354. Ivan sat down on the great reign in Vladimir.

At first, neither Suzdal, nor Ryazan, or Novgorodians recognized his grand-ducal rights. Offended Novgorod a year and a half were with the Grand Duke without peace, but before the war it did not come, and then both sides made peace.

The reign of Ivan the Red was a period of relative weakening of Moscow and the strengthening of its neighbors and opponents. The Grand Duchy of Lithuania achieved the approval of a separate metropolitan in Kiev. The successor of Theognost Alexy was arrested in 1358 year by order of the Lithuanian prince Olgerd in Kiev, where he stayed until 1360 year, and then escaped from custody. Olgerd captured the Bryansk principality and went to Mozhaisk.

In Tver affairs Ivan Ivanovich supported Prince Kashinsky Vasily Mikhailovich, who occupied the Tver grand prince's table. When, in 1357, the Tver princes, uncle and nephew, Vasily Kashinsky and Vsevolod Alexandrovich Kholmsky, who claimed to be the grand prince's table, quarreled, the Grand Duke of Moscow and Vladimir supported Vasily. In 1358, the Moscow and Tver rati jointly went to take away Rzhev from the Lithuanians, which they did. True, Lithuanian troops soon recaptured the city.

Ryazan principality strengthened. Soon after Ivan Ivanovich went to the Horde, the people of Ryazan with their young prince Oleg Ivanovich (the future famous commander) seized Lopasnya (Blade) with a sudden blow. The fortress was located on the right bank of the Oka at the confluence of Lopasni, opposite the mouth of the last, and was of strategic importance to the Moscow principality. Earlier Lopasnya was part of the Ryazan principality, as was Kolomna. The Moscow governor, Prince Mikhail Alexandrovich, was captured and held until he received a ransom. Returning from the Horde, Ivan Krasny did not begin a war with Ryazan because of the city, which belonged to the lot of his juvenile nephew, Prince Vladimir Andreyevich of Serpukhov and gave him other lands.

With Nizhny Novgorod-Suzdal Grand Prince Konstantin Vasilyevich, Ivan Ivanovich reconciled only a year before his death. Khan retained the label for Ivan Red. But after the death of Ivan, the label was in the hands of Dmitry Konstantinovich, and the heir Ivan Ivan had to return the great reign by force, also using distemper in the Horde.

The reign of Ivan the Red was weak, so Moscow was not able at that time to take advantage of the unrest that had begun (“jam”) in the Horde. Khan Chanibek, whom the Russian chronicles called Good, was killed in 1357 by supporters of his son Berdibek. Supporters of Khan Berdibek also killed 12 of his brothers, thus making Berdibek the only legitimate heir to the Golden Horde throne. Berdibek himself was killed in 1359 year. As a result, from 1359 to 1380, the year on the throne of the Golden Horde replaced more than 25 khans, and many uluses (regions) tried to become independent. A year before the death of Ivan Red, the Horde prince Mamat-Khozha came to Ryazan and sent to Moscow to announce the Grand Duke of Moscow and Vladimir, that it was necessary to draw precise and inviolable borders between the Ryazan and Moscow lands. However, Ivan Ivanovich did not let the prince into his land.

Ivan Ivanovich Krasny died in Moscow on November 13 1359 of the year in the sixth year of his reign. He was buried in the Kremlin's Archangel Cathedral. Two of his sons, Ivan bequeathed possessions left by Ivan Kalita, respectively, to Semen and him. After the speedy death of the younger son of Ivan the Red, the possessions were again united under the rule of the Moscow prince.

Ivan Ivanovich was married twice: 1) with 1341 on Princess Feodosiya, daughter of Bryansk Prince Dmitry Romanovich, she died a year or so later; 2) on Alexandra, from the noble Velyaminov family. The children of Ivan Ivanovich were only from the second marriage: Dmitry (Donskoy), Ivan Small (died during the plague epidemic in 1364), two daughters - Anna, the future wife of Prince Dmitry Bobrok-Volynsky, and an unknown daughter named as Lithuanian Prince Dmitry Koriatovich.

Thus, during the short reign of Ivan the Red, Moscow Russia did not increase, but did not lose its previous conquests.