Our gunsmiths have something to be proud of. Russia is among the main exporters of military products. However, despite maintaining a leading position, there is at least one market niche where the Russian military industrial complex has surrendered Soviet positions and does not demonstrate new export achievements.

It is about the small market weapons. Due to the low cost of products, it accounts for a few percent of the world turnover of MPP. This market is small in terms of money, but it has a great status and symbolic value for our country.

No matter how high-tech the armies of the world become, fighting does not take place without the participation of infantry in one form or another, and it needs small arms. Fighting them. If not the army, then special forces, anti-terrorism and police forces, border guards and coast guard, structures to curb drug trafficking. At the same time, a purchased fighter squadron or a warship can serve 30 – 40 for years of its life cycle, without participating in any combat. Accordingly, by the way a “shooter” behaves in a real battle, foreign users are often judged on the overall quality of the defense products produced in a particular country.

Russian weapons have a good reputation on all continents, primarily due to the legendary reliability of their main symbol - the Kalashnikov assault rifle, although, say, to the Russian military aviation buyers often have complaints about operational reliability or a lower availability factor compared to Western technology.

But for all its brilliant reputation, the sale of Russian small arms abroad leaves much to be desired, without any comparison with the export success of aircraft, tank and shipbuilders.

In the post-Soviet time, there are only four major contracts in our account. Two of them are related to the Venezuelan era of Hugo Chavez, another Rosoboronexport signed a test batch of AK 2014 series for Indonesia in November 100 for Indonesia, and 2015 thousand automatic machines were supplied to the security forces of Afghanistan in 10. In general, it is not indicative of a country that once supplied its small arms to two thirds of the countries of the world.

Many traditional markets for the domestic "shooter" are lost. Moreover, the Russian positions weakened significantly after the decision of the Vietnamese People’s Army to switch to Israeli-designed Galil ACE 31 and ACE 32 assault rifles (for more details, see the article “Chasing Soviet Reliability” on page 09). The country that defended its independence in a fierce battle with the strongest military power of the world with our weapons, has now chosen Israeli machine guns.

Although it would seem, all in favor of the development of such exports. The presence of one of the oldest and most reputable weapons schools, good operational reputation, the most well-known brand in the arms world, low cost due to inexpensive resources and cheap (unfortunately) labor.

Let's try to figure it out. Of course, there are objective external factors weakening Russian export positions. The small arms market is an environment of fierce competition. In recent decades, new players have been added to the old arms weapon competing countries - the USA, Germany, Italy, Belgium, Austria, Switzerland. These are Israel, China, South Africa, Singapore, Turkey, Brazil, South Korea and others. Someone takes the name and quality of products, someone - futuristic design and new materials, and someone - low cost. Many use leverage of state financial and political support to promote their weapons.

However, the very presence of high and not always correct competition does not explain why we lose it when it comes to military exports. It is also necessary to understand the development trends of both the market itself and small arms, and to what extent our proposal meets them, which means it meets the requirements of foreign customers.

Business on the "kit"

What is the most important trend in the development of small arms in the past two decades? Such a concept as customization came to the fore, customized for individual customer requirements. It's about solutions that allow you to optimize weapons for performing certain tasks, for individual characteristics of potential consumers of products, and often the wishes of a single shooter. Replaceable barrels, folding butts, pistol grip on machine guns, target designators, tactical lights, bipods, various sights and optical devices - all this is today an important product component of the shooting market. 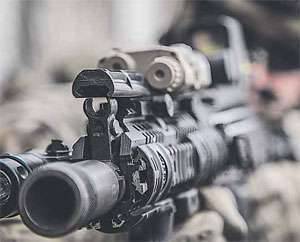 Why "body kits" have become a trend? Firstly, the reserves for the development of handguns have been exhausted to a certain extent. Designers of small arms are tied to the ammunition of old calibers, where, in general, everyone has already tried and invented something revolutionary in the design of an assault rifle or pistol is extremely difficult. Secondly, the professionalization of armies and other security forces. Requirements for weapons from competent users have grown: the professional pays more attention to his weapon, how it helps to accomplish the combat mission, how it fits to its anthropometry, how it corresponds to its preparation and individual habits. Thirdly, the rapid growth of the so-called conflicts of low intensity. The weapons developed during the Cold War were optimized for general combat in the open air of the European theater of operations. To adapt it to the more typical now conditions of urban combat or sharply rugged terrain is precisely what “body kits” allow.

Therefore, customization and individualization of small arms are the main development trends, the cultural trail of which through cinema and television is noticeable even to ordinary people. Even the children and housewives know the phrase “Picatinny Planck” today. For many weapons lovers, it remains a mystery why it took almost two decades for this simple invention of the American Picatinny Arsenal to appear on Russian small arms. Moreover, in the same United States, several companies produce their own versions of fastening straps for all types of AK, SVD, our hunting carbines, earning often more money than Russian manufacturers of their own weapons. Someone is inclined to explain this paradox by the fact that, they say, our manufacturers are either not aware of trends, or are lazy. Of course, this is not so: professionals working in the industry are well aware of both market trends, the reason for the loss of our positions, and what needs to be changed.

"Thank you, we will buy from the Chinese"

The main obstacle is bureaucratic. Russia has one of the most stringent and restrictive export control systems in the world for military products. The only state mediator and licensing system based on decisions made at the very top. The disadvantage of such a strict system is, first of all, the long time of its reaction. And it doesn't matter what you supply: combat aircraft, naval equipment, automatic weapons, and even “body kits” to them - these are all military products, the licensing of deliveries of which passes by the same rules. If no one is usually in a hurry to buy planes or a submarine (Indians have been buying fighters for 15 for years), then small arms are often urgently needed. The political situation worsened, the criminogenic situation, the militants invaded - you need a weapon. How much do you say wait for time to make a decision and go through the procedure? Half a year? Year? Thank you, we will buy from the Israelis or the Chinese.

Secondly, frank sticks in the wheels of Russian manufacturers of small arms look for the requirements of having a passport of export appearance (PEO) and advertising passports for each sample, as well as a clear correspondence of the products supplied.

These passports are a purely domestic invention. Americans, Germans or Israelis have nothing like that. For each sample supplied, our manufacturer must compile a passport, where to indicate the performance characteristics, composition and packaging, differences in the export version from the analogue (prototype) created in the interests of the Russian customer, requirements for limiting access to products and documents intended for transfer to foreign buyers, and others data. The PEO is sent for approval to the head of the Department of Intellectual Property, Military-Technical Cooperation and Expertise of Supplies of Arms and Military Equipment of the Ministry of Defense and Deputy Director of the Federal Service for Technical and Export Control. Then it is approved by the first deputy head of the military department. After the passport has been approved, neither the TTX nor the package of the product supplied can be changed. They need a new passport and restart the procedure from the very beginning.

The idea of ​​a passport (the state, they say, is alert so that no one puts anything of poor quality or secret) is somehow justified in the case of complicated equipment - submarines, rocket complexes, combat aircraft and helicopters, but loses all meaning when it comes to about small arms or other relatively simple military products. Implement the very customization of weapons with such a system is almost impossible. The customer asks to add a kit to the kit or make small changes to the design, but you cannot do it quickly, because they are connected with an export passport. And the order goes to competitors.

No need to think that it is understood only now. The Union of Russian gunsmiths, uniting the leading enterprises of the industry, has been fighting for several years to simplify the decision-making procedure for the export of small arms, as well as to abolish the PEO and other means of close combat. The corresponding appeal to the authorities was made at a general meeting of the Union of Russian gunsmiths in March 2011. Then Mikhail Timofeevich Kalashnikov was alive, who sent a letter to Vladimir Putin (at the time - to the Prime Minister).

“The presence of export passports for samples of small arms that initially determine their performance and equipment, puts Russian companies at extremely disadvantageous conditions compared to foreign competitors who do not have such restrictions, and, of course, does not allow for promptly taking into account the wishes of potential foreign customers by the need to change A PEO for any insignificant change in performance characteristics or a complete set is a long and laborious process, ”the illustrious designer wrote.

However, the letter was chewed up by the gears of the bureaucratic machine: there were no changes. Until now, the Russian rifle industry and its manufacturers are limited in the export issue. Today, the adoption of such a decision to simplify the procedure for issuing permits for the supply of military equipment could significantly strengthen the export position of our rifle industry.

To address this issue, the Union of Russian gunsmiths offers concrete steps: to split defense articles by types and complexity of products. With regard to the nomenclature of “uncomplicated” products (small arms, grenade launchers, melee weapons, ammunition), simplify the procedure for coordinating and approving export-type passports and advertising passports.

I ask all those interested in the development of the arms industry to support this sound initiative.