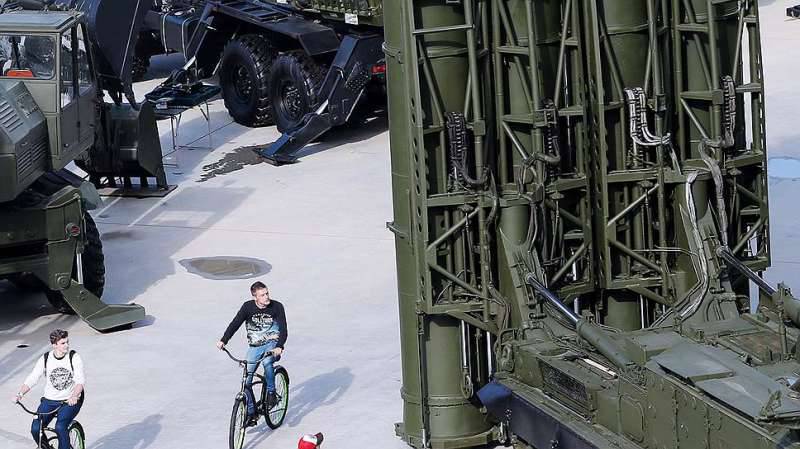 Russia spent 33 billion rubles on a military operation in Syria, but it could earn much more. Combat use of Russian weapons in the Middle East it has become the best advertisement for buyers: the amount of potential export contracts, according to the calculations of "Money", in the coming years can reach $ 6-7 billion.

The air operation in Syria began on September 30, when bombers from the Russian air group formed in Latakia struck the first blows against the positions of the Islamic State (IG; prohibited in Russia). Since then, high-ranking officials have explained interference in the course of the ongoing war in the Arab Republic with considerations of national security. “The only sure way to fight international terrorism is to act in advance, fight and destroy militants and terrorists in the territories they have already seized, not to wait until they come to our house,” this is how Vladimir Putin justified the beginning of the Syrian campaign.

With a speed of 8 million rubles per hour

Five and a half months of the operation of the aerospace forces (VKS) of the Russian Federation in Syria cost Russia more than 33 billion rubles. This was stated by President Vladimir Putin. Accordingly, one hour of work aviation Russian aerospace forces in Syria cost the Russian budget 8,2 million rubles. Mr Putin explained that the funds for the operation were allocated from the budget of the Ministry of Defense
However, in addition to purely political dividends, Moscow is also counting on a serious economic return, associated primarily with a significant increase in the demand of external customers and the Russian Ministry of Defense for weapons and equipment, with the help of which military operations were conducted in Syria. For example, Sergey Chemezov, the general director of the Rostec state corporation, said in September that when the situation in the world exacerbated, orders (for the purchase of weapons, money) would increase.

For six months, the Russian military has turned the Syrian land de facto into a testing ground. At first, they relied more on proven equipment, such as upgraded Su-24M bombers and Su-25SM attack aircraft, but they soon connected Su-34 bombers, Su-30SM fighters and, finally, the latest Su-35S. Mi-8P, Mi-24, Mi-35M, Mi-28N and Ka-52 helicopters were also flown to Khmeimim, and the air base itself was covered by a dense ring of Pantsir-S1 anti-aircraft missile and gun systems, as well as air defense systems " Buk-M2 "and S-400" Triumph ". From land equipment to Syria were transported Tanks T-90 and armored personnel carriers BTR-82A. To strike at targets, not only old bombs like the FAB-250 or OFAB-500 were used, but also the modern KAB-500S, as well as the X-101 and X-555 cruise missiles. The latter were intended to overcome powerful enemy air defense systems, which, by the way, the IS did not have. Attacks by Caliber-NK missiles from the waters of the Mediterranean and Caspian Seas are generally different: 48 launches showed the technical capabilities of the products.

According to the Deneg source, involved in military-technical cooperation with foreign countries, now potential customers are eyeing the "proven weapon" - either in service with the Russian Defense Ministry, or already purchased by another country. "In Syria, we killed two birds with one stone," he says. "On the one hand, we demonstrated the combat capabilities of the equipment, attracted the attention of customers, and on the other, drove more than half of the existing flying personnel in combat conditions." It is noteworthy that in Syria, in addition to military profits, representatives of manufacturers of the latest technology: although all of it was put into service by the Russian army, the military decided to insure themselves with specialized specialists - in some cases it was easier for them to prepare equipment and weapons for performing tasks.

Six months of the operation cost the military 33 billion rubles: this money was included in the budget of the Ministry of Defense for conducting exercises and combat training, but were invested in a real war. According to the "Money", this amount takes into account all logistical and logistical costs. Another about 10 billion rubles. may be required for the replenishment of arsenals by means of aviation destruction and for factory repair of aircraft. Its total raid for six months amounted to over 9 thousand hours. Such intensity could not but affect the flight resource, for example, Su-24M and Su-25CM, which have already survived more than one modernization and repair. 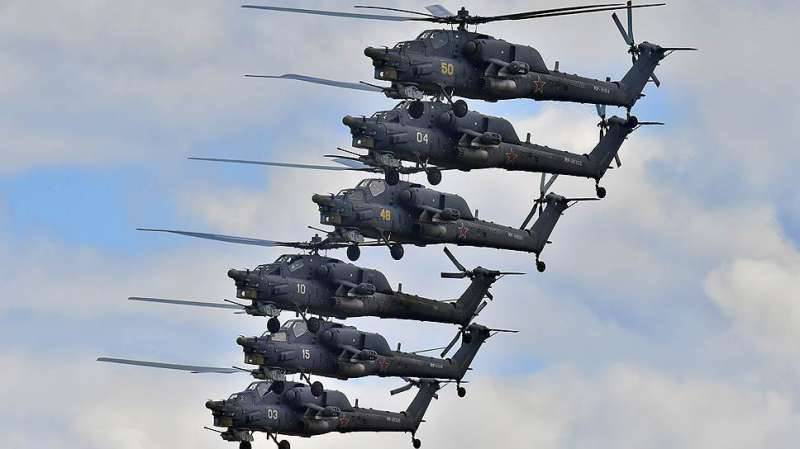 It has become much easier to sell all military equipment flying and shooting in Syria: no one has yet invented any better marketing than participation in military operations.
Photo: Dmitry Lebedev, Kommersant

However, even these costs do not seem excessive against the expected dividends. As several military sources told Deneg, after the start of the Syrian campaign, the Federal Service for Military-Technical Cooperation (FSMTC) received a lot of calls from countries looking to the products of Russian defense enterprises, most of them wanting to purchase aircraft. For example, in December 2015, an application for 12 Su-32 bombers (an export version of Su-34) was received from Algeria. According to the director of the Novosibirsk Aviation Plant named after Chkalov Sergey Smirnov, such negotiations have been going on for about eight years, but it all happened in a sluggish mode. However, the successful operation of the bomber in Syria gave new impetus to the negotiations: according to "Money", the first squadron of the Su-32 will cost the Algerian military no less than $ 500-600 million, the option to purchase more 6-12 machines is not excluded in the future. Along with these negotiations, Algeria requested one Su-35C for testing at the Tamanrasset test site in order to check the flight characteristics of the vehicle, the capabilities of radar equipment and armament. The interlocutors of Deneg claim that the Algerian pilots made a tested sample and are now waiting for the start of pre-contract negotiations on the purchase of at least ten such fighters. A firm contract for such a number of machines is estimated at about $ 850-900 million.

This year, negotiations will continue on two military transport aircraft Il-76MD-90А (in case of signing a contract this year, Algeria should receive two aircraft already in 2017-m). Another achievement can be considered the conclusion of an agreement to supply the same country about 40 combat helicopters Mi-28НЭ, the first batch of which is already ready for shipment. It should be noted that the role of the Syrian operation in this case is somewhat lower, since earlier these machines had already been acquired by Iraq for fighting the IS. But in any case, the Algerian contract for the Mi-28HE is estimated by experts at $ 600-700 million.

Su-35 fighters are also interested in Indonesia, Vietnam and Pakistan. Each of these countries has experience in operating Soviet and Russian aircraft, but the parties want to significantly modernize their fleet. Indonesia and Vietnam want to take the Su-35 in addition to the previously acquired Su-30MK2, and in Jakarta they talk about ten cars, and Hanoi, according to "Money", intends to talk about buying a squadron. In both cases we are talking about contracts worth over $ 1 billion, and the Indonesian military may be asked for a loan for this purpose.

In the case of Pakistan, the situation is somewhat more complicated: in addition to the difficult economic situation, the geopolitical aspects related to India interfere with the potential deal. The acquisition of four Mi-35 by Islamabad was perceived negatively by Delhi, so Vladimir Putin had to personally explain to Indian Prime Minister Narendra Modi that they would be used exclusively to combat IS. The interlocutors of "Money" say that the Pakistani military, with the most positive scenario, will be able to purchase not too many fighters - no more than six. But even such a deal will be valued at about $ 500 million.

There is an interest in the Ka-52 "Alligator" helicopters: on the line of Rosoboronexport, Egypt has been contracted for 46 machines, which will begin to be delivered in the 2017 year. It is expected that the demonstration of their combat capabilities in Syria will help find new customers primarily in the Middle East.

The case with the T-90 tank, which was transported to Syria both to protect Khmeimim and to cover the government troops of Bashar al-Assad, advancing on the positions of the IG, stands alone. On the frames of video filming, leaked to the Internet, captured the moment of the shot at the Russian tank from the American anti-tank missile system TOW. Armor T-90 shot survived. This example will now be used in negotiations with clients, said a top manager of one of the defense enterprises. These clients include Iraq, Iran, other Gulf countries, and the CIS.

On these days, the VKO Almaz-Antey concern is taking part in the DefExpo-2016 exhibition, where it will demonstrate the models of the Caliber-PLE and Caliber-NKE integrated missile systems.

Despite the fact that in the Syrian campaign, air defense systems were used only for detecting, and not hitting targets, the demand is high for them, according to sources of "Money". The appearance of C-400 in Syria sharply increased the interest in this product from the army of Saudi Arabia, and also intensified negotiations on this issue with India. In each of these cases, we can talk about acquiring from four to six C-400 divisions, that is, about $ 2-3 billion, depending on the number of launchers.

According to the most approximate expert estimates, the marketing effect of the Syrian campaign could lead to the appearance of contracts worth about $ 6-7 billion (about 420-490 billion rubles at the current exchange rate). Konstantin Makienko, deputy director of the Center for Analysis of Strategies and Technologies, notes a real surge of interest in Russian products, but stresses that "this has not yet manifested itself in the form of solid contracts." It is clear that various obstacles may arise in the way of carrying out transactions: technical (for example, loading enterprises with other orders), financial (lack of money from the customer), force majeure (a revolution in the country or a military conflict with a supplier). However, even a decrease in the potential gain of $ 1-2 billion will not be critical, says a high-ranking source of money in the government: "Given the exchange rate difference between the ruble and the dollar, we will in any case kill the Syrian costs in the foreseeable future." True, for this you need to start contracting right now: taking into account the production cycle of products, the final calculations will be made no earlier than in two to four years.