Dying is better in battle than in hospital 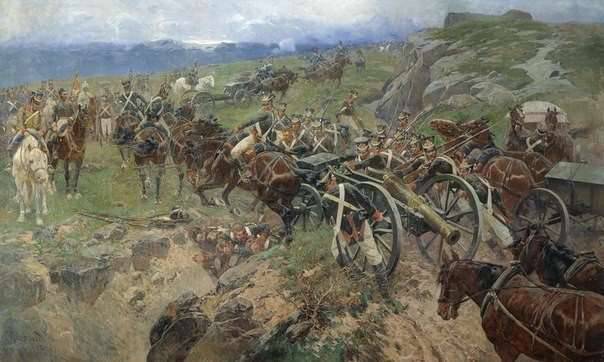 Great powers love to miss something that is bad. Should any country weaken, so unexpected guests are immediately declared on warships, or in the form of an invading land army.

And there are more subtle methods of enslavement. They bribe officials, nashpayut the ruling elite with their agents of influence, and so on.

The fate of such a state is sad. He is robbed, forced to fight for the interests of others, the processes of decline are accelerated, and as a result, the backwardness from world leaders only increases.

An example of this is Iran (Persia) at the beginning of the 19th century, which became the object of close attention of England and France. In particular, Paris and London sought to use Persia in their plans to contain Russia. In 1795, French diplomats set off for Tehran. They were given the task of convincing the shah to start a war against Russia. England did not lag behind, and soon the embassy of Captain Malcolm arrived in Iran. The Briton immediately began to hand out money to the left and to the right, attracting officials of the shah's court to his side.

In the end, he managed to conclude an economic and political agreement. Iran has pledged not to let the troops of any European country through its territory go to India, and in addition, England has received the right of duty-free trade for some of its goods. In return, the shah was offered financial support, weapon and military specialists.

In this regard, it is appropriate to quote John Malcolm: "If Russia had not crossed the Caucasus Mountains, the relations between England and Iran would have a purely commercial nature, these are Russia's ambitions forcing us to preserve what is clearly necessary for our own defense."

However, under the influence of Napoleon's victories, the Shah decided to reorient himself to France. He terminated the contract with London and agreed to miss the French army, in case it meets on an Indian campaign. In turn, Paris pledged to force Russia to leave Georgia and the Caucasus.

The implementation of these plans was prevented by the defeat of Napoleon, and English influence was once again established in Iran. An endless river of bribes to the shah's grandees flowed with him. If anyone had any doubts, against whom England and Persia decided to be friends, the text of the next Anglo-Iranian agreement dotted i. The British, among other things, pledged to support the shah in his intention to create a navy in the Caspian.

While the British and French were making their intrigues, Russia was solving issues by force of arms. There was a Russian-Persian war. It began in the 1804 year, when, at the instigation of the British, the Shah announced an ultimatum to Russia demanding the withdrawal of Russian troops from the Transcaucasus. Petersburg did not succumb to pressure, and then Iran unleashed hostilities.

The main forces of our country were involved in Western theaters, because at the same time there were wars with Napoleon. This gave the Persians a significant advantage, but despite this, the war was unsuccessful for Iran. Russia won almost all the battles.

The first clashes showed the overwhelming superiority of the Russian army. General Tuchkov defeated the Iranians under Gumry, and General Tsitsianov defeated a large army of Crown Prince Abbas Mirza near Kanagir in the summer of 1804.

The 1805 campaign of the year was marked by the great feat of the Russian detachment of Colonel Pavel Karyagin. Under his leadership there were four hundred people and another five hundred were in parts of Major Lisanevich. It was assumed that they would be able to unite, and then the Russians would have nine hundred people. But they were opposed by fifteen to twenty thousand Persians Abbas Mirza.

When off the coast of Askorani, Karyagin met with the main forces of the enemy, it seemed that the Russians had no chance. The numerical superiority of the Iranians was too great, especially since Karyagin acted alone, but failed to unite with Lisanevich. Fortunately, there was a high mound in those places, where the Karyagin detachment quickly dug in.

The Persians rushed to the assault, and the whole day was a fierce battle. By nightfall, the Russians lost 190 people, that is, almost half of the detachment. The mound was still in the hands of the Russians, but there were very few defenders left.

Abbas-Mirza waited for the morning and changed tactics. He abandoned the endless assaults and decided to conduct artillery shelling of our positions. Most of our officers died or were injured. Commander Karyagin himself was contused three times, and after a while he was also shot in the side with a bullet. The soldier left 150 people, besides, the Persians cut off our squad from the water, and the Russians were thirsty. Lieutenant Ladinsky volunteered to get water.

Before the deadly attack, Ladinsky addressed the soldiers with the words: “Let's go, guys, with God! Let us recall the Russian proverb that two deaths should not happen, but one cannot escape, and you know, it’s better to die in battle than in a hospital. ”

Having led the attack on the Persian camp, he captured four batteries, and returned to his own with water and fifteen enemy falcon coins (artillery gun). Karyagin's detachment gradually decreased, Ladinsky was seriously wounded, and on the fifth day of the defense all food was out. A sortie for food failed, and later it turned out that it was headed by a French spy who had somehow joined the Russian army under the name Lisenkov. It was a serious failure, and without that tiny detachment Karyagin lost thirty-five people.

When the cartridges remained quite short, Karjagin decided on a desperate step. He decided to make his way to the Shah-Bulakh castle, take it by storm and hold on to the last. In the middle of the night, the Russians, putting the wounded on a stretcher, took off. The horses were not enough and the guns had to be dragged on themselves.

The next morning Karyagin and his people went to the castle. His small garrison was asleep, in principle, not imagining that someone was capable of attacking him. Taking advantage of the confusion of the enemy, the Russians in a matter of minutes smashed the gate with artillery fire and made their way inside. As soon as ours took up new positions, the whole huge army of Abbas-Mirza was under the walls and began a siege. There were no large stocks of food in the fortress, and after four days of the siege, the Russians ate all the horses.

Karjagin did not lose his courage even in this difficult moment and prepared to stand until everyone died of starvation. He did not think about the surrender of the castle, and at night he sent an Armenian Yuzbash with a task to secretly leak through the Persian order and convey a request for help to General Tsitsianov. Yuzbash brilliantly executed the assignment, and not only got to Tsitsianov, but also returned to the castle with provisions. Unfortunately, Tsitsianov had very few people, and he could not provide any help.

The food was divided equally, making no distinction between soldiers and officers, but it was only enough for a day. And then the brave Yuzbash volunteered to get food. He was given submission to several people, and he conducted several successful sorties. This allowed the Karyagin detachment to hold on for another week. Unlucky Abbas-Mirza again changed tactics. This time he decided to bribe Karyagin, promising all sorts of awards and honors, and even urging him to go to the service of the shah.

Karjagin went to the trick and took four days to think, and demanded food from Abbas-Mirza. So the Russian squad, finally, was able to properly eat and reinforce forces.

When the time came, Karyagin and his detachment secretly left the fortress and captured another fortified point - Mukhrat, more convenient for defense than Shah-Bulakh. The feat of Karyagin and his people thwarted the plans of the Persians to strike across Georgia and gave Tsitsianov time to pull together into a single fist the forces scattered over a large territory. As for the heroic detachment of Karyagin, he eventually made his way to his own.

Upon learning of this, the king awarded Karyagin a gold sword with the inscription "For Bravery", and Yuzbash - with a medal and a lifetime pension. Karjagin, who suffered greatly from many injuries, refused to retire and a few days later went to battle with the army of Abbas-Mirza and again accomplished the feat. His battalion attacked the Persian camp. The name of the Russian commander began to inspire the enemy with horror, and when they learned that Karjagin had appeared, they rushed to run, leaving the guns and banners.

Unfortunately, Karyagin did not live to win the war. The injuries received in the battles, and when in 1807, he fell ill with fever, the body did not cope. The hero was gone, but shortly before his death, Karyagin managed to get his last award - the Order of St. Vladimir 3 degree. In the Russian army, the name of Karyagin was passed down from generation to generation. He became a legend and an example for subsequent generations of soldiers and officers.

And the Russian-Persian war continued. In 1806, Prince Abbas-Mirza was defeated twice. The Russians occupied Derbent, Baku, Echmiadzin, Nakhichevan and Cuba. In 1808, the Iranians tried to attack in Georgia, but were defeated in a battle at Gumra. The following year, indefatigable Abbas-Mirza moved to Elizavetpol (Ganja), but hurried to retire, barely meeting the Russian avant-garde under the command of General Paulucci.

Infinite defeats could not cool down the warlike fervor of the Iranians, and in the summer of 1808, they again attacked Karabakh. There they were again defeated, this time by Colonel Kotlyarevsky under Megri. In September, the Russians again took over the enemy, now under Akhalkalaki.

The English instructors, seeing that without their intervention the Iranians would lose everything, undertook to reorganize the army of Persia. They clearly managed to bring relative order in the combat units of the Iranians, and in 1812, Abbas-Mirza took Lenkoran. And then there was a message that Napoleon entered Moscow.

The scales began to hesitate, and Russia began to think about the urgent conclusion of a peace treaty with Iran, and Petersburg was ready for serious concessions. But here a real miracle was made by a small detachment of Kotlyarevsky, who defeated a huge Iranian army under Aslanduz.

In 1813, Lankaran passed into our hands. This difficult and shameful defeat forced Iran to conclude a peace treaty on Russian terms. Persia recognized the accession to Russia of Dagestan and Northern Azerbaijan.

Ctrl Enter
Noticed oshЫbku Highlight text and press. Ctrl + Enter
We are
Diplomats of the People's Commissariat of Defense: on the eve and during the warEngland vs Russia. Fight for Persia
Military Reviewin Yandex News
Military Reviewin Google News
11 comments
Information
Dear reader, to leave comments on the publication, you must sign in.