March 30 2016
74
In general, there is nothing surprising in the fact that in March 15, one of the representatives of the so-called non-systemic (non-systemic) opposition Alexei Navalny met with "friends of Russia" in a Moscow hotel. There is nothing surprising in the fact that the main “anti-corruption lumberjack” of the country tried to do everything to ensure that this information about this meeting passed as if in passing. But, as you know, everything secret and slippery sooner or later becomes apparent, but because the country learned the names of many “heroes” with whom Alexei Anatolyevich Navalny met and spoke “for life”. I learned from the material LifeNews.


Among those who spoke in favor of an irresistible desire to meet the main anti-corruption wrestler turned out to be:

Bulgarian public man Ivan Krastev, who had previously declared that hardly anyone wants to live in Russia from Russian citizens, but everyone, you know, want to dump from Russia;

Vesela Cherneva, Director of the Greater Europe Program of the Council of Europe for Foreign Policy, Master of Political Science at the University of Bonn, former employee of the Bulgarian Embassy in the USA;

expert of the Center for International Studies and Documents (CIDOB), one of the ardent supporters of the Russian opposition rallies in Moscow, Carmen Claudin, who feels almost sexual satisfaction from having such a “democratic” and “democratic” university as the Higher School of Economics (HSE) in Russia.

There were also 11 representatives of the “friendly conglomerate”. 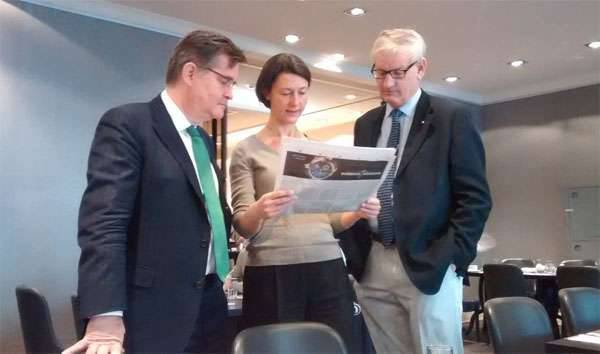 It is noteworthy that all these people are united by a stable antipathy towards the interests of Russia and no less stable sympathy for how to repeat the Ukrainian version of “democratization” in Russia. If we take into account that there is not much time left before the elections to the lower house of the Russian parliament, the desire of this kind of “friends of Russia” to visit the Russian Federation and meet with representatives of the “swamp” stratum of the population at the invitation of representatives of the stratum often becomes clear.

Particular attention is drawn to the fact that Mr. Navalny, who flooded the blogosphere with statements about how he “worked up polymers” in Russia, in his blog decided to superficially acquaint his regular readers with the very fact of the meeting:
Met @carlbildt and his ECFR colleagues. It was interesting to talk about Russian politics, Ukraine and Syria.

However, due to the material on LifeNews, Navalny had to make a more extensive Facebook posting. And with a certain attempt to make claims to those who focused public attention on the contacts of Alexey Anatolyevich. Like, I actually wrote, and in general there was nothing like that in this meeting - like an ordinary meeting. Well, they say, a politician. - Unless, they say, I can not meet with foreign guests of the Valdai Discussion Club. Well, so we understood - ordinary ...

From the column "LifeNews correspondents succeeded."
A delegation of the European Council on Foreign Relations recently arrived in Moscow. They had some kind of event in the framework of the Valdai Forum, and they also wrote to me: we want to meet and ask about the situation in the country. I met - there was a 15 man - I answered questions, I asked them about Syria. Hour and a half sat. The delegation was led by Carl Bildt - the former Prime Minister and Minister for Foreign Affairs of Sweden. After the meeting I am writing on Twitter: I met with Carl Bildt and the ECFR delegation, they had an interesting conversation. Today comes out the "investigation" LifeNews: Navalny held a secret meeting with Carl Bildt. And because they pay money for it. From the budget. Lot.

Here, of course, as usual, the belolentochnye worms crawled, who began to assent to their idol: they say, keep it up Alexey Anatolyevich - he brought these unfortunate journalists out of LifeNews to clean water - you give further to write about how “fucking the interpolymers” ... It’s for the belolentochny worms, it is definitely more important than the purpose for which the ladies and gentlemen from the Russophobia circle decided to talk to Mr. Navalny before participating in the Valdai Forum. But if you take into account the thrust of Mr. Navalny’s stormy activity, the meeting, quite possibly, concerned information preparation for the upcoming elections.

From an interview with the press secretary of the President of Russia Interfax:
We received papers from an organization that calls itself an international consortium of investigative journalism, which includes various media outlets and journalists from different countries. We are sure that not only journalists, but also representatives of other organizations and services. In the coming days, they intend to publish the next works in the Federal Republic of Germany, the United States, Great Britain, France, Switzerland, Russia and several other countries, which we consider to be an obvious order. (...) Judging by the questions asked, there will certainly be statements that Putin is somehow connected, or has some interests in companies. You can continue for a long time - an extensive material. In conclusion, I want to say once again to those journalists who put their signatures, after all to be guided by high journalistic ideals.

Mr. Navalny and Co. can only answer this: “Orient on what? Ahah ... "No, no freaks, these traders with national interests have completely different benchmarks, and therefore we should expect that the publications mentioned by Dmitry Peskov will soon appear on all sorts of" open Russia "," notes of the oppositionist " well and, of course, in non-living blogs, including some Facebook pages.

By the way, about how “randomly” the representatives of a large group of “Friends of Russia” met in Moscow with a “bribe-lumberjack”, spent a lot of time at the Valdai discussion platform. Of materials club from 14 March 2016:

Very entertaining - one of the main Scandinavian Russophobes arrived in Russia to discuss the issue of how relations between the Russian Federation and the EU will be built “after the end of the crisis” ... The very Russophobe Bildt, who after the victory of the bloody Maidan in Ukraine, said that In a way, the country "is on the way to a bright future, without corruption and without Yanukovych." That is, for Bildt, blood is the beginning of the path to a bright future. But if so, then why doesn’t he discuss such an “interesting” version of the path within his native Sweden, and is he eager to take part in discussions on this issue outside its borders? - Russia, Jordan, further everywhere ...

It is worth recalling that Mr. Bildt was at one time a co-author of the so-called “Eastern Partnership” of the EU, the main ideology of which was thoughtlessly drawing Eastern European countries (post-Soviet space) into the zone of US interests, in which even Sweden itself is not more than a puppet character. Bildt also dealt with the questions of the “mediation” of the West and Yugoslavia of the time of Milosevic, when the latter ordered the rupture of diplomatic relations with the United States. What the mediation led to and where Milosevic ended up is well known.

And now, those who call themselves Russian politicians invite Bildt and people like Bildt to discuss the “future” of Russian-European round-table cooperation. Invite ... To Carl Bildt continued his Russophobic campaign with publications in his блоге about how he tried to convey to the Russians that "they committed aggression against Ukraine in 2014 godu" ... And so that Bildt’s comrades in the Russophobic circle declared that Russia lacked democracy and freedom of speech. Interestingly, and in an overly free Sweden they could have invited, for example, V.V. Zhirinovsky, who would tell at a large Swedish forum how Sweden engaged in aiding Nazi Germany in the 40s of the last century? ..

Ctrl Enter
Noticed oshЫbku Highlight text and press. Ctrl + Enter
We are
Results of the week. “You see, every year my friends and I go to the bathhouse. This is our tradition. ”Bulgarian people stand up for Russia
Military Reviewin Yandex News
Military Reviewin Google News
74 comments
Information
Dear reader, to leave comments on the publication, you must sign in.