March 30 2016
484
Well-known showman Andrei Maximov (sitting on his back in the Zhvanetsky TV program) wrote in the Rossiyskaya Gazeta an obese anti-Soviet article “Soviet non-champagne.” Since it sounds like a manifesto of adherents of the present kingdom of the belly, I will quote it in detail: 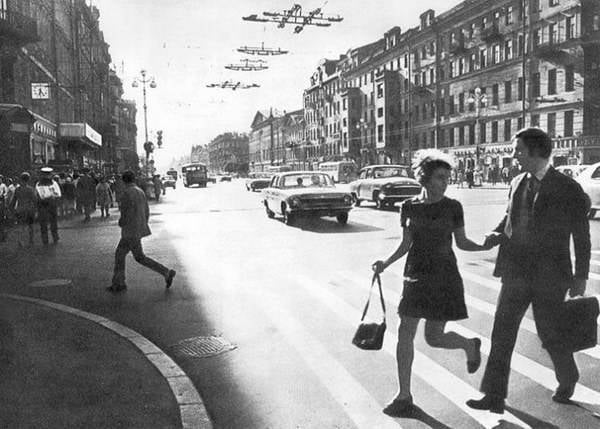 “Russia is a country with an unpredictable past, we really love about history to debate True, sometimes disputes are replaced by a nostalgic love for the Soviet power ... It begins to seem like a spray of champagne: festive, fun, “with a twinkle” ...

But have you forgotten the cry "Threw Chickens!" And the crowd that rushes after the bluish creatures? They forgot what a deficit is, when they did not buy anything, but did they get it? ..

Today it is natural for us that the premiere of a blockbuster takes place simultaneously all over the world, including in Russia ... How quickly we, citizens of the Internet era, forgot what censorship is! Censorship is when the state decides what you can watch, and what you absolutely cannot. The state put films on the shelf, subsequently recognized as great, forbidding writers who are now considered the pride of Russian literature ... "

I also grew up and studied under the Soviet regime and mastered the basics of the profession in the same “Komsomolskaya Pravda”. Only Maksimov was sitting peacefully in the department of culture, and I worked with a lot of complications in the agricultural department, traveling around our entire immense Motherland. And with all its flaws, he saw one of her gigantic dignity, which forced him to fight against editors who chose a quiet time to save the USSR, the end of which was already read in hypocritical persons.

The fact that Maximov writes about the Soviet supply is both true and not. There was a shortage - but per capita consumption of meat and other natural products in the USSR was much higher than now. In schools, summer camps, institutes, workers and rural canteens, in the same Komsomolskaya Pravda cafeteria the food was cheap and of high quality. And in the village, where everyone kept their personal livestock, the tables of food were piled.

There were no dystrophics in the army sets; the unfitness for the health of the drill was the exception, and not the current figure reaching nearly half of the call. Any meat could be freely taken on the market - at a price one and a half to two times higher than the store. And they choked in the stores for cheapness not from hunger, but from the eternal obscenity noted by Pushkin in the now forbidden “Tale of Pope and his worker Balda”: “ . And now abroad at sales, where prices are falling at times - the crowding is no less.

As for censorship, this is utter nonsense, especially evident against the background of the present day. There was no such a full-fledged writer in the USSR who would not flourish with might and main and would not be read by all and sundry (well, with rare exceptions). And there is no film banned in the USSR that would later prove to be great.

With the current alleged absence of censorship of writers equal to Sholokhov, Bulgakov, Pasternak, Shukshin, Kazakov, Rasputin, Roshchin - did not become at all. Today, not censorship - but censorship. God forbid that the wrong person was hurt or not, and the writer takes off forever. He is not being bullied like Pasternak, the analysis of whose unsuccessful Doctor Zhivago novel was given a whole number of Literary Newspaper from October 25 from 1958 of the year - not an advertisement, but an advertisement! He is simply blocked by oxygen gradually - and he self-destructs.

However, for me, the main merit of the Soviet power remained not in the general saturation of the population and its good health - although this is a plus. But man does not live by bread alone - what a shame it is not to know the intellectual who works on the vocation with the "spiritual father of the country" Zhvanetsky. And this “not by bread alone” in Soviet society was immeasurably higher than in the present.

From childhood I felt some kind of secret pride of a Soviet person, which remained after deducting all household and production adversities. The Soviet people won the Civil War, having beaten off along the way the immense corps of intervention; beat Hitler, who had insecure the whole of Europe; raised the country of two devastations - and all this at the cost of countless sweat and blood. So, in the Soviet system there was something so terribly attractive, for which the people were ready to pay the most terrible price!

I think this could be associated with only one thing that we in the USSR have achieved unconditionally - with the abolition of private property. At the same time, even our socialist abandonment carried in itself something that all Western ownership did not carry. After all, the whole thing is, in the long run, not what we are in - but what we are naked. And now a naked man - a spectacle in every sense of disgusting, why he began to need a pile of clothes covering his naked shame.

In the USSR, the construction of a pumping station was a nationwide feat, all the newspapers sang about it, sometimes badly - but about this; on this, that is, on the labor process, titles, laureates and orders were earned. Yes, this pump has since been captured by villains, but it was essentially correct. And when a heap of wingless ants, without any pomp, fumbles about somewhere, on which a closed group of bloodsuckers later profit - this is already something disgusting and undermining everything human ...

And he was - this fabulous, centuries-old moment of liberation from the shackles of capital and wage labor, for which we were ready to die in wars and work hard, not sparing ourselves, on the construction sites of communism!

The selfless pravdolyub Alexander Blok, on the eve of the 17 revolution, wrote about the secret aspirations of the Russian people: "The land is one, the land of God, the land is the property of the whole people." And even if it is a neglected wasteland, but the main thing is not separate flowering areas ...

Bad Soviet ideologues for some reason confronted us with Christ - in the most precious way, fostered by previous history. But it was the Soviet people who were in direct harmony with his covenants - and not today's hypocrites and gluttons, heirs of Soviet careerists.

For man is so immortal and great, how great and immortal is that he is capable of loving. And in the Soviet country, this field for love was immense. A small researcher from Odessa came to me, after reading some of my notes, with a fatal plan of salvation and restructuring of our entire economy, and at the same time the world one - this was in his footnote. The high chiefs met such walkers with kicks (although not always), but they drove and drove, honoring their entire country - and not just their corner from the ottoman to the toilet. Or, as today, the space from the master's house to the servants' house.

Its own country, immense as a soul, was what was the secret of long Soviet perseverance and production successes that we did not take off now.

And why did we all think this through - there was not enough spirit to save the holy idea, when parasites saddled it. They believed in these clever Maximov language, singers of countless chickens and all sorts of bright packages - for which, yes, there was some kind of deficit, but not critical and not tragic ...

What today pulls them for dirtying the generous cradle to which they grew up? In nostalgia for the USSR, they sense a threat to the realm of the belly that they would like to consolidate in Russia forever ...

Maksimov, arguing in terms of edible and entertaining for a full belly, wonders where this craving for the USSR now comes from, where sometimes it was impossible to buy chicken without a queue. And this thrust comes from the eternal principle, from Christ, from Blok, from the great Soviet literature and the great Soviet cinema. The USSR was first of all spiritual, and the present system was not. And this current barren system for the gluttony of some who have eroded as a wardrobe, and the poverty of others lost the main thing - the soul.

And why not exist without a soul?

Ctrl Enter
Noticed oshЫbku Highlight text and press. Ctrl + Enter
We are
What you didn't want to know about EnglandHow can Russia survive and win in the 21st century?
Military Reviewin Yandex News
Military Reviewin Google News
484 comments
Information
Dear reader, to leave comments on the publication, you must sign in.