Slaughter something ... prettier (part of 6)

March 31 2016
17
And so it happens that you choose a topic at random, guided by the principle “like it - dislike it”. Then she begins to like others, and as a result she begins to live her own life, and it is not you who “lead” her, but she you! So it happened with a series of materials about knives and daggers - “to kill more beautiful ...” The readers of the BO liked it, and they started writing that it would be nice to continue it and even pointed out “fish places”. But not all of them turned out to be such, so it took time to find the materials that were equally interesting, in the author’s opinion.

And now before you another material on this subject, which this time is based on a collection of cold steel not the Metropolitan Museum in New York, but a collection of artifacts from the Princeton University Museum in the United States - a private research university, one of the oldest, most prestigious and the most famous universities in the country, which is located in the city of Princeton, in the state of New Jersey. There and historical faculty, and here for the services of its students there is a small but very interesting collection of knives.

We begin, as before, with daggers of stone. However, in past materials of such a wonderful flint dagger, we did not have. This one - and you see it in the next photo, just lovely. Found in Denmark, the end of the Neolithic era, ca. 8000 - 2000 BC. Length 26.9 cm., Thickness 1.9 cm., Width 6.4 cm. It seems to be all clear. But questions remain, and there are more than answers. The skill with which it was made, and most importantly - its small thickness, is amazing. But the most interesting thing is not even that. And the fact that almost exactly the same dagger is in the Stockholm State Historical Museum. True, it dates from 1600 year BC. It is believed that it mimics the form of early bronze daggers. But ... both seemed to come from the same workshop! That is, such workshops at that time already existed, and the production of flint weapons was "continuous"? So there were not so many people in the Stone Age and wild ...

Egypt has had a tremendous impact on the development of European civilization, although this is not always obvious. In any case, what is important is that he fed the whole Roman empire with wheat, and if it were not, it is not known how it would have developed and expanded. And it was precisely the daggers cast from copper and bronze that the ancient Egyptian warriors were armed with. 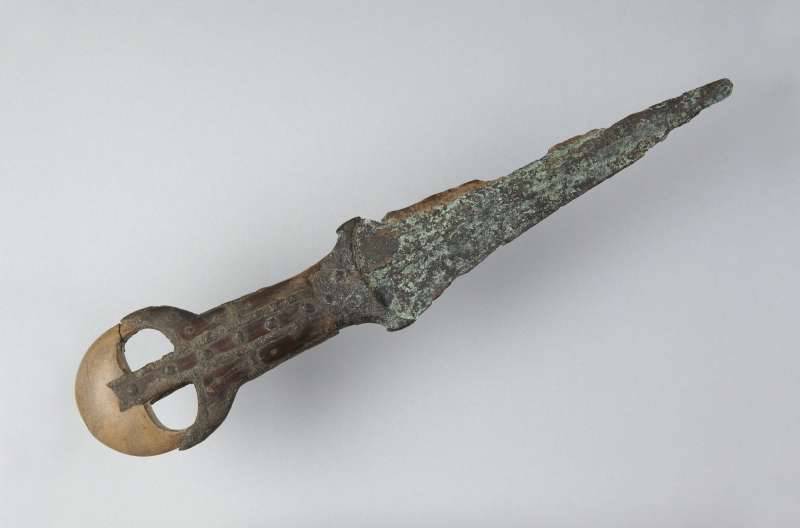 For example, what the copper dagger of the Middle Kingdom era of 2030 – 1640 looked like. BC. Length 28.9 cm., Width 5.8 cm., Thickness 2.2 cm. Very interesting design of the handle. On it figured pommel of alabaster, riveted to the very handle with side rivets. And it was necessary to think of it before! Princeton University Museum.

About Mycenaean daggers and rapier swords there have already been a lot told. I would just like to emphasize that if the flint daggers were faked for copper and bronze as one whole - the handle plus the blade, then the daggers of that era had a metal blade, but a wooden handle. This clearly indicates a metal deficiency. The blade was cast separately, forged and inserted into the kerf on the handle, after which it was fastened with rivets. On the blade, which is in the photo below, there are four holes for rivets. And there are blades with three and four, and five to seven rivets. In any case, such a connection could not be particularly strong. But what is interesting is that when later the handle was cast at the same time as the blade, and the fastener, and the master riveted these rivets, they were already playing hard on solid models. That is what people have at all times was the inertia of thinking. The technology is new, and the design is old - “so did the fathers!”

Bronze blade from the Cyclades, approx. 1500 - 1350 BC. Princeton University Museum.

In the collection of bronze daggers at Princeton University there are many Chinese daggers of the Shan dynasty. All of them are made of bronze, solid and all have an equally beautiful and completely uncomfortable handle. And the question is: why did they need such daggers and how did they hold them in their hands? In addition, they are all very thin. This is clearly not a military weapon, but then what was the point in it, or rather, what was the point of spending on "this" valuable metal? Dagger length 26.0 cm., Width 9.0 cm., Thickness 0.4 cm.

Dagger of the Shan dynasty from the Princeton University collection.

There are in the collection of the museum and the famous "Laurigansk bronze." Luristan is a region on the border of Iran and Iraq, in Central Zagros, where in 1100 –700. BC. there was a developed industry of cast bronze. The finds are characterized by a large number of anthropomorphic and zoomorphic figures in the decoration of weapons and horse harnesses, as well as religious objects. The emergence of this center is associated with the Caucasian tribes that migrated to this area and merged with the kassites who were engaged in the production of bronze as early as 2000 BC. It is believed that the newcomers were Indo-Europeans, and it is quite possible that both culturally and ethnically they became the ancestors of the later Persians and Medes. In any case, it is important that they cast excellent bronzes using the “lost shape” technique. Many reputable museums tend to have in their collections samples of "Lurian bronze." Well, in Princeton there is a very interesting dagger with “ears” on the handle.

However, the shape of the handle of this dagger is no more surprising than the shape of the blade at the knife from Congo 1905 of the year. Length 14.1 cm., Width 3.5 cm., Thickness 0.3 cm. The handle itself is wooden. Blade forged from steel. Princeton University Museum.

Well, now back again in Ancient Rome, where the most common dagger, which was owned by any 1 legionary. AD, was pugio - which had the appearance of several times reduced gladius, although not quite. Gladius usually had a rhombic blade shape, but the pugio had a flat blade with a vertical edge. The crosshair is weak, in the middle of the handle there was a thickening. The scabbard is tinned tin, bronze or iron sheet, and very often they were decorated with silver inlay. That is, the swords were decorated by the Romans easier daggers! The length of the blade ranged from 20 to 25 cm with a tip of a very characteristic shape.

The Princeton University Museum also has such a dagger, and in a very richly decorated sheath. Here, and bronze, and silver, and gold, and mobile, in a word, decorated it at least where. But what is interesting: these archaeologists find daggers, confidently dating them 1 c. AD, but by the end of it they disappeared from the weapons of the legionaries. In any case, there are no pugios on the figures from the column of Trajan! 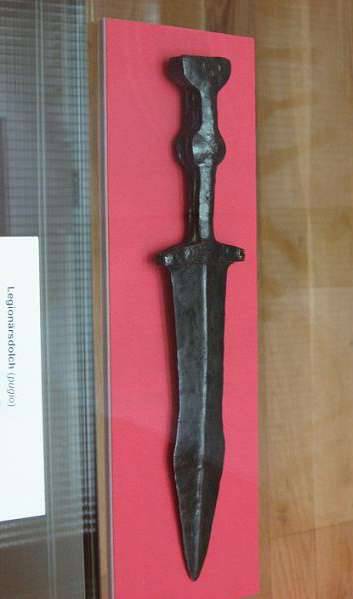 And here is the Roman Pugio from the Museum of the City of Hann in Lower Saxony. And the Roman legions got there in due time. 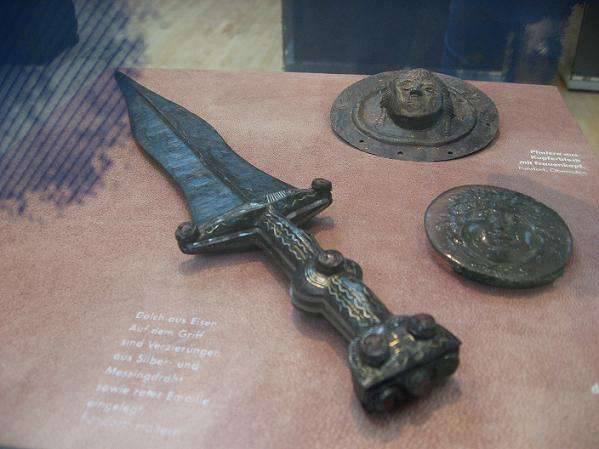 Pugio from the Haltern am See Museum in Germany. 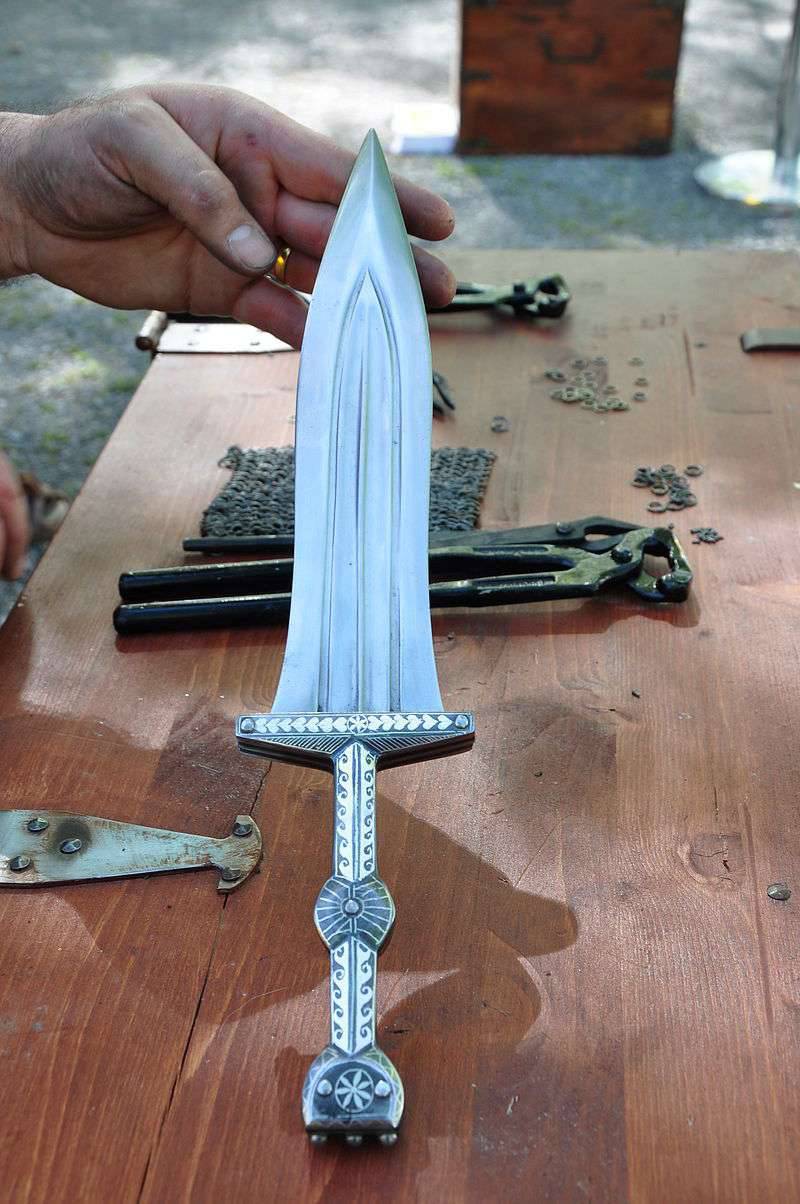 A modern version of this dagger, made in full accordance with the Roman tradition.

Let's go back to the Princeton University Museum Fund and look at this dagger made in France in 1840 year. Gilt bronze was used for its design. The length of the dagger 38.7 cm. in sheath, blade - 36.1, see, crosshair width, 9.5, see, blade, 3.9, cm. Such a dagger is so beautiful and spectacular that ... is worthy of the novel by Agatha Christie, where they are stabbed to some collector.

No less beautiful daggers were made in Toledo in the late XIX - early XX century. Steel made of silver and gold has gone to make it. Length 8.5 cm., Width 4.5 cm., Thickness 1.1 cm. Princeton University Museum.

There is also a Japanese dagger in the museum's collection. And ... very unusual. That is, its design is quite traditional. Another thing - the blade. That blade has nothing to do with it. Judging by the design of the handle, this kaiken - a dagger for a woman. But here a blade with half-double-edged sharpening of its blade is a thing for the Japanese completely unusual! Blade length 33.0 cm., Width 3.6 cm., Thickness 2.7 cm. Sheath: length 25.3 cm., Width 4.0 cm., Thickness 3.4 cm.

It would be interesting to read about it in more detail, however, apart from information about who exactly gave it to the museum, nothing more was found about it.