Fleet Admiral Kasatonov will receive the crew in November 2016

March 29 2016
44
The crew is moved to the Admiral frigate, which is being built at the Severnaya Verf shipyard (St. Petersburg) fleet Kasatonov "(project 22350) is scheduled for November this year, reports RIA News message of the representative of the plant Olga Danilevskaya. 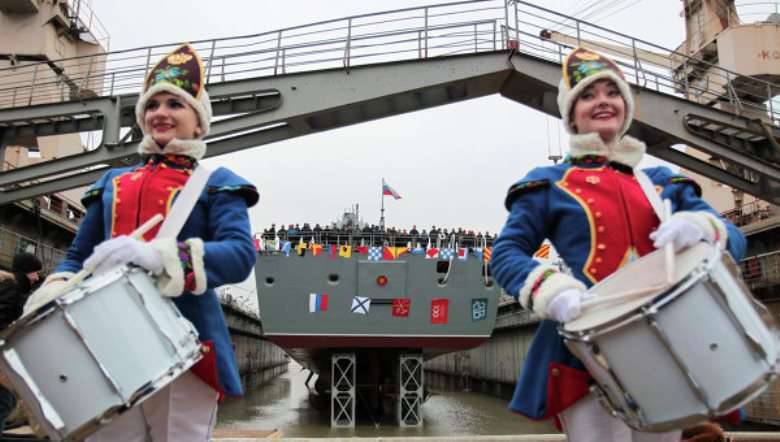 Launch of the frigate "Admiral of the fleet of Kasatons"

According to her, at the present time "completion work continues on the ship, the main strike complex, antennas and special equipment are being mounted."

In addition, work began on the "sewing and equipment of residential premises." “The crew’s arrival is planned for November 2016 of the year,” Danilevskaya said.

“The power plant systems and general ship systems with maintenance mechanisms have already been manufactured, installed and tested on the frigate, electrical work has been completed, power has been supplied to the main switchboard in the bow and stern power plants, the ship is being converted to standard lighting,” she said.

Experts also conducted a leak test of fuel systems. “The volume of the tanks equipped on the ship will make it possible to cover distances in 4,5 thousands of miles without refueling,” said Danilevskaya.

“The ship has been prepared to center the main engines afloat,” she added.

Help Agency: “Ships of the 22350 project have a displacement of 4,5 thousands of tons, 135 meters in length, 16 meters in width, travel speeds up to 29 knots, cruising range up to 4,5 thousands of miles, autonomy up to 30 days. Crew - 180-210 people. The armament A-192 "Armat" caliber 130 mm, launchers for 16 anti-ship Onyx or Caliber-NKE and the Polimen-Redut anti-aircraft missile system are in service.

Ctrl Enter
Noticed oshЫbku Highlight text and press. Ctrl + Enter
We are
The frigate of the 22350 project “Admiral Kasatonov” was launched"Admiral of the Fleet of the Soviet Union Gorshkov" of the 22350 project - transition from St. Petersburg to Kronstadt
Military Reviewin Yandex News
Military Reviewin Google News
44 comments
Information
Dear reader, to leave comments on the publication, you must sign in.