March 30 2016
286
This material is not about the Yeltsin Center specifically. He is not talking about whether it is worth or not at the official level to recognize the activities of Gorbachev and Yeltsin at the helm of a huge country as criminal today. There is even material about how people suddenly turned out to be in power, for whom a timely call to “friend George” or “Friend Bill” was many times more important than the interests of the people who turned slander, betrayed and thrown into the throat of a meat grinder, called the “transition to democracy”.


This material is about what a significant transformation occurred during this time with Russian society, that such topics are openly wanted and can be discussed by an increasing number of citizens, and even those who were considered completely loyal to the first persons of the era of “democratic changes” for some time.

Just a few days ago, I’m not afraid of this word, stunning in its emotional glow of Nikita Mikhalkov’s BesogonTV program. One of these programs is "On the imaginary and true conjuncture"another "Is there a way out of the historical labyrinth of the Yeltsin Center". In their programs, which can be seen on YouTube’s “BesogonTV” channel, Nikita Mikhalkov publishes information and its analysis, which is a real earthquake for all members of the ultra-liberal world, who have taken hold of what’s called 90’s since the beginning of democracy’s conquests ". The team of Mikhalkov cites such facts that strike a blow to the most painful place of the ultra-liberal stratum of Russia, who considered that she and she alone can give free interpretations not only to what is happening today, but also to what is connected with the thousand-year Russian history.

The “Bezogon” demonstrates the indignation of representatives of ultra-liberal “fauna” who have fallen into a stupor because of the programs of a person whom they have all been thinking about on the board for all these years, the truth suddenly appears both about themselves and those participation of whom this, excuse me, mold on the body of Russia appeared and fairly expanded. The ultra-liberals experienced a real shock when they heard the following statement from Mikhalkov:

I am sure that nothing can be built without clearing the site. And clearing the ground is at the state level recognizing the crimes of Gorbachev and Yeltsin. They committed a real crime. Voluntarily, involuntarily, guided by ambitions, not ambitions, this is not the point now. Their accomplishments led to the collapse of our country! And this is the greatest geopolitical catastrophe that happened during this century. 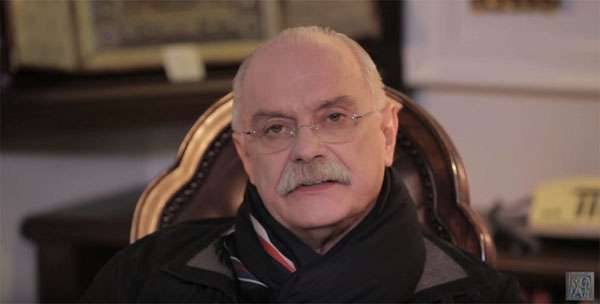 And it’s not even a matter of how justified or unjustified is the loud statement by the People’s Artist of the RSFSR, how much is the reaction to this statement from those who believed (and trying to assure others of this) that the collapse of a huge country, that pain and suffering its peoples as a result of this collapse is the main democratic victory of the country in the twentieth century.

And if Mikhalkov had said only what was presented in the form of a quotation above - the ultra-liberals could have considered that Nikita Sergeevich simply overturned and confused the terms. But Mikhalkov a) confirmed his point of view in one of his programs on “Bezogon” and b) presented another program, in principle, on the same topical topic - on how from the collapse epoch of a huge country and the grief of its citizens tried to blind something much more monumental than the Lenin mausoleum (talking about the Yeltsin center in Yekaterinburg).

If any of our readers did not have time to get acquainted with the material of Nikita Mikhalkov on "BesogonTV", it is worth presenting this material here - as the main subject of discussion of this article in “Military Review” (I hope Nikita Sergeevich will not make claims for allowing himself to discuss his materials).

Nikita! - cried adherents belolentochnyh ideals. Is it you, Nikita ?! - barely moving away from the shock and with volleys squeezed this shock with expensive cognac, they continued. They shouted and dozapivyvalis to the point that, for example, Mr. Svanidze, apparently, really, stayed until now in firm confidence about the liberal handshake of Mikhalkov, declared the director "conjuncturer", and his statements and materials "Zhirinovshchina." They say it was “almost ours”, voted for EBN, spoke about its strengths. And here - the Kremlin took you, Nikita, into a turn ... Or you yourself, Nikita, decided to curry favor with the Kremlin. And the term “Zhirinovshchina” Nikolai Karlovich apparently decided to weave in red (not in the sense, of course, communist ...) literally because exactly some time ago the permanent leader of the Liberal Democratic Party declared the need to recognize the Gorbachev and Yeltsin regimes as criminal.

Well, the ultraliberal party-goers simply cannot understand that in those years, while they felt themselves masters in a huge country, both the structure of society and the ability of society to adequately (and not through the glasses given by Big Joe) perceive reality has changed. Mikhalkov himself says that he did not become an opportunist, and it was not millions of people who became opportunists, but everything was much simpler and more important - the situation itself changed. The country simply does not want to be the one that supporters of the plantation of Western idolatry constantly wiped on their feet. The people have already cheated on the transatlantic chewing gum and sipped their coca-cola "freedom" to allow themselves to remain the same mass slandered at the end of 80-beginning of 90-s, confident that 90-e are the donors of freedom ...

And now, when the belolentochnaya team tried to marvel at the same Yeltsin center, which in terms of the personality cult even surpasses everything that took place in the Soviet years (except for comparable in scope to the pyramids of the Egyptian pharaohs), it receives a blow to the temech. A group of people squealing about the personality cult of Stalin applauds the world, which is the personification of the true personality cult. He applauds, but, receiving a portion of truth and criticism, he suddenly tries to make offended people. Representatives of the supreme power do not seem to applaud, but they are laying flowers.

You offended ultra-liberals ... They are offended because they slanted a rotten cartoon about the “type” of our history, where Russia is a black, stinking stain that saved us from the shackles, You see, only Boris Nikolayevich Yeltsin. Offended by the fact that they showed how Chubais gives an interview aboard an airplane and explains the essence of barbaric privatization by the need to “kill communism” - to kill, by selling all state property, even for pennies, even for the latest rogues who called themselves biznesmen ... Offended by the fact that Mikhalkov , whose work can be treated as you please (the personal matter of each), demonstrates Gorbachev’s amorphousness and Yeltsin’s servility, who reported about the collapse of the USSR, first of all to the American president, who pretended that he was not aware of all yty ... Offended ... they bucked ...

In general, the material of Nikita Mikhalkov is not just material. This is a marker that perfectly identifies all those who continue to believe that the country and the people remained the same as 25 years ago - ready to listen to nonsense about building democracy (by putting people off), ready to pick out only the worst and most rotten from the country’s history. desire - and give out for the rotten that which never was. It is to these people (Mikhalkov says about them) that it is important for all of us to be concerned about how to properly charge water and cream from the next Kashpirovsky through the TV screen, rather than why and how our army and navy were killed; by how to ride the square and shit on everything and everyone around instead of working and respecting the interests of others, not forgetting, first of all, about their own dignity.

In conclusion, I will allow myself to say this: Nikita Sergeevich, honestly, I can’t identify myself as ardent admirers of your work (as a director of most films) of recent times (it just so happened, I can’t do anything with myself), but for BesogonTV "And for the topics that are raised by your team in this program, thanks! It is for the truth - thanks!

Ctrl Enter
Noticed oshЫbku Highlight text and press. Ctrl + Enter
We are
Results of the week. “The wind of change must not whistle in the ears”
Military Reviewin Yandex News
Military Reviewin Google News
286 comments
Information
Dear reader, to leave comments on the publication, you must sign in.