March 30 2016
53
In Europe, dozens of cells of bearded terrorists are free, ready to make new attacks. Hundreds of jihadists are waiting in the wings. The intelligence obtained in Brussels testifies: over several years, IS has created in Europe a complex terrorist network with a multitude of cells. Belgian militants were only part of a larger jihadist organization. According to other information, the “fertile soil” on which Islamist extremists are cultivated is Belgian prisons. There, petty young criminals are handled by "preachers" and then turned into carriers of black evil. 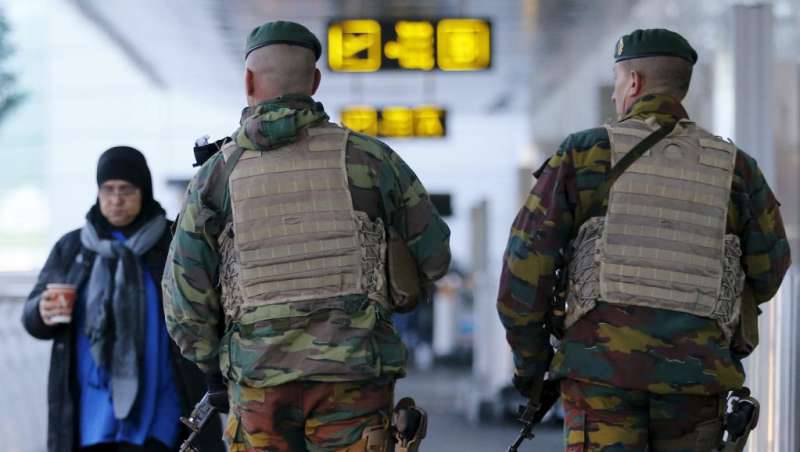 The pan-European efforts to neutralize the Islamic State militants behind the terrorist attacks in Paris and Brussels led the investigators to the sad fact: there is a whole network of terrorist cells in Europe. Their territorial coverage by the authorities has not yet been assessed. Writes about this team of authors in "The Wall Street Journal".

The central figure, which the investigators paid close attention to, is Faisal Chef. This man of Moroccan origin is "registered" in Brussels. It was he who was detained at the building of the federal prosecutor's office of Belgium last week. He has already been charged. Police believe that it was Chef who drove the trolley and got on the video recorder at the Brussels airport. Frames were taken just a few minutes before the suicide bombers put in action.

The boss is a social networking activist, a pseudo-journalist, he is 31 for a year, and the officials and the police were very surprised when he got hooked. The fact is that this man "never before joined the radical circles."

Another suspect arrested in Italy. This man is suspected of supplying false passports to alleged militants. The “Italian” is called Jamaladdin Ouali, who is Algerian by origin. The data on this of Uali and his connections with the thugs appeared last year, during a search by the Belgian police of an apartment in the district of Saint-Gilles. Police found nearly a thousand digital photos and a mountain of fake documents with fake names.

Three other detainees (one taken near Paris, two in Brussels) are supposed to be "connected" with the terrorists. There is evidence that they were planning a new (failed) attack in France.

Journalists believe that a number of arrests in different countries, as well as the numerous detentions of suspects, suggest sad thoughts about the spread of the terrorist network far beyond Paris and Brussels.

One senior official from the United States, whose name was not named, said that a number of arrests showed that the terrorist network had become quite extensive. Other officials confirm the information about the scale of the network, which almost all of Europe has enveloped with its cells.

In the article "Intelligence agencies fight to unravel Isis network in Europe", published in "The Financial Times", journalist Sam Jones, writing on the topics of defense and national security, suggested that in Europe hundreds of jihadists belonging to dozens of terrorist cells can “walk about”.

The intelligence obtained in Brussels testifies: in Europe there is an extensive network of terror. IG created it for several years. There is a dynamic and multifaceted threat, law enforcement officials say. The police are active, but the militants of the ISIS cleverly elude persecution.

In January last year in Verviers, reminds former French intelligence chief Bernard Scarsini, the Belgian police covered one such cell. Special Forces prevented a major planned terrorist attack. However, not all bearded men were arrested; it turned out that some members of the network had disappeared. Later, they managed to “cause damage,” said Scarsini, referring to the November terrorist attacks in Paris.

The expert believes that the network igilovtsev receives orders from its top in Syria. There is a "headquarters" planning attacks all over the world. It is possible that several groups are concentrated in the headquarters at the same time, planning operations in Europe. It is also possible that these groups act independently of each other.

The authorities of the countries of Europe are also worried about local citizens returning from Syrian “business trips”. The article refers to the number of such “returnees” - over 1200.

In addition, the militants of "IG" are consolidated with the old networks of "Shariats" in Europe (for example, with Sharia4Belgium).

The networks function without direct contacts: the one who manufactures “bombs” does not even know those who take them away from the agreed place, but they do not know him.

The journalist summarizes: now that “IG” is retreating in Syria, bearded men will rely on the “campaign” in the European Union.

37-year-old Medo, a bank robber and raider, served a prison sentence in Belgian prisons 10 for years. He visited various prisons and studied the local system well.

In his opinion, the prisons of Belgium are “fertile soil” for the cruel Muslim militants. And, interestingly, many of the participants in the bombings in Paris and Brussels were just serving a short time for some minor crimes in Belgian prisons. There they were processed by recruiters and preachers. These guys then went free, having a new meaning of life - "deadly."

The "preachers" used for agitation the time that was given to physical exercise in prisons. Also, campaigning was carried out through the windows in the cells. As it is correct, the prisoners (future militants) received Korans as a gift, they were also given to use mobile phones and provided some other minor services, thereby impressing the young people. At the same time, young people were inspired by ideas about the “unjust deeds” of the West — the invasion of Iraq, the troubles of the Palestinians, the sufferings of Arab immigrants in Europe, and so on. Conversations were conducted in Arabic, their protection was simply ignored.

As an example, Medo spoke about the soccer player recruited by Nizar Trabelsi (he sat with him). This athlete at one time began to share the ideas of al-Qaeda. In 2003, he confessed that he was trying to get on a car with explosives to the Belgian NATO airbase (I thought that nuclear missiles were stored there). This Trabelsi served 10 for years in Belgium, and then he was extradited to the USA.

It seems that Europe has no idea what to do with a gigantic network of terrorists that has spread so widely that even special services cannot determine its borders. Apparently, they will not determine it, because the network is a flexible and very mobile structure, and its members often do not know each other either by face or by name, and also operate under false names and travel around using false documents.

They are afraid of the authorities of the European Union and those bearded citizens that after the Russian air strikes and the attack of the Assad army are returning en masse to the European “homeland”. There is no doubt that they will join the ranks of local terrorist groups. They will “revenge” Europe for the sufferings of the Arabs, for the collapse of Iraq, for their defeats in Syria, and also for what they consider to be the “oppression” of immigrants in the EU states. "Preachers" will continue to agitate, and young people who have gone astray, who do not have a strong core of life, will turn into a terrible "faith." The problem of the crisis in the Middle East and in the countries of northern Africa, in which the West is guilty, is now beating the West. For what gentlemen democratizers fought for, and ran into it.