And the voice of a woman should be heard everywhere ... 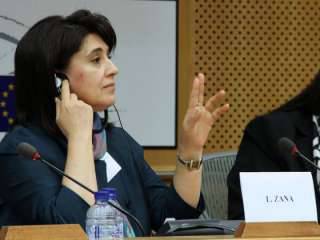 In the Kurdish environment, Middle Eastern women are developing on a par with a man.


“Who comes to mind,” wrote academician I. A. Orbeli, “that Saladin, who caused so much grief to the crusaders, is a Kurd, that the glorious stories Of Armenia and Georgia, not only glorious as commanders, but also as builders of culture, the princes Dolgoruky are Kurds in origin, the Kurds were also competing with Georgia in the struggle for the formation of statehood in the Caucasus and ruled Sheddadids in Iran, who wrote half the Kurdish Persian great poet Nizami. All the great people listed above were spawned by a Kurdish woman. And I would like to talk about them, militant, purposeful and at the same time gentle. About the most famous Kurdish women. I must say that the national leader of the Kurdish people - Abdullah Ocalan - has repeatedly advocated for the observance of women's rights, for the development of personal qualities in a woman: “A woman should be seen everywhere, and a woman’s voice should be heard everywhere. If not for the millennial struggle of women for their emancipation, our mothers, wives, daughters and sisters would still be slaves. ”

The first heroine of the article is one of the most iconic figures of Kurdish politics, a woman whom I admire is the great Leyla Zana, a famous politician and human rights activist from Turkey. Leila is also known for speaking twice in the Turkish parliament in her native Kurdish language (in the 1991 year and in the 2015 year), which is prohibited by Turkish law. “I take this oath for the sake of fraternity between the Turkish and Kurdish peoples” - it was this phrase calling for peace and fraternity that was fatal for Leila.

Already at that moment, the parliamentarians broke out shouting: “What does this mean? Who dares to speak another language in the Turkish parliament? Separatist! Terrorist! Arrest her! ” 15 years of imprisonment on charges of treason and an attempt to divide the people received Leila for her speech. This sparked international protests. Zanu was supported by the human rights organization Amnesty International and the European Court of Human Rights, which protested against the verdict. Leila Zana received the Sakharov Prize from the European Parliament. The Andrei Sakharov Prize for Freedom of Thought is awarded for achievements in the field of human rights protection. After pressure from the EU, Leila was released from prison in the 2004 year, after 10 years in prison.

In 2015, Leyla Zana was again enraged by the Turkish nationalists in the Grand National Assembly in Ankara when she swore the second oath of oath containing a phrase in Kurdish. In connection with this act, Tayyip Erdogan refused to meet her because her oath was not accepted. Currently, Leila continues her political activities in the interests of the Kurdish ethnic group.

Parents gave Bhutto a European education, raised their daughter not at all in the way that is common in Islamic countries, predicted a career in parliament for their daughter, and from 1977, Benazir became an assistant to his father.

Bhutto's successes are very significant:
- she was able to improve relations with the country's long-time rival, India,
- nationalized oil fields
- launched financial flows for social programs
- introduced free healthcare and education
- as a result of the reforms undertaken by her, illiteracy among the population of the country decreased by one third,
- electricity and drinking water were supplied to poor villages and villages.
As quickly as she entered the political environment of Pakistan, so quickly she left, both from politics and from life. After returning from an 10-year exile, in 2007, the second and already fatal assassination attempt was made on Bhutto.

Benazir Bhutto entered the Guinness Book of Records as the most popular international politician 1996 of the year, she was awarded an honorary doctoral degree from Oxford University, the French Order of the Legion of Honor and many other awards.

Vian Dahil, social activist, member of the Iraqi parliament, dedicated to the fight for the rights of ethnic minorities.

A woman who became famous after the August events of 2014, when ISIS (a terrorist organization banned in Russia - editor's note) opened a real hunt for ethnic and religious minorities in Iraq. Thousands of people were killed during religious cleansing, more than 4 thousands of Kurdish Yezidi religious minorities were captured by the “Islamic State. Dahil made an emotional speech urging to pay attention to the situation in which the representatives of the Kurdish religious minority Yezidi found themselves and to save them from genocide. She is the only one who managed to draw the attention of the West to the problem of the Yezidis, and the attention of the IG to her own person. Militants of the IG carry out a systematic hunt for women politicians and activists, and Vian is perhaps the number one target. In 2014, Vian Dahil became the laureate of the Anna Politkovskaya Award for her work in protecting the Kurdish religious minority of Yezidis and Iraqi women. Vian Dahil:

Vian Dahil: “I work 24 an hour a day, not because I'm a member of parliament. I do this because I am Vian. ​​" Vian is awarded the 2016 International Women's Rights Protection Award.

Another representative of the Kurdish religious Yezidi minority - which is not impossible to say - Nadia Murad. This is not a careerist, not a politician, not a girl who has achieved high results in professional activities. Nadia - Kurdish, which you can safely reward the Nobel Peace Prize.

Nadia Murad is a 21-year-old girl who grew up in a strict Kurdish Yezidi religious society that has experienced the slavery of Islamist Islamic State. 16 December 2015 Nadia Murad Basi Taha spoke at a meeting of the UN Security Council in New York. She had the courage to tell in detail about all the horrors of life with terrorists and urge the world community to save women and girls from violence. She was in slavery at the militants of the "Islamic State" for three months, soon she ran away. Nadia Murad can also be called a symbol of Kurdish generosity: despite the fact that she lost her entire family and relatives, despite the violence of the Islamists, for all the horrors of a young girl’s 3 months, a grain of hatred towards Islam and the Arab world did not originate like this usually occurs after imprisonment and suffering in slavery. Moreover, Nadia Murad became the official representative of women and girls affected by IG.

After the speech, the members of the UN Security Council made a unanimous decision to transfer the case of the Yezidi genocide to an international criminal court.

Another symbol of the generosity of the Kurdish identity is Gulan Avgin.

This is a deputy of Kurdish origin, a member of the Swedish "People's Party".

11 March 2010 was a resolution by the Swedish Parliament during a dramatic 5 watch process of debate and voting with a minimum margin of one vote, recognizing the Armenian Genocide in the Ottoman Empire. The decisive vote in this historic vote was the voice of a Kurdish woman, Gulan Avjin, who voted in favor of the position of party members. Another fact of Kurdish generosity: risking his political career and speaking out against the program of his party, Gulan played a crucial role in recognizing the Armenian Genocide. Unlike our "friendly neighbors." When the issue of recognition of the Yezidi genocide regarding the tragedy in Sinjar was raised in the Armenian National Commission established in the Armenian parliament, Armenia refused, explaining that the bill was not politically beneficial for the republic. Although, let's say, the same European Parliament adopted the resolution, including Christian groups, Assyrians and Yezidis.

Moreover, Armenia played its dominant role in igniting religious hatred in the Kurdish environment, not recognizing the Yezidis as a religious minority in the Kurdish ethnic group, but on the contrary, separating part from the whole. In Kurdistan, according to the quota, an Armenian deputy works for 2 thousands of living Armenians, and in Armenia there are NO Kurdish deputies for 40 thousand Kurds. Who are the judges? Judges are readers. Draw your own conclusions.

Speaking of Kursk women, I can not fail to mention women - peshmerga. After the Israeli army IDF, Kurdish troops - the only with so many women in the composition. It should be said separately about the Kurdish woman as an object in the context of the women's issue in the Middle East. The Kurdish woman is one of the few women in the East, ideally combining both femininity, tenderness and maternal qualities, and heroism along with the ability to keep weapon. A Kurdish woman (even from the most conservative environment) never covers her face, democracy always reigns in Kurdish society. A Kurdish woman in the Middle East is almost a revolution, there has never been such a thing before, and in many places it still does not exist. In one of his books, Abdullah Ocalan wrote: “If we want to build a new society, then we should help women develop. If a woman is enslaved, then so is a man. ” The words of the national leader, spoken in 2008 year, today, already after 8 years, have realized themselves in the struggle of Kurds against the Islamic State.

And I must say, quite successful and productive struggle!

Syrian Kurdistan has been notable for the particular activity of Kurds in the political and social life of the country, and it is especially obvious in the war in Syria. In the Syrian army (detachments of the people's self-defense, Kurd. Yekîneyên Parastina Gel, YPG) 40% of women are fighting, about 15000 Kurds. Syrian Kurdistan (in Kurdish Rojava) is a well-organized, mutually coordinated self-government of the three cantons (Afrin, Jazira, Kobani), in which women's cooperatives and women's academies are established. In the de facto autonomy, the principle of co-presidency is encouraged, when a position is divided between a man and a woman. Kurdish Rozhava is an ideal model of civilian existence without state resources. And the Kurdish women played a significant role in this.

Thus, Kurdish women are the face of the Kurdish nation. Stereotypical thinking circles mistakenly think that a woman in the Middle East is enslaved. I sincerely hope that these individuals will be sufficient evidence that, at least in a Kurdish environment, a Middle Eastern woman develops on a par with a man.