March 29 2016
16
March 29 in Russia celebrate their professional holiday of the military service of the Armed Forces. The holiday of military lawyers officially appeared on the basis of a presidential decree number 549 of 31 in May 2006 of the year “On the establishment of professional holidays and memorable days in the Armed Forces of the Russian Federation”. The document says that the holiday in Russia is being established in order to revive and develop domestic military traditions, increase the prestige of military service and in recognition of the merits of military specialists in solving the tasks of ensuring the defense and security of the state.

Military lawyers provide qualified assistance to servicemen serving in conscription. Today, each military unit on the information board is a list of contacts, among which there are contacts, for example, the military prosecutor's office, which will help the soldier to report violations of military discipline in military unit, if any.

On the eve of the professional holiday of military lawyers, the Chief Military Prosecutor of the Russian Federation Sergey Fridinsky summed up the results of the activities of the Main Military Prosecutor's Office over the past year and outlined goals and objectives for the next stage of activity. According to Sergey Fridinsky, the officers of the main military prosecutor's office in 2015 conducted a truly titanic work, eliminating over 350 thousands of violations of the law in the RF Armed Forces. At the same time, about 12 of thousands of illegal legal acts were abolished, with the simultaneous restoration of the rights of more than 850 of thousands of citizens who are now connected or were previously connected with the Armed Forces of the country.

The activities of the employees of the main military prosecutor's office of the Russian Federation allowed the return of more than 9 billion rubles to the state budget. In addition, GVP prevented the loss of the Treasury of the Ministry of Defense by 1 billion rubles. 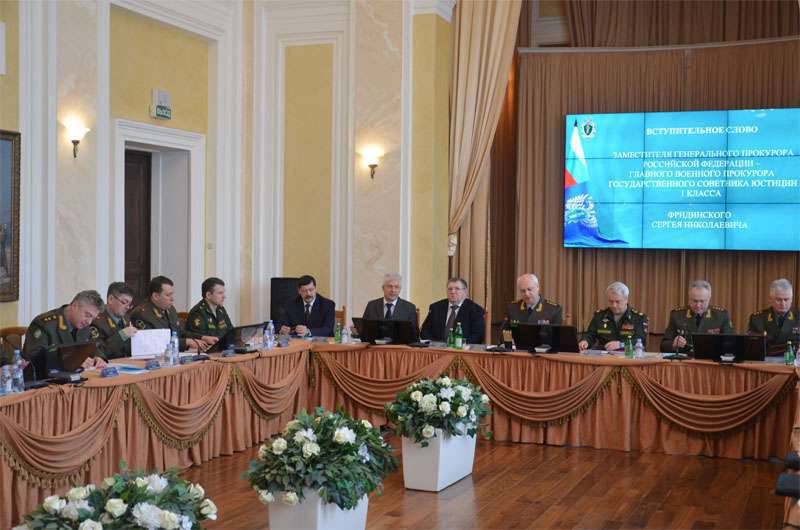 Sergey Fridinsky noted that in 2015, the number of crimes and offenses committed both by conscripts and contract servicemen decreased. A significant reduction was also noted in the sad segment of the violent acts committed by military personnel in military collectives.

As one of the most important tasks of military lawyers, the task is also set to reduce the level of economic crime in the RF Armed Forces. The Chief Military Prosecutor of the Russian Federation notes that an important area of ​​work remains control over the implementation of the state defense order with simultaneous control of the expenditure of budget funds allocated for the implementation of the state defense order.

Sergey Fridinsky during his speech:
The task is to ensure proper supervisory support, including when using the latest technology and the implementation of specific combat formations and military units. (...) Deficiencies in the production activities of enterprises and the lack of proper control led to the growth of overdue receivables by hundreds of billions of rubles. This should be dealt with. To do this, it is necessary to establish a coordinated work with territorial colleagues.

The work on the elimination (prevention) of corruption in the Armed Forces of the country is also noted. Today, according to specialists of the legal service of the Armed Forces of the Russian Federation, the share of corruption crimes in the troops is very high - about 20% of the total composition. At the same time, attention is drawn to the fact that the statistics of corruption crimes and all sorts of fraudulent schemes increasingly include outsourcing agencies involved in the supply of military personnel. In a number of cases, it turns out that outsourcing companies are registered by affiliated persons, which leads either to misuse of funds allocated by the RF Ministry of Defense, or to outright theft. In recent years, budget losses from the activities of “grocery” outsourcing companies averaged about 1 billion rubles (annually). There is an overestimate of the cost of products and (or) the cost of delivery of these products to the military unit. Often, the work of outsourcing companies (for example, on cooking) is replaced by the work of draftees, which is performed, for obvious reasons, free of charge - the allocated funds go into the pocket of commanders who are more concerned about thirst for profit than the prestige of a military formation and the honor of their uniform. Such officers are not in the commander’s office, but in the dock.

From the statement of the Chief Military Prosecutor of Russia Sergey Fridinsky:
A truly effective combat capability of the troops and each individual soldier alone is impossible without adequate logistical support.

The team of the "Military Review" congratulates the specialists of the legal department who stand on the defense of the rule of law in the Armed Forces of the country on their professional holiday!

Ctrl Enter
Noticed oshЫbku Highlight text and press. Ctrl + Enter
We are
Day of the legal service specialist in the Armed ForcesAutomatic guns for armored combat vehicles. Point of view of a Western specialist
Military Reviewin Yandex News
Military Reviewin Google News
16 comments
Information
Dear reader, to leave comments on the publication, you must sign in.