What thunders the Ukrainian army in the exercises "Spring Thunder - 2016"?

March 29 2016
83
The press service of the General Staff of the Armed Forces of Ukraine on the eve spread the message that command and staff exercises were launched under the common name "Spring Thunder - 2016". The exercises were announced under the following “slogan”: “the next stage of preparation of the Ukrainian units and formations for the enemy’s possible invasion” and “adequate response to external threats”.


Again, we are dealing with a typical Maidan logic. According to this "logic", the Ukrainian army is only preparing for the "invasion of the enemy", given the fact that, according to numerous statements by representatives of the command of this same army, "the enemy invasion has already taken place." If the “invasion has already taken place”, then what, I'm sorry, why the hell did they prepare for it? If there is no “invasion”, but it is only expected, then this is another fact that the statements of the Ukrainian “river men (speakers) of the ATO” are worthless. A fact of hundreds ...

Apparently, in Ukraine itself, such "logical" fortifications of command no longer raise questions. It is said - “they are preparing for an invasion in the presence of an invasion,” which means that it is so ... 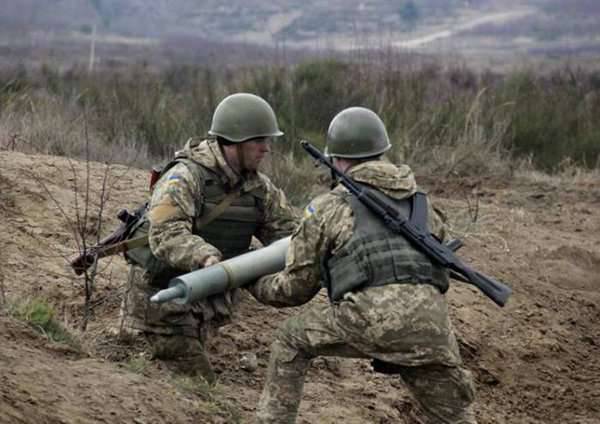 If you try to delve into the Maidan logic of the Ukrainian Ministry of Defense (which, as you understand, is unsafe for mental health), you can find out the interesting nuances of the exercises held in the territory of the fallow. The fact is that “preparation for the invasion” is only a bright (almost “Roshenovka” wrapper), and under the wrapper is an attempt to demonstrate to NATO curators, who are present during Ukrainian maneuvers in abundance, that the Ukrainian armed forces are moving to the North Atlantic military standards. Artillery mounts, armored vehicles, unmanned aerial vehicles are involved in military exercises.

From the statement of the official representative press service Ministry of Defense of Ukraine:
An important feature of military exercises is the holding of all activities in the new organizational and staff structures adapted to NATO standards, to which the country's armed forces are moving during the reform.

Special attention during the exercise, as stated in the press service, will be paid to issues of territorial defense and the movement of troops.

It is worth recalling that, earlier, after numerous attempts to understand the reasons for the defeat of the army near Ilovaisk and Debaltseve, the Ukrainian command came to the conclusion that the main reason lies in the low mobility of the units. If you translate from the language of the General Staff of the Armed Forces of Ukraine to a human, then the Ukrainian army could resist if reinforcements arrived in time. But reinforcements did not come up somewhere due to the late receipt of the order (orders slowed down somewhere in Kiev’s saunas, filmed by the generals ...), somewhere due to frank attempts to ignore orders. After all, in the Ukrainian media, boilers were proudly called “bridgeheads,” but the Ukrainian military saw with their own eyes that it was only to add new “meat” to the boilers to keep up with such “beachheads”.

Now, the overseas curators, apparently, decided to train the Ukrainian military on how to quickly and effectively transfer individual units to the areas from which the most tangible threat is coming. In general, “Spring Thunder - 2016” can be called exercises with the basic idea “What should I do to avoid getting bogged down like at Ilovaisk and Debaltseve?” The idea for the Ukrainian army, of course, matured, if not overripe, but one thing to go “to NATO standards ”in press releases of the Defense Ministry, and it’s one thing to get instructions from American instructors, and it’s quite another to put all this into practice.

In practice, for the time being, the Ukrainian troops are all the same: а) fitting to the contact line of military equipment in violation of the Minsk agreements, which had already ordered a long life (on Avdeevka the day before, Kiev transferred several more tanks), b) shelling from various types of weapons on the territory of the DPR (the most intense shelling in the Yasinovataya area) with obvious provocation of the army of the People’s Republic on active actions. In principle, there is no tactic, no strategy is visible either - stupid watering with mines and shells of various calibers and Maidan Facebook on Facebook. - It's all...

It is clear that looking at such things, even overseas curators in the lexicon end literary and non-literary words. That is why overseas curators make another attempt to teach the Ukrainian army coherence (not from the word “screw it up”). The next format is “Spring Thunder-2016”, as a result of which the Pentagon apparently hopes to get those military formations that will be really ready to adhere to precise tactical schemes, allowing not just to spend ammunition and not just catching the “lead” response.

And after all, the persistence of the American "friends of Ukraine" can be envied ... In many ways, this persistence in trying to train the Ukrainian army in military affairs is reminiscent of attempts to do the same with the Georgian army in 2007-2008. And, if truth be told, then both South Ossetia and now DNR and LC are lucky that Pentagon students in shoulder straps with big stars are much more concerned about personal enrichment with funds allocated for training rather than full-fledged training while working out tactical schemes by personnel.

Apparently, in order to demonstrate to overseas curators that “the process has begun,” the president of Ukraine, being in the “ATO zone”, announced the appointment of a new commander of the Land Forces of Ukraine. They became Lieutenant-General Sergey Popko. Of particular note are the words of the president of the fallow region addressed to the general. 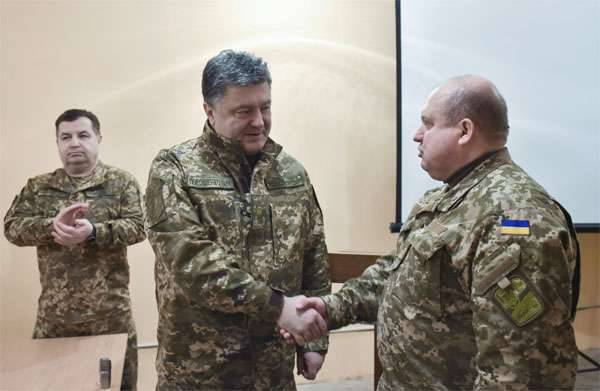 From the statement Poroshenko:
Please remember that it is you who have threefold responsibility for the fate of the country, for the effective use of subordinate troops to defend the Motherland, for the life of every soldier, every citizen of our state.

Why does this responsibility lie “exactly” on Popko, and not on the supreme commander-in-chief of the Armed Forces of Ukraine, Mr. Poroshenko? - Mr. Poroshenko did not explain to Lieutenant-General Popko, nor to the leadership of the Control Center "in the ATO zone", to whom the general was ...

In general, judging by the Ukrainian doctrines that started against the change in leading military circles, it can be stated that there is no question of any (even hypothetical) peace process in the Donbass from Kiev. Kiev has a desire to curry favor with NATO, to show that Ukraine deserves to be another member of this military bloc. What acts can be entrusted to such a member? - while NATO's "partners" of Ukraine are scratching their heads, calling on the Ukrainian army to rattle something at least on the "Spring thunder - 2016" ...

Ctrl Enter
Noticed oshЫbku Highlight text and press. Ctrl + Enter
We are
The action “Military service under the contract is your choice!” In Rostov-on-Don: future contract servicemen, exhibitions and “Russian Knights”Reports from the militia of New Russia for 27-28 September 2014 of the year
Military Reviewin Yandex News
Military Reviewin Google News
83 comments
Information
Dear reader, to leave comments on the publication, you must sign in.