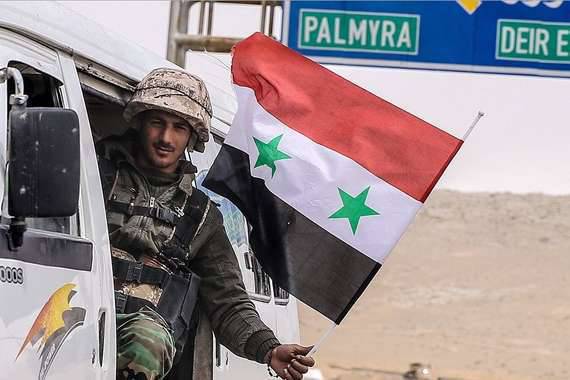 27 March 2016, the Syrian armed forces won the loudest victory since the Air Space Forces (VKS) of Russia began to support them - Palmyra was finally liberated. The storm of the city was preceded by several months of preparations - hundreds of air and artillery strikes were launched against the positions of the so-called Islamic State (IG, a terrorist organization banned in the Russian Federation) on the approaches and in Palmyra itself, with heavy fighting won back the heights. After all these “preparatory work” had been completed, the assault on the city itself lasted only a few days, since the militants had already been deprived of almost all supply lines, their military equipment was destroyed, and advantageous defensive lines were lost.

The capture of Palmyra is a victory on two fronts at once - both real, military, and informational. Let's figure out why.

Let's start with the information front. For many months, almost from the day Palmyra was captured by IS militants (in May 2015), all world media, including the Western ones, have fully covered the atrocities of the invaders. Probably everyone who has watched at least a little bit about the destruction of people and the ancient Roman heritage of the city the news. Since too much has been said, this time no one has decided to blame Russia and the Syrian government forces for anything, on the contrary, Western politicians, perhaps reluctantly, have appreciated Russia's contribution to the liberation of Palmyra. In the eyes of the world community, Russia is becoming the only player who does what he says: they said before the start of the VKS operation that they were going to seek negotiations between the parties and destroy the terrorists, and they are working in this direction.

As for the military component, the liberation of Palmyra gives government troops access to the M20 highway, which runs through the desert to the city of Deir ez-Zor. Parts of the Syrian army have been defending this city from IS fighters, having been completely surrounded for several years. Their supply is carried out exclusively with the help of aviation, including Russian. In order to reach Deir ez-Zor, the Syrian army will need to establish control over a highway with a length of about 180 kilometers. On the one hand, this is a very long distance for the Syrian conflict (heavy battles are fought for every piece of land), but on the other hand, most of the road passes through the desert, and there are only 5 very small settlements on the way, where militants can organize serious defense ( up to this point, the main battles took place precisely for settlements, which can explain the not so large area of ​​territories freed from militants). In the open space, they will become a convenient target for Russian and Syrian combat aircraft. In any case, in order to resist the advancing forces of the ISIS, it will be necessary to pull back part of the troops from the encircled Syrian city, which will make the life of the defenders a little easier. The removal of the environment from Deir ez-Zora could be the beginning of the end for the Islamic State in Syria: from there another road opens to the so-called capital of the Islamic Republic - Rakka. Of course, such a path may require more than one month of hostilities, but the prospects for defeating the IS nevertheless begin to appear gradually.