From the Caspian Sea to the Persian Gulf?

March 29 2016
160
Iran is trying to "reanimate" the old project: the construction of a shipping canal almost 700 km long, which will connect the Caspian Sea to the Persian Gulf. To launch the project, approximately 10 billion are required. The project will pay off within five years of operation (according to other data, not earlier than in 7 years). This project is also interesting for Russia, since the new route to the Indian Ocean will be twice as short as the route through the Turkish straits and the Suez Canal and will become an alternative to the existing route through the Bosphorus - Dardanelles - Suez Canal and the Red Sea. It must be remembered that relations between Russia and Turkey are not experiencing a better period. 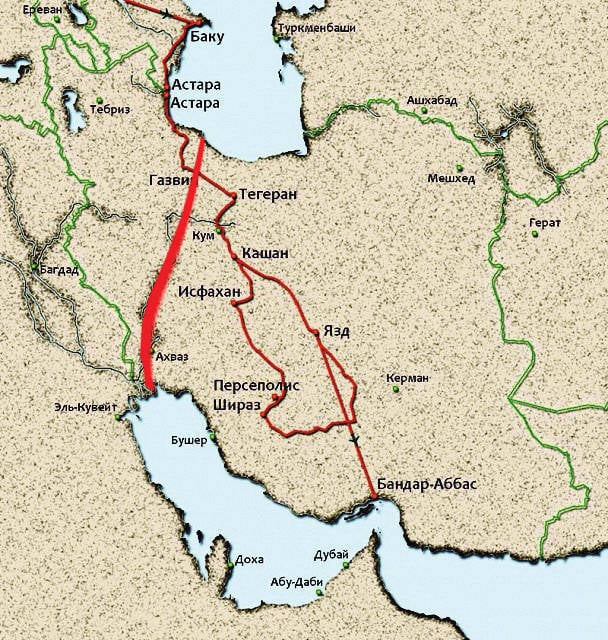 Candidate of Economic Sciences Alexey Chichkin on the site "Military Industrial Courier" recalls that the Caspian-Persian Gulf shipping canal project was developed by Russian engineers in 1889-1892. The proposed route would provide the shortest way for Russia to the Indian Ocean basin, and the Turkish straits Bosporus and Dardanelles would become unnecessary for this.

“The appearance of the project was prompted by the collective refusal of England, France, Austria-Hungary and Germany to support the Russian 1878 proposals for the Bosporus and the Dardanelles on the control of St. Petersburg over these straits and the deployment of its military bases along their coast.

The fact is that over half of Russia's foreign trade was carried out in this way. And it was precisely through him that the interventionists, supported by Turkey, repeatedly penetrated into the Black Sea and, accordingly, to the shores of the empire. ”

In 1908, negotiations were suspended: among other things, pressure from Istanbul and London contributed to Tehran. Then there was the First World War.

Further, under Stalin and later, both parties made several attempts to reanimate the project, but the implementation of the plans was hindered by one thing or another. In addition, the United States and NATO interfered with construction. The West has never rejoiced at the possible emergence of such a channel and is still not happy with it. In 1997, US anti-Iran sanctions did not accidentally spread to the specified project.

Today, let us add to this, when Turkey has spoiled relations with Russia, when President Erdogan behaves like a “neosultan”, which even NATO doesn’t approve of, the water alternative to the Turkish straits is important for Russia. After the lifting of sanctions, Iran can fully return to the old project. Only investment is needed.

On the other hand, experts note the likelihood of economic problems.

Reserve Colonel Oleg Antipov in 2012 said IA "REX"that the topic of the channel is very interesting for Russia and Iran, as well as for the countries of the region: India, China, Pakistan and others. However, in addition to the pressure of the United States, it is necessary to remember about the ecology:

“... we must remember about ecology. After all, the Caspian is below sea level, and it is bound to clog it with species of algae or even fish that are not peculiar to it. Then sturgeon and beluga come to an end. And traditional Russian black caviar will cease to please us even on big holidays. So you have to weigh everything before building this channel. And of course Iran needs to obtain the consent of all the countries of the Caspian basin before the construction of such a channel.

For me, the topic is dear, I nevertheless grew up in Baku on the Caspian coast, and I would like this pearl of nature to continue to delight our descendants, and not become a gutter. ”

In the same year 2012, political scientist Ilgar Velizade on the website "Iran.ru" reminded that Iran "never ceases to amaze with its plans." Among the latter, an expert named projects for the transfer of desalinated waters of the Caspian Sea to the central regions of the country and the construction of a shipping canal connecting the Caspian Sea to the Persian Gulf.

Velizadeh notes that the Framework Convention for the Protection of the Marine Environment of the Caspian Sea (the "Tehran Convention") was signed in Tehran in November 2003. Among the priority areas of the document is the theme of state cooperation in developing agreed measures to mitigate the effects of fluctuations in the level of the Caspian Sea. “I don’t think that Tehran will depart from its practice of carefully weighing all the pros and cons and take an irresponsible decision,” said the expert.

Iranian ecologist, professor Ismail Kahrom is skeptical of this project. According to him, 1 liter of water in the Caspian Sea contains 13 grams of salt. The use of such water for agricultural purposes is impossible, and it is not profitable to desalinate it.

According to the ecologist, there are no land suitable for agriculture in the Iranian province of Simnan and the central regions. The soil there is predominantly sandy and clayey, and with its abundant irrigation solonchaks can occur and the soil salinization process can be activated, that is, their final withdrawal from agricultural use.

Chichkin mentioned above has a different opinion.

“The Caspian-Persian Gulf shipping channel, which runs entirely through Iran, is capable of providing the shortest possible access to the Indian Ocean basin from the North Atlantic, Baltic, Black Sea-Azov, Danube and Volga-Caspian basins. Iran needs this route not only as a transport corridor, but also as a source of fresh water supply to the central arid regions of the country, ”the portal quotes it. “To lead. Economy".

The length of the shipping route under the project will be about 700 km, including along the river beds of northwestern and southwestern Iran, including the international Shatt al-Arab riverbed bordering Iraq (about 450 km). Investment is required in the amount of about 10 billion dollars. The new channel could provide both Russia and Iran with transit revenues (respectively 1,2-1,4 billion dollars and 1,4-1,7 billion dollars) from the third to fourth year of operation.

Azerbaijan believes that the idea of ​​the proposed channel is technically impracticable. An expert in the field of water management Ibrahim Mammadzade claims that the use of the Shatt al-Arab river in the project is highly questionable. “This river is far from being a navigable artery, like other rivers mentioned in the project,” he said. Utro.ru.

As for Russian politicians and experts, no comments have yet been received from them regarding the “reanimation” of the channel. In principle, the silence of the authorities is clear: in conditions of low oil prices and sanctions, the budget is emaciated, and the country's economy is going through bad times. In such conditions, large-scale investments for Moscow are hardly risen. Moreover, no matter how “tempting” it is to bypass Ankara with its “Sultan”, we are not talking about a quick return on investment. One must also remember the pressure of the West, which has long objected to such a project.