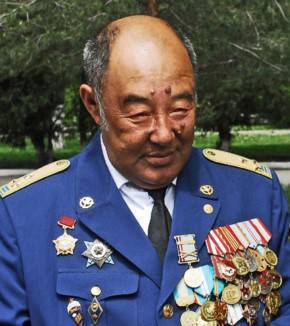 A combat commander - as colleagues call Boris KERIMBAEV - the legendary Kara-Major, who commanded the battalion of special forces of the 15-th separate brigade of the Main Intelligence Directorate of the General Staff of the USSR. For the head of Kara-Major, the field commander of the Dushmans Ahmad SHAH MASUD, who controlled the Panjshir Gorge in Afghanistan, promised a million dollars!


Much more the leader of the dushmans was ready to pay Kerimbaev personally - so that he would not put a barrier to his caravans with drugs and weapons. So Kara Major could become a dollar millionaire overnight. If it were not for his other values ​​- honor, duty, Motherland ...

... Recently, Boris Tokenovich underwent a difficult operation, and doctors recommended him complete rest. Now retired colonel Kerimbayev lives with his wife Raisa for a modest military pension in an apartment with a poor living environment. In connection with the deteriorating health of 68-year-old Boris Tokenovich stopped traveling to meetings with cadets and colleagues. But fighting friends often visit the battalion commander and support his family. Afghans say: such meetings allow the veteran to keep himself in good shape - in recent years, the wounds received during the war have troubled Kara-Major more and more often ...

While he was in the hospital, veterans of the Afghan war, well-known politicians, businessmen and generals (both current and retired) made a proposal to award the retired colonel Kerimbaev the title of Khalyk Khaarmany.

“We have a lot of worthy Afghan veterans, but Boris Tokenovich is the best among us,” says the First Deputy Chairman of the Afghan War Veterans Association, Hero of the Soviet Union Nikolai KREMENISH. - First of all, for him it will be a huge moral support. We fought, there were losses ... Surviving in that hell, we returned home and ... faced with injustice. The country became independent, and the first years were hurt when we were told: what kind of international duty we didn’t send you to this war ... And if today we don’t write this history the Afghan war, then tomorrow there will be no one to write it. I really want to be awarded - as long as the legendary Kara Major is alive ...

... Once, Major Kerimbaev was assigned a combat mission: he must take control of all 120 kilometers of the Panjshir Gorge in order to ensure the unimpeded movement of Soviet troops deep into Afghanistan. General staffers have established a clear time - 30 days. Ordered and ... forgot!

And just before the start of the special reconnaissance operation, Ahmad Shah Masood swore on the Koran before his thugs: they say that in just a month he would fry the last fighter of the special forces battalion (often this unit, headed by Boris Kerimbayev, was called the Muslim battalion). These words of the field commander spread all over Afghanistan: the local people knew that he was not throwing words to the wind. A special report was laid on the table by Marshal SOKOLOV, commander of a group of Soviet troops in Afghanistan. He summoned Kara Major and ordered: to keep the gorge at all costs for 30 days!

- We were thrown into the gorge, promised to withdraw in a month, but forgot. I had to run for eight months in Panjshir over the mountains and fight with Ahmad Shah Massoud. And all these months, while we were standing in Panjshir, on our way from the border of the Soviet Union to Kabul, which was controlled by Ahmad Shah, our columns were calm, - Kara-Major recalled this at a meeting with the cadets of the military school.

Kerimbaeva’s battalion, a little more than 500 bayonets, opposed Massoud’s huge army of militants. The field commander was perplexed: how did a handful of fighters-shuravi keep the gorge under control for almost a year ?! It was then that Ahmad Shah promised a million award for the head of Kara Major. But there were no traitors surrounded by the Kerimbaev battalion commander, and the spooks dubbed the Soviet major King Panjshir. The battalion fulfilled the combat mission, and the political leaders sent a show to Boris Kerimbayev - award the Order of Lenin and assign the title of Hero of the Soviet Union. But the battalion commander did not wait for the high award ... Upstairs they decided: if he had survived after the special operation - why reward? That would die the death of the brave ...

- Why posthumous ?! - Kremenish wonders today. - A person needs to appreciate while he is alive! Of course, all Afghans are upset that the Soviet authorities did not appreciate the exploits of Boris Tokenovich, although the decision to appoint him as a commander of the special forces battalion in 1981 was made in the Kremlin.

According to Nikolai Kremenish, a retired colonel Kerimbaev could have got a general's shoulder straps in Soviet times, if not for his character: Boris Kerimbaev was not only a brave commander, but also a cocky one. Without hesitation, he objected to any high-ranking officer of the General Staff, if he did not agree with the orders from the Moscow offices. But for his soldiers he was sick of his soul, he found the only necessary words for 18-year-old boys. He always said to them: “Sons, you are not cannon fodder!”

- Recently a veteran of the Afghan war, Bakhytbek SMAGUL, wrote the book “King of Panjshir”. In this book, the whole truth about the legendary combat, about his life before and after that terrible war. I myself fought for two years, before the deputy commander of the platoon was served. Honestly, that war became a real hell for the boys, who for the first time took up military weapons in their hands in 18 years. Many were killed in the first months, and if it were not for such commanders as Boris Tokenovich, believe me, there would be much more victims, - Nikolai Kremenish is sure.

... In one of the interviews, the legendary battalion commander Kerimbayev said: "All the boys who died in the war, -
heroes! What does it matter under what circumstances a soldier or officer died? He is a hero - that's all! ”
In the mouths of a living hero - King Panjshir - these words take on a special meaning ...