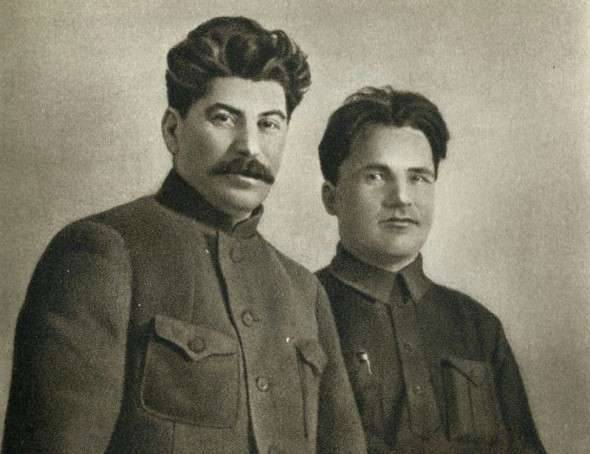 130 years ago, 27 March 1886, a Soviet politician and statesman Sergei Kirov was born. An intelligent and energetic leader could be Stalin’s successor, but he was killed as a result of the 1 assassination attempt on December 1934. The opponents of Stalin created a black myth that Stalin was involved in the death of Kirov and used this loud murder to start mass repressions.


Sergey Mironovich Kirov (real name - Kostrikov) was born in the family of a forester in Urzhum of the Vyatka province 15 (27) in March 1886 of the year. Four of the first children in the family died in childhood. Then Anna, Sergey and Elizabeth were born. In 1894, Sergey and his sisters were orphans - his father went to work and went missing, and his mother died. Sergey and his sisters were brought up by their grandmother, and after her death at the age of 7 years was transferred to an orphanage.

Sergey graduated from the Urzhum parish, and then - the city school. He studied well, during his studies, he was repeatedly awarded letters and diplomas. In the autumn of 1901, he left for Kazan, entered the Kazan Lower Mechanical-Technical Industrial School at the expense of the Zemstvo and the Board of Trustees of the Urzhum City School at the request of the teachers of the shelter and teachers of the city school. In 1904, he completed his education, receiving a first-degree award, being among the top five graduates of that year. In 1904, he began working as a draftsman in the city of Tomsk and studying at the preparatory courses of the Tomsk Institute of Technology.

In Tomsk, in November 1904, he joined the RSDLP. In 1905, he participated in a demonstration for the first time and was arrested by the police. After getting out of prison, he led the fighting squads. In July, 1905, the Tomsk City Party Conference elects Kirov as a member of the Tomsk Committee of the RSDLP. In October, 1905 of the year organized a strike at the large railway station Taiga. In July, 1906 was arrested and imprisoned in the Tomsk fortress (prison) for a year and a half. Thus, Sergey Kostrikov became a professional revolutionary.

In 1909, he comes to Vladikavkaz, becomes an employee of the North Caucasian cadet newspaper "Terek". He heads the organization of the RSDLP in the Caucasus. 11 August 1911 Kirov was arrested in Vladikavkaz in the case of the Tomsk underground printing press, it is transferred to Tomsk. However, the 16 March Court of 1912 of the Year issues an acquittal for lack of evidence. He returned to Vladikavkaz in April 1912. The pseudonym "Kirov" was taken by the name of Cyrus rather accidentally. In April 1912 of the year, the newspaper “Terek” published an article “Across the road”, for the first time signed “S. Kirov. Under this pseudonym, he entered history THE USSR.

Kirov was an ardent opponent of the Trotsky-Zinoviev opposition. And when he became the first secretary of the Leningrad Regional Committee, the first thing was smashing this opposition in the city to smithereens. Kirov entered the close circle of Stalin's comrades. In turn, Stalin supported Kirov in clashes with the Leningrad opposition. In addition to political work, Kirov paid great attention to the development of the industry of Leningrad and the entire North-West district, and he also loved books and collected a huge personal library.

1 December 1934, in the building of the Leningrad regional party committee in Smolny, Sergei Mironovich Kirov was shot dead. Under Khrushchev in the USSR, the myth was launched that Stalin was the organizer of the murder of Kirov. Khrushchev directly accused Stalin of the fact that by setting up his cult, he unleashed mass repressions against “honest communists” who were killed almost immediately after their arrests. Allegedly, the reason for the repression of these innocent people was the mysterious murder of the first secretary of the Leningrad regional party committee, Sergei Kirov.

Speaking at the Twentieth Congress of the CPSU, Khrushchev said: “... It should be said that the circumstances surrounding the assassination of comrade Kirov are still fraught with a lot of incomprehensible and mysterious and require the most thorough investigation. There is reason to think that someone helped Nikolayev’s murderer of the people who were obliged to protect Kirov. A month and a half before the murder, Nikolaev was arrested for suspicious behavior, but was released and not even searched. It is extremely suspicious that when the 2 security officer attached to Kirov, 1934, was taken for interrogation, he was killed in a car “accident”, and no one was escorted. After the murder of Kirov, senior officials of the Leningrad NKVD were removed from work and subjected to very lenient punishments, but were shot in 1937. One may think that they were shot to cover the traces of the organizers of the murder of Kirov. ”

Thus, Khrushchev de facto identified Stalin as the main organizer of the murder of Kirov. However, this is only one of the false myths written in order to discredit the era of Stalin and whitewash Khrushchev himself. First, Stalin and Kirov were very close friends, as eloquently evidenced by the inscription of Stalin on the book “On Lenin and Leninism” donated to Kirov: “To my friend, my beloved brother, from the author”.

Secondly, Stalin did not have any relation to the death of the leader of the Leningrad Communists - Kirov, since he was shot in a fit of jealousy by a small party worker named Nikolayev, whose wife had a stormy love affair with Kirov. Kirov had a close relationship with Milda Draule, the wife of Nikolayev. In general, Sergey Kirov was a lover of women (despite the fact that his wife was seriously ill), especially ballet dancers of the Mariinsky Theater. In addition, Nikolaev suffered from a mental disorder and suffered from delusions of grandeur. Nikolayev’s diary was declassified in 2009. According to the records in him, Nikolaev decided to take revenge on Kirov for his dismissal from the Institute of Party History, after which he became unemployed. Nikolaev himself compares himself with the killer of Alexander II, Andrei Zhelyabov. Thus, mental disorder and personal motives became the reason for the murder.

It should be noted that the household motive does not reject the version of the “Trotsky plot”, since such people like Nikolaev are easily used in a dark. There are quite a few oddities. For example, the fact that Kirov was alone in the corridor, and where his guard was, is not known. When Stalin, who arrived in Leningrad, demanded that Kirov-Borisov, a security guard, be brought to him, then instead of a security guard, he was brought his body. It is interesting that, firstly, from the moment Stalin voiced the demands to immediately bring Borisov to him for questioning until the last one died, only 30 minutes passed. Secondly, the driver Kuzin, who along with two operatives - Maliy and Vinogradov - carried the security guard Kirov Borisov for interrogation to Stalin, and then, and more than twenty years later, that is, already under Khrushchev, showed the same thing. That both employees - Maliy and Vinogradov - prevented him from driving normally, staged a traffic accident, snatching the steering wheel from him, as a result of which the car crashed into the wall of the house, after which he found Borisov’s corpse in the back and the opera themselves escaped. They were quickly caught and shot. His cousin planted. That is, "ends in the water." After serving, Kuzin at the height of the Khrushchev campaign of de-Stalinization again, almost word for word, repeated what he had said to Stalin.

Third, Stalin saw in Kirov one of his possible successors. Personally, Stalin himself pushed Kirov into the general secretaries. Immediately before the assassination attempt, Stalin officially, at the Politburo, proposed to elect Kirov as secretary of the Central Committee and release him from work in Leningrad, citing this with his state of health and age. Stalin liked the intelligent, active, authoritative, well aware of the danger of Trotskyism, besides Russian-born Kirov. Therefore, Stalin could not be the organizer of the murder of Kirov.

The basis of the myth was laid by one more member of the old "Leninist Guard" - Nikolay Bukharin. The myth was born in the form of a vile and dirty couplet, compiled personally by Bukharin (it was a whale at every kind of gossip): “Eh, cucumbers and tomatoes, Stalin killed Kirov in the hallway ...” in the hallway ... "). Other, less venerable "tongues" and emigrants followed Bukharin. The greatest contribution to this “theory” was made by one of the most terrible enemies of the Russian people - Trotsky. His followers followed him. As a result, the traitor and the hidden Trotskyite Khrushchev publicly smashed this abomination throughout the Union.

The essence of the myth was as follows. Even at the XVII Congress of the CPSU (b), delegates wanted to elect Kirov as general secretary of the party and even voted for it. However, Stalin falsified all the voting data and then eliminated Kirov as a supposedly dangerous competitor. In 1937, Mr. Stalin reached the rest of the delegates to this congress, which is why he was called the “congress of those executed”.

On the instructions of Khrushchev, Olga Shatunovskaya (she was repressed in 1937 and had a grudge against the Stalinist empire) took up the “investigation”. She nakropala already 64 volumes of all kinds of nonsense of various kinds of aspiring Trotskyists, who shared rumors and frankly lied. Therefore, Vyacheslav Molotov, head of the first commission of the Central Committee of the CPSU to investigate the murder of Kirov (1956-1957), and made the correct conclusion: “Khrushchev hinted that Stalin had killed Kirov. Some people still believe in it. The grain was thrown. A commission was created in 1956. A man of twelve different people watched a lot of documents, did not find anything against Stalin ... The commission concluded that Stalin was not involved in the murder of Kirov. Khrushchev refused to publish it - not in his favor. ”

In this way, a lot of facts indicate that Stalin had no relation to the murder of Kirov and could not have it, since they were close friends and political allies loyal to each other. The myth is still used in anti-Stalinist propaganda, apparently due to the fact that the notorious Dr. Goebbels said: "Lie, lie and lie again - the more you lie, the more firmly they will believe."

Ctrl Enter
Noticed oshЫbku Highlight text and press. Ctrl + Enter
We are
Myths of the Great Patriotic. Did Stalin have prostration in the first days of the war?The murder of Kirov as a pretext for political terror
Military Reviewin Yandex News
Military Reviewin Google News
121 comment
Information
Dear reader, to leave comments on the publication, you must sign in.