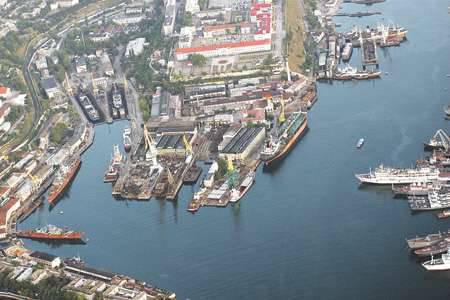 30 March 2015 was signed by the Government of Sevastopol together with the United Shipbuilding Corporation (USC) a Memorandum of Cooperation to restore the Sevastopol Sea Plant named after Sergo Ordzhonikidze. Over the past year, the management of the company, despite a number of objective difficulties, managed to solve the issues of leasing the main production capacity of the enterprise for 49 years, approve the road map for integrating the enterprise into the USC, practically re-form the team and proceed to fulfillment of orders - repair and maintenance of the marine technology.

History The Sevastopol Marine Plant, which now has a branch of the Severodvinsk shipyard Center Ship Repair Zvezdochka, which is part of the United Shipbuilding Corporation, is located at the forge built by sailors of Fedot Klokachev’s squadron on the bank of the Ahtiar Bay in 1783.

The fate of the plant to the smallest details repeats the fate of the "worthy worship" of the city. And not just repeats, but also complements the chronicle of Sevastopol with new and new pages. The plant worked, fought, retreated and advanced, experienced ups and downs, interspersed with truly great achievements in bitter periods of timelessness and decline ...

How could it happen that in a matter of years, one of the oldest Russian shipyards, at the berths of which ships and vessels sometimes had two or three hulls, came to a state of almost complete stagnation, it’s still not very clear - even taking into account the well-known “objective difficulties” ”, Dropped out as tests of the current generation. But the fact remains that in just two decades that have passed since the collapse of the Soviet Union, as a result of which the Sevmorzavod became the property of Ukraine, after privatization and corporatization, the transfer from one owner to another from a 16-strong collective who had once worked at the shipyard about two hundred workers - mainly security and managers. With a section of the Black Sea fleet between Russia and Ukraine, the transformation of ocean fishing associations into тю tyulkina fleet ’, the ubiquitous feverish pulling and selling of sea transport organizations, the Sevmorzavod was left almost without orders, and workers were without salaries. And this predetermined the further fate of the enterprise - silent dying.

In Sevastopol, there is a perception that the previous owners have bankrupt a unique enterprise quite consciously: in recent years, the land in the very center of the hero city, on the shores well protected from the winds and never freezing in Sevastopol and South bays, has become very expensive. Old workers now say that for the demolition of factory workshops and the construction in their place of luxury real estate overlooking the potential yacht marinas, the former owners "simply did not have enough time."

This partly surrealistic plan has lately, by the way, written and much said. Director of the United Shipbuilding Corporation in the Republic of Crimea and Sevastopol and the CS Zvezdochka branch in Sevastopol Igor Drey is convinced that the fixed assets of the Sevastopol Marine Plant are mostly saved only by the concerns of his workforce and the council of veterans numbering hundreds of active bayonets.

“This plant was and remains the meaning of life for thousands of caring people of Sevastopol, their family members, one of the symbols of Sevastopol,” says Igor Drey. “That is why no one decided to destroy the enterprise completely, which is why today there is every reason to talk about the coming revival of the Sevastopol Marine Plant and a new stage in the history of the oldest Sevastopol enterprise.”

The “process,” as they say, has already begun, and its dynamics are impressive. 30 March 2015 was signed by the Government of Sevastopol together with the United Shipbuilding Corporation Joint-Stock Company a Memorandum of Cooperation was signed to restore the marine plant. The next step in the implementation of this plan was the interaction between the SUE "Sevastopol Marine Plant them. S. Ordzhonikidze ”and the joint-stock company“ Center of Ship Repair “Zvezdochka” - one of the most famous specialized enterprises in the Russian shipbuilding industry. The Sevastopol branch of the Severodvinsk shipyard began counting its activities in May last year almost from scratch. Over the past year, after signing the Memorandum and establishing interaction with the “Zvezdochka” Ship Repair Center, the Sevmorzavod leadership managed to form a team, the backbone of which was qualified and experienced Sevastopol shipbuilders, to carry out a preliminary audit of the existing capacities, to outline plans for production modernization. And the most important thing is to start working on the main specialization without the “buildup”.

Since the beginning of 2015, the Sevastopol Marine Plant, with the assistance of USC, has received orders and has already completed repair and restoration work on the tanker Kostroma, the steamer Artekovets, the ferry Alexander Tkachenko, tugboats Calamite and Sevastopol. At the docks of the enterprise, the middle sea tanker Iman of the Black Sea Fleet and the sailing training ship Khersones were repaired. Active work is underway to receive new orders in the field of ship repair. The team is growing. Tens of millions of rubles of taxes and fees are listed in budgets of all levels.

The landmark in the process of restoring the plant was the mooring at its outbuilding berth in October last year, the newest diesel-electric submarine "Novorossiysk" for the final decoration and painting of the submarine hull after the interflight transition. The plant has already organized a special design and technical bureau of the Black Sea Fleet (SPTB Black Sea Fleet) "Admiralty Shipyards" with the aim of further servicing the submarines, which several should come to the Black Sea at once, and perform all types of repair of warships, including emergency ones. This is a strategically important aspect with which the further revival of the competences of the enterprise, which was once the main partner of the Black Sea Fleet in the area of ​​ship repair, is connected. Now the fleet is actively being updated, and the availability of the coastal infrastructure necessary for the maintenance of ships and submarines is critically important to it. Therefore, the main tasks assigned to the leadership of the Sevastopol branch of Zvezdochka by the President of the United Shipbuilding Corporation, Alexey Rakhmanov, are primarily related to the fulfillment of the state defense order and the utilization of the plant’s production capacities with civilian orders.

For an effective activity in this area, the young team, which already numbers more than 400 people, of course, has a lot of work to do. The Zvezdochka branch in Sevastopol lacks a lot today. The energy blockade of the Crimea is still widely known, as a result of which the plant experienced certain difficulties (but did not stop work for a single day). The equipment available is outdated both morally and physically. Lack of working capital, tools, materials, transport, computing equipment. There is a need for qualified specialists who, during the stagnation period, were forced to leave to work in other regions or changed their type of activity altogether. Over the past years, the once exemplary social base has been irretrievably lost - the stadium, the Palace of Culture, the polyclinic, the community center, canteens, dormitories, boarding houses, and summer camps for children. All of the above and many other problems need a quick and comprehensive solution.

In this regard, Sevastopol shipbuilders inspire confidence in the future for a clear implementation of the schedule for the implementation of measures for the reconstruction and technical re-equipment of production facilities. The “roadmap” of integration processes is in the focus of attention. The federal target program provides for the allocation of about 7 billion rubles. on the development of the plant in the period 2016 – 2019's. This year it is planned to conclude contracts for the supply of modern equipment in the amount of 1,5 billion rubles. Both the main facilities of the ship repair complex and the shipbuilding industry, which the Sevastopol enterprise once was famous for, will receive a new life.

In mid-February of this year, at a meeting of the Military-Industrial Commission in Naberezhnye Chelny, Russian President Vladimir Putin set the task of increasing the efficiency of the Crimean enterprises of the defense-industrial complex. He, in particular, noted that now in the Crimea and Sevastopol the corresponding organizational work is being actively carried out, regional structures have joined the all-Russian MIC system, the production load is growing, the number of people employed in this area is increasing.

“We need to look at the prospects of these enterprises, increase the efficiency of existing industries, bring the quality of products to a new level, expand its range,” Vladimir Putin demanded. He stressed that this year, as part of the development program for the defense industry, financing will begin for the modernization of Crimean enterprises. “The funds will be used to update technological lines, train new professional staff and improve the skills of specialists employed in the Crimean defense industry,” said Vladimir Putin.

One of the first events planned by the new management of the enterprise was the restoration of the city sights - the hours at the entrance of the Sevmorzavod. It took some time to get a new tower clock and make repairs. And in the summer of last year, the indication of the time of day, air temperature, humidity and pressure on the turret above the “Ordjo” checkpoint, as the common language indicates the Sevmorzavod in Sevastopol, was resumed. “Time has gone!” - citizens in the forums and in social networks exulted in this connection. Linking, of course, with this small symbolic event all my hopes for a new life and a new stage in the life of the Sevastopol Marine Factory, the hero city itself and the whole Crimea. Now, as part of its historic homeland - the Russian Federation.

Ctrl Enter
Noticed oshЫbku Highlight text and press. Ctrl + Enter
We are
"We are devoted to these stones to infinity"Shipbuilding Center as a first step
Military Reviewin Yandex News
Military Reviewin Google News
47 comments
Information
Dear reader, to leave comments on the publication, you must sign in.