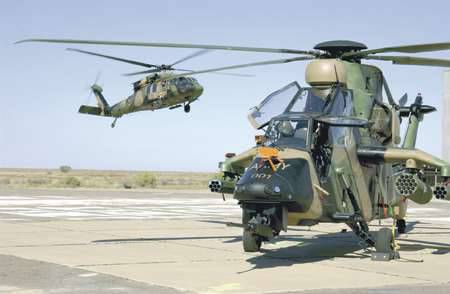 Military experts of the North Atlantic Alliance shed crocodile tears in the vest of Western public opinion. The American Analytical Center Atlantic Council (Atlantic Council), associated with NATO, the State Department and US intelligence agencies, recently presented a report actively quoted by the British Financial Times, the BBC radio and television broadcasting corporation, as well as the Baltic editions. Among them is the Russian-language portal Delfi. The meaning of this report is extremely simple - in its current state, the forces of the North Atlantic Alliance are allegedly unable to protect the eastern borders of the EU "in the face of an increasingly aggressive Russia." The reasons for which it was not worth even to doubt are obvious - the “chronic underfunding” of NATO and the “acute shortage” of modern military equipment in the armed forces of the countries of the alliance.

The report, for example, notes that out of 31 Tiger helicopters armed with the Bundeswehr, only 10 are suitable for use, and out of 406 Marder infantry fighting vehicles, only 280 can be used there. Other member countries of the alliance are not enough advanced in changing their defensive positions eastward. Things are especially bad in the UK, the report says. It became a very serious problem for her to deploy a brigade on a state of constant alert, not to mention the division. Last year, in order to provide one of NATO’s exercises in Europe, it had to transfer tanks from the west of Canada, “because the situation with spare parts and supplies fleet in the UK is extremely deplorable "...

And all this against the background of the fact that, according to the report, “according to not the most optimistic calculations, after 10 years of growth in military spending and ambitious, far-reaching reforms of former Defense Minister Anatoly Serdyukov, Russia now has enough conscript soldiers (without taking into account the mobilization reserve ) to support simultaneously three major operations: the attack on the Baltic countries, the fighting in Poland and the blocking of government troops in eastern Ukraine. ”

Let us leave behind the attempt of the Atlantic Council to reduce Russian military reforms only to the identity of the former defense minister, as if the current head of the domestic military department, who has been actively working over the past four years to increase the combat readiness of the army and navy, has nothing to do with it. God be with them - cheap overseas schemers. We will not pay attention to the obvious nonsense - as if the number of soldiers on an urgent service determines the potential capabilities of our army (by the way, there are a lot less of them today than contract soldiers - 275 thousand against 320). Including provocative horror stories about our attack on the Baltic States, the battles in Poland and the blocking of government troops in Ukraine. Tired of repeating that our army does not have any such plans and is not expected. But here, as they say, spit in the eyes - all of God's dew.

Only here it is impossible to be surprised that NATO does not have the means to curb “Russian aggression”. You read these moans and wonder: where, one wonders, do 28 taxpayers' money go to Western countries, and this is nothing less than, and almost 750 billion dollars - the cumulative military budget of the NATO member states (10 times more than, for example, military the budget of Russia), if the command of the alliance, as well as the heads of the military departments of the participating countries, are not able to provide their armed forces with the most elementary for these billions? Including spare parts for helicopters and infantry fighting vehicles.

I remember that we, Russian journalists who repeatedly visited the headquarters of the alliance, were regularly told how great the logistics service was for the NATO members. All components for a particular military equipment are listed in special computer files. Warehouses in the same Germany or Belgium store their monthly stock. Should any army send a request to the central office with a request to send an engine of such and such a brand to an armored personnel carrier in service with such and such a brigade in such and such a settlement, after two to three hours (short distances in Europe) the engine will be delivered exactly at the address and is immediately installed on a combat vehicle. All this was served under such a sauce: they say, learn, guys, how to organize the supply and provision of your troops at the modern level. Not like in your army, where for half a year, if not more, coordination and expectations of some missing bolt for tank guns.

To believe in this is impossible. And I would not have believed it if not for the authors of the report. And among them is the former Secretary General of the Alliance Jaap de Hoop Scheffer, the former deputy commander-in-chief of NATO forces in Europe, English General Richard Schirreff, and the former Italian defense minister and chairman of the NATO Military Committee, Admiral Giampaolo di Paola ... Someone who already needs to know what is going on in their “office” and why they are chronically short of money. Is it really scary to think they steal into NATO? Or maybe his officials spend the money of European and American taxpayers, as they say, not for their intended purpose - not to protect them from the "Russian threat", not to develop, manufacture and purchase the most modern combat equipment and combat support systems, but to some extraneous things? Like the construction in the suburbs of the Belgian capital of a new ultra-modern glass and concrete building of the headquarters of the alliance, very similar to a crab or spider, sucking blood or juice from the Old Continent.

But let's not talk about sad things.

One thing is unclear how this Yaroslavna transatlantic lament from the Atlantic Council’s analytical report on the extremely vulnerable weakness of the North Atlantic Alliance before the “Russian military threat” comes from the statements of the European Command of the Armed Forces of the United States in Europe General Philip Bridlav, which he delivered before the congress of the United States, the full readiness of the forces of the alliance to fight in Europe with Russia and defeat it. There must be one thing: either - or. As they say in our yard, you guys either take off the cross or put on your underpants.

Of course, it is gratifying that former and present NATO leaders praise the combat power of the Russian Armed Forces. True, without them we know that our army and navy represent something. The fact that the United States was forced to sign the Treaty on Measures to Limit and Reduce Strategic Offensive Arms (START-3) with Russia, thus recognizing that the security of our country and the security of the United States are identical, testifies to the real respect for our ability potential adversary unacceptable damage. Yes, and the recent joint statement by Moscow and Washington on the cessation of hostilities in Syria also convincingly proves that the United States was impressed by the actions of our aerospace and naval group in this Arab republic, which helped the Syrian government army to completely free the terrorists banned in Russia by the “Islamic State” and “Dzhebhat an-Nusra”, as well as other militants of the province of Latakia, Aleppo and Homs. And although they do not abandon attempts to replay this situation or use our successes on the Syrian front for their own benefit, the recognition of President Barack Obama about the strength of the “second world army” although in our country is not misleading, but in any case is significant. Especially after he tried to belittle the role of Russia in the modern world, calling it a regional power.

A tangle of blatantly contradictory statements by Western politicians, generals and admirals, where, on the one hand, there is a real assessment of the combat power of the Armed Forces of Russia, on the other, absurd fantasies about their aggressive nature (judged, apparently, by themselves), and third, readiness to fight and defeat our country and - from the fourth - the wailing about the impossibility of doing this, since NATO lacks the strength for this, modern military equipment, and most importantly - financial resources, has long been an open secret and is explained surprisingly simply by the desire to warm the ki or, in other words, to earn a malodorous product - "Russian military threat." Every time when the US begins the discussion of the military budget for the new fiscal year, which, by the way, begins on October 1, in the press, on television, in publications of various think tanks, in the speeches of the defense ministers, NATO Secretary General and other stakeholders and the same theme - give money, more and more money. And the Russians will come, and oh, how bad it will be to all-all!

This moan is heard both in the USA and in Europe. The Welsh NATO Summit 2014 of the year decided to allocate 2% of each member country’s GDP to the overall organization’s budget. Do you think they took everything under the visor and immediately transferred the required amount to the NATO wallet? As if not so. Only two states - Estonia and Greece - made such a contribution. And Athens, apparently, ordered the loan that the EU allocated to them to save the economy of Hellas. Well, a penny from 2% of Estonian GDP, of course, no one in the alliance noticed. But the rest of the country - Lithuania, Latvia, the same Poland and even Germany - hesitated around 1% of GDP. It is reasonable to calculate that the United States will pay for them. Nearly 80% of the NATO budget is American money. Why waste yours if there is a kind Uncle Yankee who will pay for everything if he wants to steer Europe? Very good position.

And therefore, analytical centers, that across the ocean, on this side of the Atlantic, can compose everything they want. Involve any politicians and generals in writing their reports. Though retired, at least acting. They can shed as many crocodile tears as they want - oh, poor, poor, poor NATO! Oh, ё-ё-ё ... not today, tomorrow Russians will attack, but we have nothing to protect orphans - the Baltic countries, poor Poland and the undressed and dispersed government troops of Ukraine ...

Amazing Solid people in the West, one might say, the military and political elite, sing it from year to year, like clowns in the circus arena, and do not blush at all. Yes?!

However, real clowns have nothing to do with it. The author did not want to offend them.