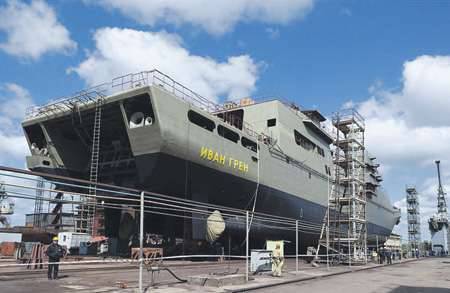 We have repeatedly addressed the topic of reporting by the heads of the military department of the Russian Federation and the command of the Navy fleet regarding the replenishment of the naval ship. And each time their reports on the work done during the year were puzzling (see NVO dated January 17.01.14, 16.01.15 and January 11, 2015). March 11 at the National Defense Center of the Russian Federation was a single day of acceptance of military products. It again touched on the issue of the supply of ships and vessels of the Russian Navy in XNUMX. Recall that the same thing was said at an expanded meeting of the board of the Russian Defense Ministry on December XNUMX last year.

Then the head of the Russian defense ministry, Sergei Shoigu, said that last year the Russian Navy carried out "the delivery of two multi-purpose submarines and eight surface ships." We questioned the last digit (see “IEE” from 22.01.16). The fact is that last year the Russian fleet received only two surface combat ships. These are the small rocket ships (MRK) "Green Dol" and "Serpukhov" of the 21631 "Buyan-M" project. Obviously, three new auxiliary vessels were included: the oceanographic research vessel Yantar of the 22010 project, the sea transport of weapons Akademik Kovalev of the 20180TV project (20181) and the rescue vessel Igor Belousov of the 21130 project , Completed seven-year repairs and upgrades. But even with their account, it turns out not eight, but six units.

DISSOLVED BY SHIPS AND SUBMARINES

In the opening remarks on a single day of acceptance of military products, President Vladimir Putin, of all naval equipment supplied to the Armed Forces of the Russian Federation in 2015, mentioned only two submarines. We are talking about the really received by the fleet diesel-electric submarines "Stary Oskol" and "Krasnodar" of the 06363 project.

But at the same event, quite different data was announced by Deputy Defense Minister Yuri Borisov. He said that the fleet was replenished with four warships, four submarines, 52 ships and auxiliary vessels.

First of all, let us draw attention to the fact that in comparison with the figures from the speech of the Supreme Commander, as well as the Minister of Defense, the number of submarines has doubled. Maybe Yury Borisov has some secret information that is unknown to Vladimir Putin and Sergei Shoigu, and he corrected the head of state and his boss? It's hard to imagine. Most likely this is the result of manipulations, which are often resorted to by military officials. In the 2014 year, for example, they included the Yekaterinburg strategic missile submarine (SSBN), which was repaired and upgraded, among the new submarines. Thus, to the three actually new submarines added one more unit, which improved the fleet renewal rate. But for some reason they forgot about the nuclear submarines Obninsk of the project 671РТМК and Tomsk of the project 949А, as well as the diesel-electric submarine Vyborg that were repaired in the same year.

It seems that the number "4" loved by the Ministry of Defense. The military department again started talking about four submarines that allegedly replenished the naval personnel of the Navy already in 2015. In addition to the “Old Oskol” and “Krasnodar”, the multipurpose nuclear submarines “Cheetah” of the 971 project and the Pskov project of the 945A project, as well as the diesel-electric submarine of the Vladikavkaz project of the 877 project, may have been included. But then it turns out five. That is why one submarine, we do not know which one, was excluded from the list of "new" ones.

As for surface warships, there is nothing to say. It’s difficult to judge where two more units came from. Maybe they took a couple of landing or anti-sabotage boats and raised them to the rank of "ships"? But, in any case, in comparison with the December report, the number of surface combat units decreased by half, which indicates some progress in arithmetic.

The 52 ship and auxiliary ship is, of course, the fruit of fantasy, if this number does not include rowboats for naval competitions. Why? They also contribute to maritime practice and help strengthen the health of seafarers.

To begin with, under the auxiliary ships of the Navy, according to Avkentiy Kilesso’s classic work “Ships and ships of the navy”, are meant floating craft designed for “material and technical support of the combat and daily activities of ships and the navy as a whole”. And further: "These vessels, capable of operating in remote theaters, possess the seaworthy qualities of ocean-going vessels." What vessels from the newly replenished navy last year possess such qualities? The aforementioned Yantar, Akademik Kovalev, Igor Belousov, and the modernized Yauza that joined them. There is nothing more to name.

However, last year the Russian Navy was replenished with other recruits - the Dvinitsa-50, Vologda-50 and Kyzyl-60 bulk carriers, bought from Turkish shipowners, and Kazan-60, the former Ukrainian who had passed through the hands of a Mongolian intermediary . All of them have long lifetimes and are designed to work on the Syrian express trains line - for the delivery of military cargo from the Russian Black Sea ports to Tartus, from where the supply of parts of the Air Force of Russia at the Khmeimim airbase comes. According to the testimony of Sevastopol ship repairmen, ships of the "Turkish conscription" - the court, "killed in the trash." Before each flight and after each flight they have to be repaired. And some even come back in tow. Maybe they had in mind among the 52 "new products" of the auxiliary fleet Yuri Borisov?

In recent years, the Russian Navy has been quite actively replenished with road tugs, rescue, diving and hydrographic boats, bunker vessels and floating cranes. But they cannot be counted as auxiliary vessels, since they belong to the basic floating craft. They are intended, again by Kilesso, "to serve ships and ships, as well as other fleet forces in bases, on raids and in harbors." In 2015, the Russian Navy received such basic facilities around 20 that even with the aforementioned auxiliary vessels before the 52 does not hold out.

DETAINED "AT TRANSITION BY SEA"

At an extended meeting of the Collegium of the Ministry of Defense 11 in December last year, Sergei Shoigu said that the fleet at the end of 2015 had received less two surface ships. Yury Borisov corrected his boss, reporting on the delivery of eight ships. In the previous publication “Two to Eight does not stretch in any way”, the author has already named six ships and vessels that were then stuck in shipyards or did not complete the tests: these are the frigates “Admiral Grigorovich”, “Admiral Essen”, “Admiral of the Fleet of the Soviet Union Gorshkov”, corvette “Perfect”, a large landing ship (BDK) “Ivan Gren”, the base minesweeper “Alexander Obukhov” and the logistics support vessel “Elbrus”. What other two units does the Deputy Minister of Defense mean, we simply don’t know and we don’t even guess. Probably something from the number of basic floating equipment ...

In the pursuit of awards

Why do we need annotations, but otherwise this “sliding” data cannot be named in the shipbuilding reports? They appear for a reason. For them, money, bonuses, awards, titles and grades.

Here we can’t help but recall the statement made by the head of the shipbuilding department of the Russian Navy, Captain 1st Rank Vladimir Tryapichnikov, made by him at the Russian Service radio station News"January 16th of this year. “In 2015, we were supposed to get 51 warships, boats and ships, and we practically completed the plan,” he said. “Everything that we have not completed, we will close in the first quarter of 2016.”

We will not pay attention to discrepancies in numbers that do not coincide with the data of the Minister of Defense and his deputy. It seems that the military does not consider it a sin to take data from the ceiling. On the other hand, the optimistic forecast of Vladimir Tryapichnikov regarding the solution of the problem of ship shortages during the first quarter is amazing. After all, who, if not him, know the real state of affairs in shipyards and landfills.

Since then, more than two months have passed. In March 10, the frigate Admiral Grigorovich was transferred to the fleet (it was originally planned to be handed over to the Navy in 2014) - the lead ship of the 11356P / M project, and the next day the Andrew flag was raised. Until the end of March, that is, until the end of the first quarter, the 971 project’s multi-purpose nuclear submarine Kuzbass is expected to return to repair from repair (the ship repairmen solemnly promised the Prime Minister Dmitry Medvedev to return this submarine to the end of December last year). And nothing more.

And who will ask from the official for the remaining ships of the 2015 program of the year that were not given? And who cares? Rebuses and crosswords of domestic shipbuilding can not be deciphered. Meanwhile, the head of the shipbuilding department of the Russian Navy was promoted to the rank of rear admiral, probably for indomitable optimism.

In the light of the above, I can’t believe in Yury Borisov’s statement that the implementation of the 2015 state defense plan of the year as of "January 1 2016 of the year amounted to more than 90%", and "the total result of the endowment of 2015 of the year (taking into account the so-called follow-up charts , that is, the closure of contracts already this year. - AM) - 97% ". After all, besides 6 – 8 warships, according to a report by the same Yuri Borisov, the Russian Armed Forces did not receive 15 aircraft, 17 units of automated control systems, 3 launch vehicle “Rokot” and 1, Breeze booster unit, 253 rocket for various purposes, 240 units of armored weapons and equipment.

But this is not about penny systems, but about products for tens, if not hundreds, billions of rubles. In this regard, one can not forget the sacramental by its absurdity Gogol's Nozdrev saying: “He came, God knows where, I also live here ...”

Ctrl Enter
Noticed oshЫbku Highlight text and press. Ctrl + Enter
We are
Build a fleet, not a surrogateRussia occupies a stable second place in the world market of multi-functional fighters
Military Reviewin Yandex News
Military Reviewin Google News
118 comments
Information
Dear reader, to leave comments on the publication, you must sign in.