Being in service with the US Air Force for almost 60 years, the strategic high-altitude reconnaissance U-2, which received new capabilities in the U-2S version, will continue to be quickly deployed to the strategic air bases of the Allied Air Forces of the NATO and the US Air Forces in Osan (Republic of Korea), Al-Khardje (Saudi Arabia ), Akrotiri (Cyprus), Istra (France). These military objects have such a geographical distribution that each reconnaissance aircraft can reach almost any part of the planet as soon as possible. Considering that most modern long-range anti-aircraft missile systems are capable of hitting targets in near space, the Dragon Lady U-2S will operate only in friendly (defended) airspace, using their qualities as a long-range repeater only due to the large practical ceiling, and, accordingly, the radio horizon

An integral part of the modern theater of war are repeater planes, air command posts, RTR / RER / DRLO planes and ground targeting. The outcome of a regional or global military conflict often depends on the successful accomplishment of communication tasks between various military units, correct targeting of enemy targets, and the correct distribution of tasks at a strategic level. Under the conditions of the current scientific and technical progress, the element base of onboard avionics equipment has undergone serious changes in the direction of miniaturization of microprocessor systems, as well as a significant increase in their performance, storage capacity, as well as an increase in the rate of information exchange with peripheral devices. The resource of their work, noise immunity, as well as the quality of work in the presence of the consequences of a nuclear explosion have increased; working terminals with LCD MFIs have become much easier, and the resolution of displaying information is several times better.

Due to this, for example, radar patrol and guidance aircraft (A-50U, E-3C, "GlobalEye AEW & C" and others), ground target designation (Tu-214R, E-8C) and anti-submarine patrol aircraft (Il-38N, P -8A "Poseidon") have become multipurpose, and can perform not only operations in accordance with the class designation, but also partly are air command posts. This became possible thanks to the additional connected avionics capable of exchanging tactical information with other units in the theater of operations via encrypted high-frequency communication channels of Link-11/16 systems (NATO standard). In principle, such multipurpose fighters as Su-30SM, Su-35S, PAK-FA and the Swedish Gripen-E, where the K-DlAE / UE / S-108 and CDL-39s allow not only to receive a "picture" of the theater of operations from the VKP / AWACS board, but also to transmit between the sides within a link or squadron. In this case, information for transmission can be obtained by optical-electronic / radio-electronic means or by the on-board radar of one of the fighters.

But there are also special highly specialized machines, where, for example, relaying is the main and only function of an airplane in a theater. These include the American E-6A "Hermes" and the domestic Tu-214SR. The first was used as a relay for communication of the US General Staff or VKP E-4B with SSBN / MAPL American fleet. To date, it has been finalized to the Mercury E-6B version and is also involved in the management of the Minuteman III LGM-30G ICBMs, which are part of the 20th Air Force of the US Air Force (Global Attack Command). Russian Tu-214SR - products even more modern, information about them is even less than about the E-6B. It is known that they are intended for communication of the presidential administration with other ground and airborne military targets, as well as for the operational relaying of the collected data on board the president. But if these “air signalmen” are more applicable to ensuring systemic coordination of the strategic link, then the capabilities of the next unit will most widely cover the tactical link, including each ground unit and each soldier equipped with specialized communications equipment. 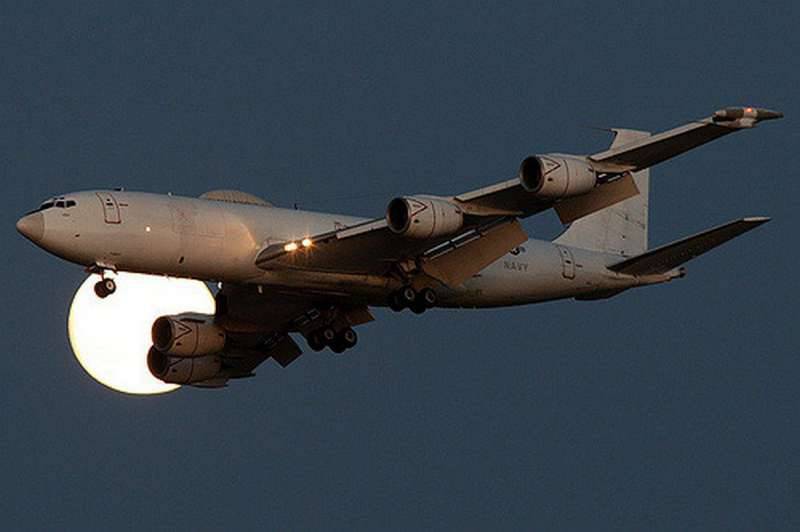 The air command post-repeater and the air command post of the nuclear control of the US Armed Forces E-6B Mercury nuclear triad. Designed for senior officers of the US Armed Forces. Strategic vehicles are modernized E-6A Hermes transponders, and in addition to collecting, amplifying, and distributing communication channels, they are able to directly participate in the management of the ICBM, SLBM, and TFR arsenals in service with the US Air Force and Navy. For communication with strategic missile submarines in the structure of the Mercury antenna complex, a manufactured and towed 7,93-kilometer ADL-range antenna OE-456 / ART-54 and an additional 1,22-kilometer antenna (provided in the extra-long 17-60 kHz range) are provided . They are synchronized with the OG-187 / ART-54 converter amplifier with 0,2 MW power and directly with the AN / ART-54 communication complex. All X-NUMX strategic repeaters E-16A were upgraded by Boeing to the level of the multi-purpose strategic ECP-E-6B for a six-year period (from 6 to 1997 year).

The basic modification (strategic repeater) of the E-6A “Hermes” (photo below) was developed based on the glider of the Boeing 707-320C aircraft and built around the TACAMO concept (“take charge and move out”, in Russian, “took charge and move”) , which is a multi-frequency NATO AF radio communication provided by aerial command posts even during a nuclear conflict. “Hermes” completely replaced the slow and low-altitude turboprop EC-130Q based on the famous “Hercules”. The E-6A also provides two longwave antennas operating at frequencies from 3 to 30 kHz for communication with SSBNs, but without the ability to control ICBMs, since there was no command system ALCS, and 3 higher MIL-STD-1553B interface buses they could connect ADL communication devices with more advanced and productive automated workplaces of operators. Aircraft "Hermes" and "Mercury" can be in the air 16,5 hours without refueling at an altitude of 12 - 13 km. 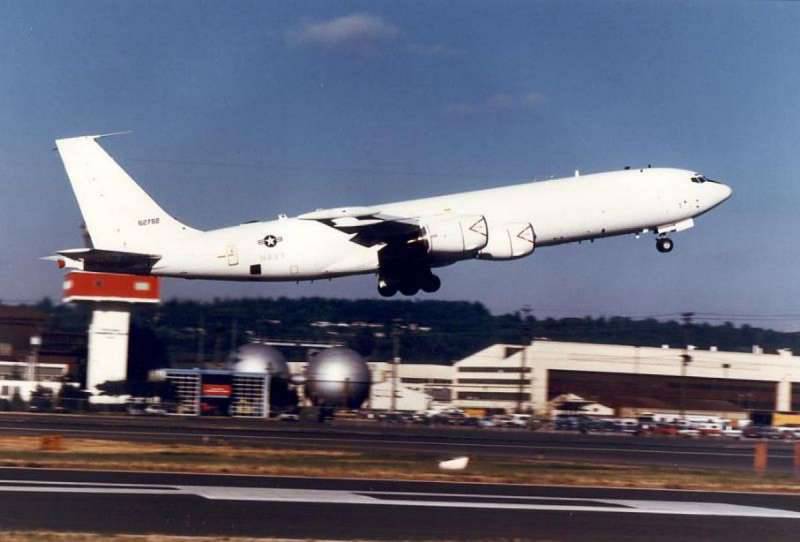 As it became known on March 22, 2016, “Lockheed Martin” intends to extend the life of the high-altitude reconnaissance aircraft U-2S “Dragon Lady” for several more years. U-2 has been in operation for 59 years. These aircraft are still "in the stream" of modern intelligence aviation due to the modernization of optoelectronic systems, as well as due to the excellent altitude and range capabilities, according to which the U-2 continues to remain at the level of the unmanned “Global Hawk”.

Modernization of “Dragon Lady” consists in the installation of modern and light multi-frequency equipment for the retransmission of radio communication channels / data transmission between ground forces, relay satellites, air command posts and command headquarters. Any information can be transmitted (from a video file recorded on a device of any extension to a prepared multimedia or graphic file with information about the tactical situation in a certain area of ​​the battlefield). This U-2S can also be used as an intermediate link in target designation on a theater, saturated with promising long-range air defense systems, where the use of such aircraft as the RC-135V / W is associated with enormous risks for the crew.

His participation is as follows. F-22A "Raptor", successfully used as an unobtrusive reconnaissance aircraft in local conflicts, flies over enemy territory in following the terrain, and, in LPI mode or passive radar, detects all radio sources (ZRSK, RTR radar, etc. .) that are in the lowlands and cannot be detected by remote aerial reconnaissance means such as E-3A or “Rivet Joint”. The coordinates of the targets from the Raptor are transmitted to the U-2S “Dragon Lady” repeater, which is exactly 2 times higher than any aircraft of similar designation, and from its side, the target information is sent to the F-16C or B-1B, which then start According to the enemy’s air defense, reconnoitered by Raptor, dozens of airborne AGM-158B “JASSM-ER” can participate in an MRAU.

Thanks to the U-2S practical ceiling equal to 21,5 km and the dynamic 26,5 km, the stratospheric repeater has just a huge radio horizon, which is calculated using a simple formula (D = 4,12 √h1 + √h2, where h1 is the height of the antenna of the retransmission, ранhNNXX + √h2, where h22000 is the height of the antenna of the retransmission, it is retransmission, it is inc. height of the carrier serviced by the repeater of communication equipment). For example, if the “Dragon Lady” flies at an altitude of 30 m, and the ground vehicles associated with it are at an altitude of 635 meters above sea level in an open area not covered by large elevations, then the radio horizon will in this case be 6 km, for E- The 475A radio horizon does not exceed 2 km. To maintain a normal ground tactical link with the command, the high-altitude U-500S is not forced to approach the enemy as closely as Hermes. This ability not only reduces the chances of being intercepted by ground or air defense systems, but also allows you to maintain communication with ground special forces, which can be located more than XNUMX km in the rear of the enemy. 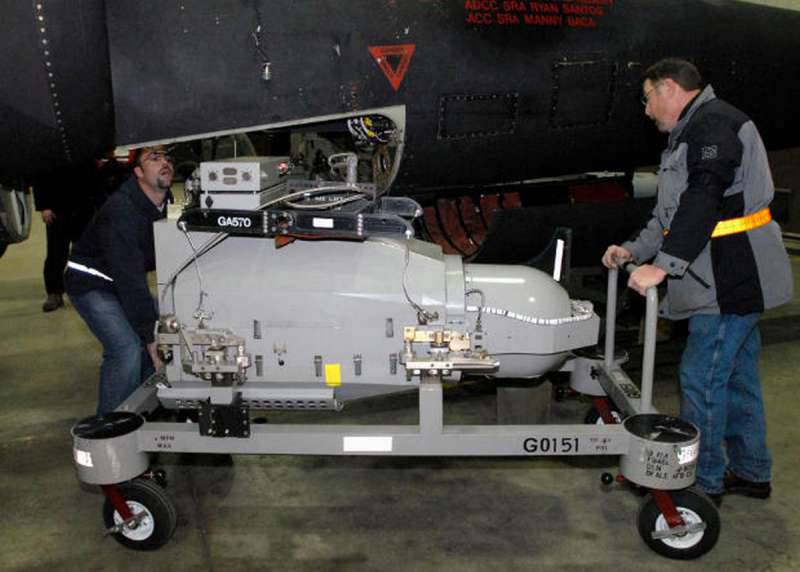 Improved U-2S "Dragon Lady" equipped with a new turbojet twin-engine F118-GE-101 with increased to 8625 kgf thrust; the same is installed on the B-2 “Spirit” low-profile strategic bombers, so the placement of light electronic equipment had practically no effect on LTH, and U-2S is also able to carry the optional OPERS-electronic equipment SYERS-2B / C and OBC for conducting high-altitude aerial survey with the possibility further data retransmission to other means.

All strategic capabilities of the U-2S regarding flight range are kept at the level of other aircraft modifications. Its range of action is 10300 km and enables the 10-12 hourly stay in the air. After 2020, U-2S will be completely replaced with strategic drones - RQ-4B and MQ-4C "Triton" (Navy version), until this time 32 "Dragon Lady" will continue to participate in building the network-centric capabilities of the US Armed Forces, it appears in the sky over the regions of maximum military and political tensions.