March 25 2016
39
The year 1944 was the most fruitful for the Red Army in terms of equipping its units with new anti-tank self-propelled guns. Although the nomenclature of self-propelled guns manufactured in the Soviet Union was relatively small, especially in comparison with Germany, the power of the SU-100, which was armed with a 100-mm gun, was sufficient to deal with most German tanks at a distance of up to two kilometers, exceptions could be made only by the Jagdtiger tank destroyer and the experienced super-heavy Maus tank.


However, progress is not standing still, and armor confrontation and waiting for the next round of the projectile, and the self-propelled gun SU-100 had a number of obvious design flaws. Eliminate them could only complete processing of the combat vehicle. Most of the claims were caused by two parameters: the outdated self-propelled transmission and the excessive removal of the barrel for the dimensions of the body of a combat vehicle.

In general, the further improvement of the firepower of the Soviet self-propelled guns were raised after adopting ACS SU-100. The base of the T-34-85 tank, existing at that time, did not allow designers to use the newest long-barreled tools because of the heavy overload of the road wheels, low warranty mileage and the above-mentioned large cannon removal for self-propelled dimensions. For the artillery installations of the new generation, a new base was needed, which would have been deprived of the shortcomings that were already in use by the machines. Therefore, the question of creating a new anti-tank SAU was inextricably linked with the creation of new tanks, which were to replace the T-34. 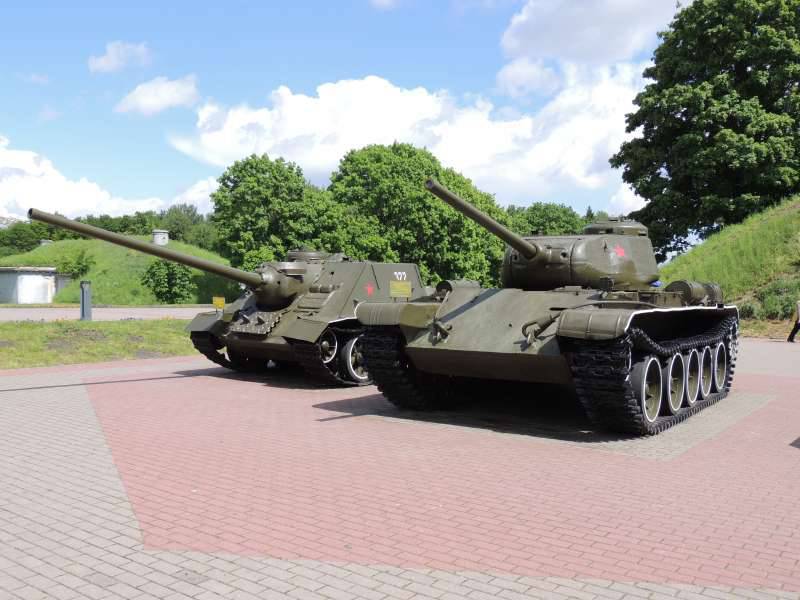 Above the development of a new medium tank in the USSR, they were already thinking in 1942 year. In KB Kharkov plant number 183, which moved to the Urals and located on the square Nizhny Tagil plant Uralvagonzavod, in 1942 year, began work on a new medium tank, received an index of T-43. It differed from the legendary "thirty-four" new spacious three-seat turret with a significantly improved booking, on which they placed the commander's turret, as well as the transition to a torsion bar suspension. Significantly increased and body armor. The forehead of the hull was defended by armor 75 mm thick, the sides - 60 mm. In the usual T-34, the thickness of the upper frontal part was 45 mm. The development of the new medium tank was personally led by the chief designer of the enterprise A. A. Morozov. But still this war machine, which exceeded the T-34 in everything, did not go to the series. If the tank began to change in the production in wartime total production of medium tanks in the USSR would have dipped significantly, and that the Soviet leadership could not afford.

The development and conduct of a deep modernization of an existing T-34 tank was chosen. The modernization of this combat vehicle led to the replacement of its turret by the turret from the T-43 tank, as a result of which an almost new T-34-85 tank appeared. But A. Morozov did not intend to abandon the idea of ​​developing a new medium tank. Therefore, at the end of 1943, the development of the tank began, which received the T-44 index. This war machine was further developed by the tower tank T-43 and T-34-85, but the body has undergone drastic changes. One of the most advanced solutions for developers was to place the B-44 engine transversely. Thanks to this, it was possible to significantly reduce the length and height of the hull, and due to the released weight, strengthen the booking of the combat vehicle. Due to the transverse engine is not only able to reduce the length of the tank on the MTO 650 mm, but also to increase the volume of its crew compartment and move the tower closer to the center of the housing.

On top of that, a new 44-speed gearbox was installed on the T-5, which turned out to be compact and light, thanks to the use of “guitars” in the transmission design (this name was invented for the gearbox with 0,7 transmission ratio, it reduced the number of revolutions and load at the checkpoint). And through the use of new fuel equipment, it was possible to increase the nominal power of the diesel engine from 500 to 520 hp.

The fundamental difference between the new tank was the refusal of the Christie suspension; the T-44 had a torsion bar suspension. Spring "candles" Christie took away too much of the reserved space, while possessing a positive feature - the crew had less difficulty in carrying out repairs. At the same time the use of torsion bar suspension has reduced the size of a medium tank, improve crew habitability conditions and reduce the cost of the process of production combat vehicle. In general, in comparison with the T-34-85, the new T-44 tank became twice as secure, retaining the same combat mass, more mobile and retaining its firepower. Seriously increased the convenience of the crew.

In parallel with the work on improving the existing and developing new medium tanks in the Soviet design bureaus, they also worked on projects of other combat vehicles. Thus, the design team of the Ural Transport Engineering Plant located in Sverdlovsk specialized in the development of medium-sized self-propelled artillery systems for various purposes. These works were led by the famous designer Lev Izrailevich Gorlitsky, who in 1932 turned out to be one of the first graduates of the Leningrad Military Mechanical Institute. He managed to get through the millstones of repression, in August 1940 was released and headed the artillery KB of the Kirov factory in Leningrad. After the beginning of the war, this design bureau was evacuated separately from the tank factory and was not placed in Chelyabinsk, but in Sverdlovsk, where Gorlitsky was engaged in designing the ACS, being the head of the Special Design Bureau.

By the autumn of 1944, in Sverdlovsk, on the basis of the chassis of the medium T-34 tank, such well-known SAUs were widely used during the Great Patriotic War as the SU-122, SU-85 and SU-100. In addition to these combat vehicles, SKB engineers worked on projects and other self-propelled guns, which, however, did not become so well known. From June to October 1944, a number of projects of self-propelled artillery installations were created at the Ural Transport Engineering Plant with the potential for subsequent modernization and improvement of performance, as well as taking into account the shortcomings that existed in previous combat vehicles. Some of them were built on the chassis of the new medium tank T-44. 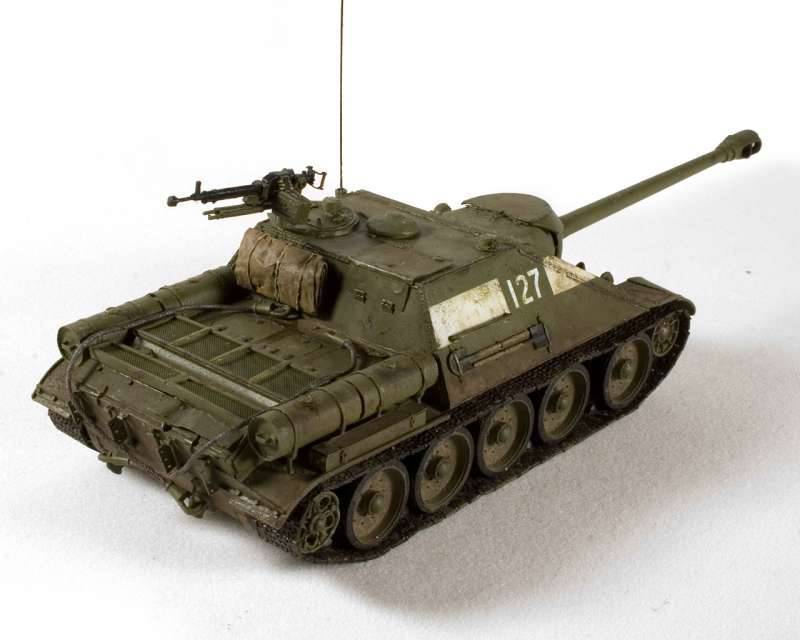 In October, the plant presented to the Technical Council of the People's Commissariat of the Tank Industry 1944 projects of new SAUs at once:

According to the decision of the technical council, the best projects presented were SU-100-M-2 and SU-122-44 self-propelled guns. Therefore, by order of the People's Commissar of Tank Industry No. 625 from October 26 1944, UZTM was asked to complete the design of the self-propelled gun data, as well as complete the drawings and produce prototypes of combat vehicles. At the same time, the SU-100-M-2 self-propelled gun was named “Uralmash”, and the SU-122-44 had the working name “Thunder”. Apparently, such a requirement on the construction of two different prototypes carried a hidden desire to be safe in the event of failure of construction of the "Soviet Ferdinand." It was this German combat vehicle that was largely responsible for designing self-propelled self-propelled vehicles with rear felling in the USSR. At the same time, on each of the self-propelled guns, the installation of two different tools — the 100-mm D-10 and the more powerful 122-mm D-25 — was worked out. Accordingly, the prototypes of combat vehicles were named "Uralmash-1" (SU-101), "Uralmash-2" (SU-102) and "Thunder-1" (SU-100-44) and "Thunder-2" (SU-122 -44).

The SU-122-44 self-propelled gun was designed on the basis of the T-44 medium tank. In the front part of the house there was a deckhouse with a fighting compartment. As the main armament was planned to use 122-mm rifled gun D-25, which was already used on the tank EC-2. The 7,62-mm DT machine gun, which was paired with the gun, was to be the additional armament of the combat vehicle. When shooting at direct fire, the TS-17 sight was used, for firing from closed positions it was planned to use the M-30 panoramic sight. The frontal booking of self-propelled guns was the same as that of the T-44 - 90 mm. The estimated weight of the combat vehicle with the 122-mm gun was up to 35 tons. With about three tons greater than the mass of the T-44 tank, given this circumstance, it was planned that the speed of the SAU would be slightly lower than that of the average tank, but would remain comparable.

However, the project of this self-propelled gun was never implemented in the metal. As early as December of 1944, as part of the continuation of work on the SU-122-44 project, it turned out that the dimensions and mass of the combat vehicle are too large. Mainly due to the five-meter barrel of the D-25C. At the same time, the SU-100-M-2 self-propelled gun with a rear combat compartment was quite compact, its length was sharply reduced, and the weight fit into the middle class machines, while the reservation was significantly strengthened. Based on these findings, it was decided to continue the work only on the project SU-100-M-2, and all work on the self-propelled SU-122-44 to roll, the corresponding order from the NKTP was received 7 March 1945.

Performance characteristics of the SU-122-44: 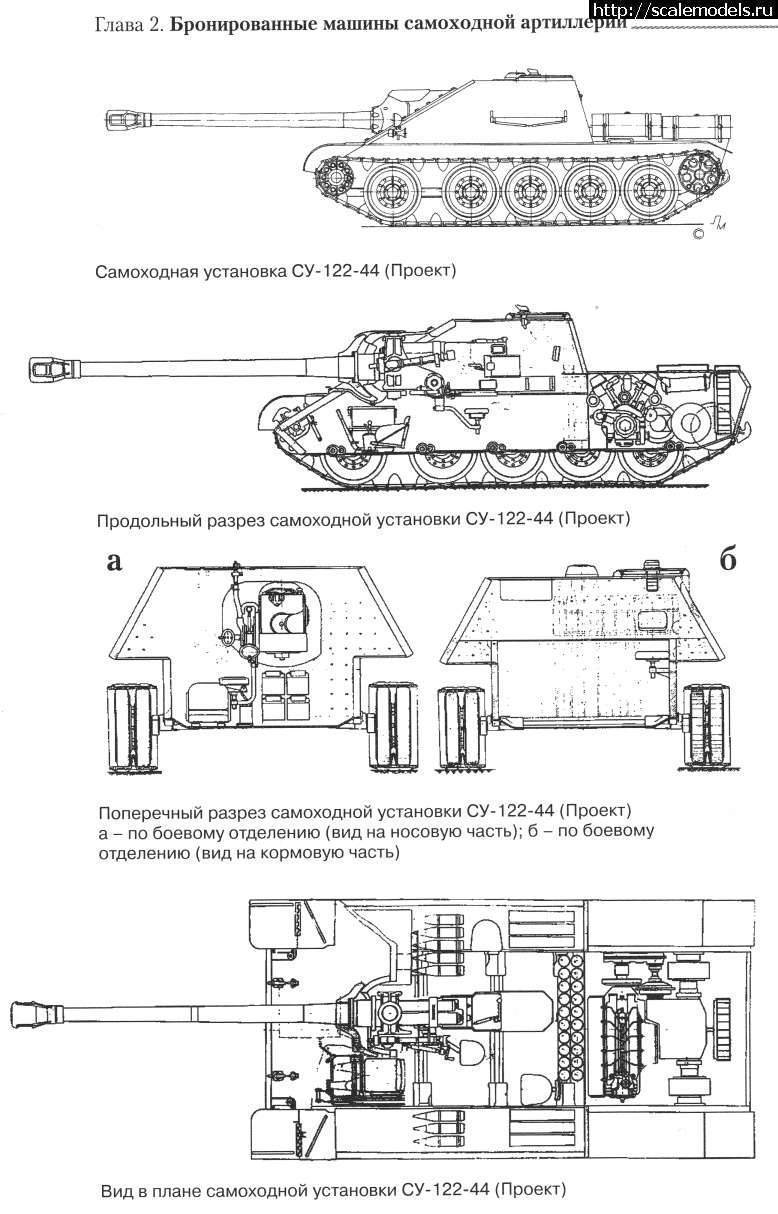