Russian Navy of the XXI century: promising ships and weapons

March 27 2016
34
The end of 2015 - the beginning of 2016 was marked by an unprecedented number of announcements of promising naval weapons from representatives of the defense industrial complex and naval commanders of the Russian Federation. FlotProm collected in one piece everything that is known about the planned appearance of the Russian Navy fleet sample of the XXI century.

The closest to implementation is the project of a non-nuclear submarine with an anaerobic power plant, which allows to significantly increase the time the ship stays under water. The development of an air-independent engine in Russia is being carried out by the Rubin Design Bureau, which has already reported on the successful testing of the installation at the coastal stand. Marine tests are scheduled for 2016 year, and the development work on the construction of the submarine, capable of up to 3 weeks not to rise to the surface, on the 2017 year. The total number of promising submarines of the project "Kalina" will be determined by the still not adopted state armaments program until the 2025 year. 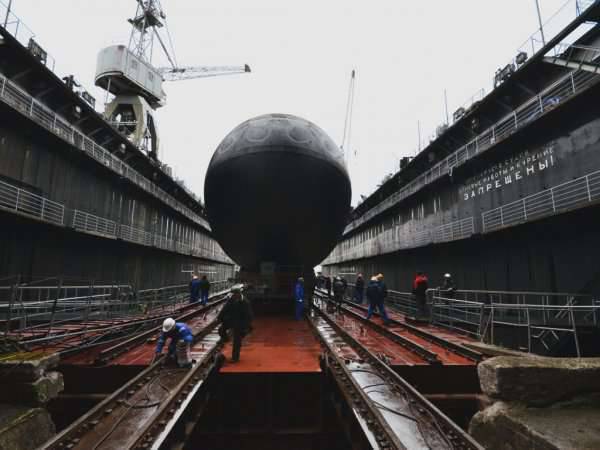 In nuclear submarine shipbuilding in the foreseeable future, changes are not expected. Until 2020, the Severodvinsk shipyard "Sevmash" will continue the construction of multi-purpose nuclear submarines of the project "Yasen-M" and strategic missile carriers "Borey-A". Against this background, the Navy has just begun to form a tactical-technical assignment for the fifth generation nuclear-powered icebreaker, which will receive the Husky cipher. About the new submarine little is known: it will be multi-purpose and will receive hypersonic anti-ship missiles. In addition, the fifth generation of Russian submarines can be replenished with anti-submarine hunter submarines. According to open documentation on re-equipment of production capacities, it is planned to build fifth-generation submarines - as well as modern nuclear-powered ships - on the Sevmash. 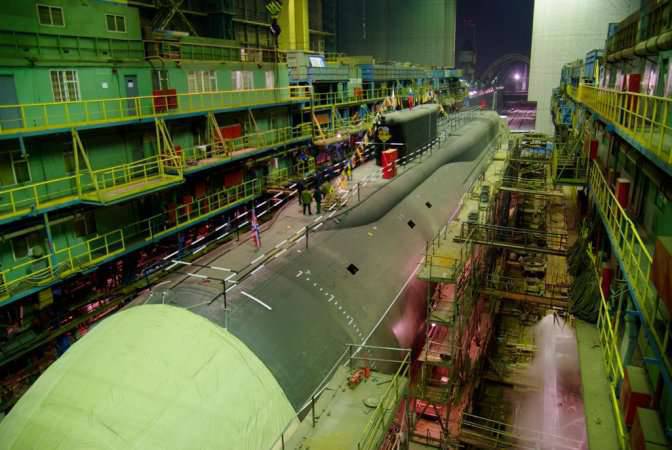 The submarines of the future are planned to be designed taking into account the active use of composite materials that can reduce the vibration and noise of the ship. Speech about the manufacture of composite shells is not yet in progress - the metal will be replaced in the manufacture of exterior coatings, steering wheels, stabilizers, screws and other external elements.

When talking about the prospects of the submarine fleet, much attention is paid to reducing the crew size. On modern ships there are about a hundred people on board - in the future, their number is expected to be reduced to 30-40 due to the introduction of management automation tools. 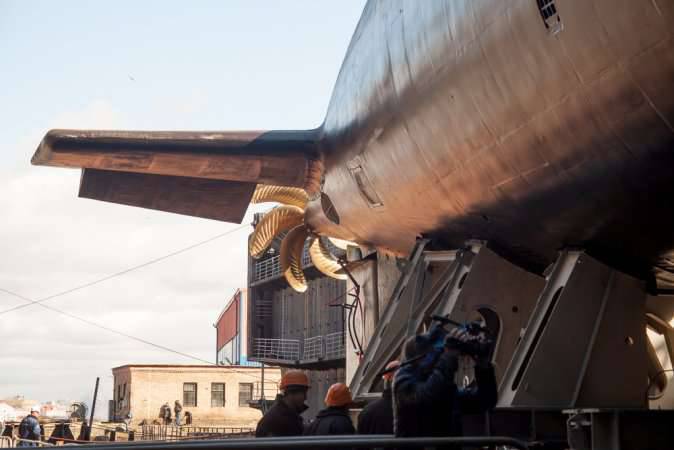 A separate representative of the submarine forces of the future Navy is the ocean multi-purpose system "Status-6", information about which became well known after the presidential meeting in November 2015. The impact force of this system is a self-propelled underwater vehicle with a range of 10 thousands of kilometers and a depth of one kilometer, designed to destroy the coastal infrastructure of the enemy. They should be armed with nuclear submarines of the 09852 "Belgorod" and 09851 "Khabarovsk" projects, the first of which is being rebuilt into a special purpose submarine from a carrier of cruise missiles, and the second is being built from scratch. Both ships are on the stocks of Severodvinsk "Sevmash".

Prospects for the surface fleet of Russia, according to statements by informed naval officials, are seen as less ambitious and are aimed primarily at the withdrawal of the Russian Navy in the ocean zone. The engine of this process should be the new destroyers of the project 23560 "Leader", the construction of a series of which will be included in the state armament program 2018-2025. In the open press, only the characteristics of the ship's pre-sketch model developed by the Northern PKB were published. It was assumed that he would be the carrier of more than 200 missiles for various purposes and will receive a hull with a displacement of 18 thousand tons, which is more than twice the same characteristic of the Soviet destroyers of the 956 Sarych project. The power plant of the ship will be atomic. 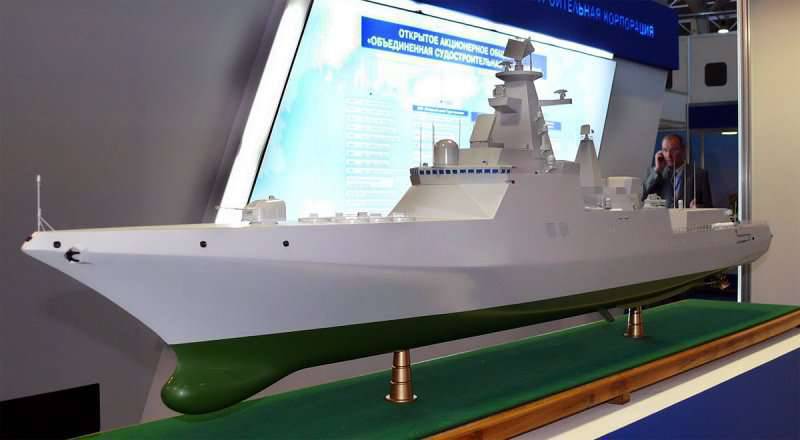 Model of one of the variants of the project destroyer "Leader"
militaryrussia.ru

The atomic heart of the "Leader" is planned to be unified with the power plant of another promising Russian development - the aircraft carrier "Storm". During its construction, it is planned to combine two schools to create ships of a similar class - domestic and western. For example, the rise in the air wing will be provided as a runway with jumps, and an electromagnetic catapult. This will maintain a balance between the need to ensure take-off speed of heavy aircraft, such as airborne airborne warning systems (long-range radar detection and control), and the flight speed of the aircraft. Put on board the aircraft carrier planned at least 80 aircraft and helicopters. The laying of a new ship is supposed to be carried out not earlier than 2025 of the year at Sevmash, the only Russian enterprise capable of building marine equipment with a length of about 300 meters. 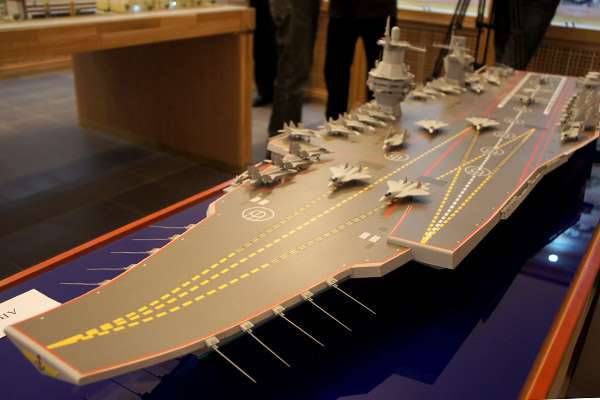 The helicopter carrier of domestic production should become the third ship of the future in the Russian Navy, even the beginning of the design of which led to a wave of arguments about the imminent replacement of the Mistral sanctioned ones. At the military exhibitions held in the summer of 2015, the experts of the Nevsky PKB showed their mock-up of a ship of this class "Surf", and at the neighboring stand, scientists of the Krylov Center showed everyone the mock-helicopter carrier "Avalanche". Nevertheless, the Navy gave an unequivocal answer - before 2017, the task of building the shipyards would not be assigned. 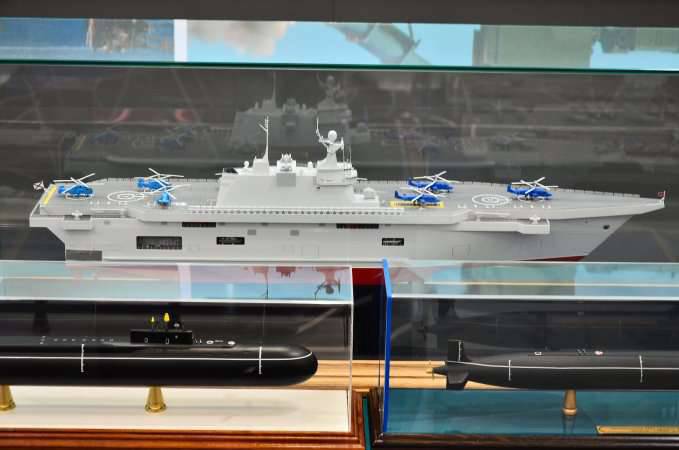 Separate attention in the context of surface shipbuilding is deserved by the statement of the head of the United Shipbuilding Corporation, Alexey Rakhmanov, about the introduction of an electric propulsion system when designing new types of marine technology. Now it is mainly used on auxiliary fleet vessels and icebreakers, but in the future it should be introduced on all warships. Its principle is based on the rotation of the propeller by electric motors, the energy for which will be generated by the main power plant. This allows a freer layout of the ship in terms of location of the latter and significantly increases the maneuverability of the ship.
Armaments

Oddly enough, in the context of offshore armaments, the project is not closest to the implementation of the project is not offensive, but defensive weapons. We are talking about anti-torpedoes for submarines, which will allow Russian submarines to gain an advantage in dueling situations. Today, the Package-NK system was created only in the version for surface ships, however, the general director of the Admiralty Shipyards announced the appearance of anti-torpedoes on diesel-electric submarines under construction. 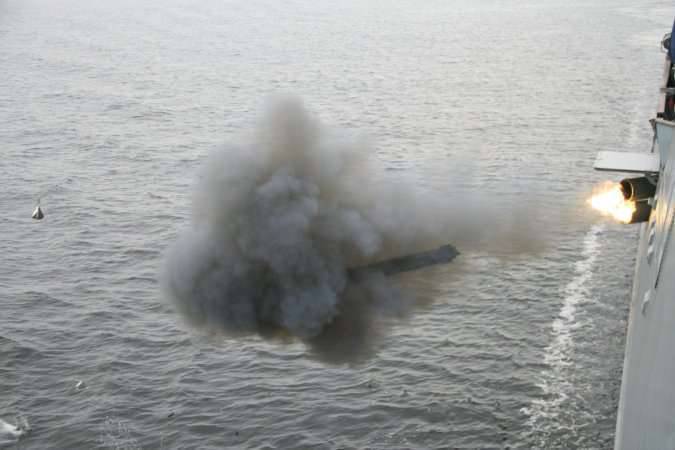 The next upgrade point of the Navy’s arsenal should be a modernized version of the Bulava ballistic missile, on which specialists of the Maritime Institute of Thermal Engineering are working. The need to upgrade the main weapons of underwater strategists is due to the fact that "fundamentally new design and design solutions are emerging, the meaning of which is to increase the effectiveness of the use of weapons." Among other things, it is planned that the new "Bulava" will become less expensive.

The development also expects a complex of Caliber cruise missiles, the capabilities of which were demonstrated to the world during the Russian operation in Syria. According to the latest statements of the Navy command, they will be installed on the multipurpose nuclear submarines of the 971 project. 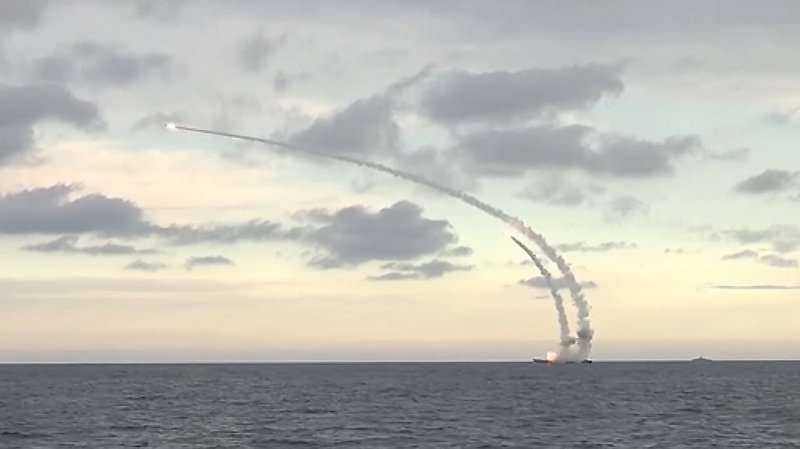 Volley "Caliber"
Other promising cruise missiles, known as the Zircon, will not be as multifunctional as the Gauges. This complex should replace the Soviet Granit missiles and will be designed exclusively for anti-ship purposes. The main advantage of the Zircon will be the ability to fly at hypersonic speed in 5-6 Max (Mach number indicates the speed of sound - Ed.). They will be armed with promising submarines of the 5 th generation of the Husky, the destroyers Leader and the upgraded atomic cruisers of the 1144 Orlan project. Tests "Zircon" in Russia have already begun, but the timing of the launch of rockets into service has not yet been called.

One of the most recent and intriguing statements was the mention by the Deputy Commander-in-Chief of the Navy, Viktor Bursuk, of technologies with the help of which in the future submarines will be able to strike at space objects. The vice-admiral did not disclose any details to journalists, however, he stressed that they would be one of the priority areas for the development of naval armaments.