From officers to conspirators


27 February 1917 of the year after the manifesto on the dissolution of the Duma of the deputies of opposition views was formed by the Provisional Committee. He announced that he was taking into his own hands the restoration of state and public order, and expressed confidence that the army would help in the difficult task of creating a new government. The hope of the Chairman of the Duma, M.V. Rodzianko, who signed this appeal, was justified by the military.

Some military commanders closest to the Supreme Commander for official position — the elite of the army, having broken the oath, supported the Provisional Committee. Perhaps then they did not represent the scale of the catastrophe that would befall - primarily through their fault - the entire officer corps of the Russian Imperial Army.

Even some members of the dynasty hastened to salute the Provisional Committee. March 1, Grand Duke Kirill Vladimirovich with his subordinate Guards naval the crew reports to Rodzianko about their readiness to be at his disposal. The Chief of Staff of the Supreme Commander-in-Chief, General M. V. Alekseev, did not show loyalty to the sovereign (for more details, see “Orange Technologies of the February Revolution”). 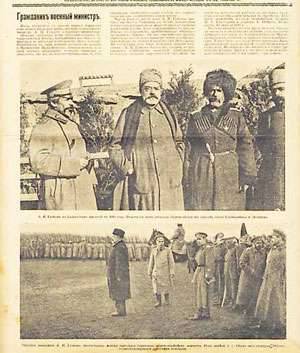 The path chosen by the higher ranks for the salvation of the army — treason against the sovereign and the commander-in-chief led to the end of this army. They began to bring him closer with the release of Order No. 1 by the Petrograd Soviet, which undermined the fundamental principle of military discipline — unity of command. The order addressed to the troops of the Moscow garrison became the property of the whole army and caused a previously unheard-of decomposition of the troops.

Having lost the supreme leader, the army received from the Provisional Government a new, mockingly defamatory name — the Revolutionary Army of Free Russia, which quickly lost its sense of continuing the war, and no rulers could save it from collapse. Most of all it affected the officers. The cleaning of personnel, detentions, arrests, mob lawsuits and shootings of gold miners became common. Only in the Baltic Fleet by mid-March 1917, more than 100 people were killed.

The officers tried to somehow save the army and themselves by creating public organizations as an alternative to the soldiers' committees, romantically supporting the political slogans of freedom, equality, fraternity and expressing confidence in the Provisional Government, but it acted with caution on the political preferences of the Soviets, and the soldiers did not show readiness to be with former gentlemen. This was shown by the failure of the idea of ​​creating an organization called upon to restore the destroyed unity, the "All-Union Union."

The democratization of the army, coupled with the lack of success at the front, led it to decomposition, and the officer corps to death. By order of the temporary military and naval minister A. I. Guchkov No. 150 of April 21 of 1917, naval officers were deprived of epaulets. They were replaced with the insignia of distinction.

From smokers to Decembrists

Everything that happened testified to a deep spiritual and moral crisis among officers. Since the time of Peter I, the Russian nobility was under the ideological influence of the West. By the beginning of the XIX century in the average lordly library there were 70 percent of the literature of French authors. The nobles themselves not only spoke, but also thought in a foreign language. The Decembrists, for example, testified in French during the trial. The misunderstanding between the highest class of society and the people who continued to keep traditions grew.

The moral beginning of the military oath of allegiance, which became a formality that could not be observed for certain purposes, was gradually lost. One of the reasons for this is the abolition by Peter I of the ancient custom of transferring the royal throne to direct descendants through the male line, which caused constant revolutionary ferment in the upper echelons of power and the army during the next shift of the king. The nobility coups entailed a violation of the oath, weakened and shook the foundations of the monarchy.

In 1725, with the accession of the Russian throne with the help of the first foreigner's guard, Catherine I, the Supreme Privy Council was formed, which limited the power of the Empress so that no of her decrees could come out until they "took place" in this 18th century politburo. The next action to weaken the monarchy was the “conditions” developed by the Supreme Privy Council in 1730, which seriously limited the authority of the monarch, reducing them to representative functions. But this time the "constitutional monarchy" lasted only a few days. Most of the nobility and the guard was not ready to support such a reform.

While in the 1725 and 1730 coups, the officers involved in them did not violate the oath, then in the two subsequent years they already went to perjury, overthrowing the baby Emperor John VI in favor of Peter I’s daughter Elizabeth and in 1741 –– Peter III for the accession of his wife Catherine.

For many years of the monarchs' rule, erected by the upper layer of the nobility, it was corrupted by its leading position in the coups. And it was assured that the fate of the emperors in his will, because the conspirators did not receive punishment for their oath to the perpetrators, but regular freedoms and signs of gratitude, given with the expectation of future loyalty bestowed. The discipline of the guard officers fell, they turned into idle, spoiled by the luxury of dandies, who were only listed as regiments, and instead of combat training and order, they preferred haunting.

Participation in palace coups made a corrupted caste of sovereign servants - the kings paid officers for loyalty.

Paul is not a decree

An important step for the termination of these iniquities was made by Paul I, restoring the previous procedure for transferring royal power and taking measures to strengthen military discipline. In order to raise the significance of the military oath to the proper moral height, he personally was solemnly encouraged by conferring military ranks to Major General inclusive and retired Prime Minister Abramov, who was retired by Anninsky ribbon, refused to swear allegiance to Catherine II, remaining loyal to the former Emperor Peter III. 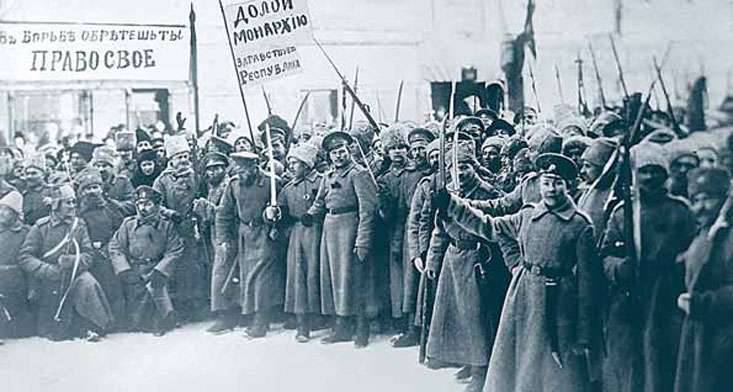 This moral lesson has long been the subject of discussion in society, and yet the highest dignitaries and guards did not learn it. Having lost the opportunity to influence the choice of the rulers and not having time to wean the former liberties, they once again changed them, staining their uniforms with the villainous murder of the emperor.

For the military noble 14 coup of December 1825, an interregnum was chosen to create at least the appearance of non-violation of the oath. However, it looked like this for the majority of conspirators who did not know the true state of affairs. The organizers, who were members of secret societies, knew that their activities were anti-state in nature, but they took on other obligations that they put above national ones.

In 1917, the generals did not take another oath, but at the decisive moment they did not firmly declare support for the sovereign. And very soon, for their infidelity, they felt the “gratitude” of the temporary and long-time leaders, as well as the liberated people and the soldiers' masses, who had come out of obedience.

Calculated as a servant

The commander-in-chief of the armies of the Western Front, General A. E. Evert, who made his choice after hesitation, realized his guilt: "I, like other commanders-in-chief, betrayed the king, and for this atrocity we all have to pay with our lives."

Four of the eight top army officials paid dearly. The first was the commander of the imperial Baltic fleet, Vice-Admiral A. I. Nepenin, who, on his own initiative, sent a telegram to the Tsar on March 1 with a request to support the demand of the State Duma, and 4 was already arrested by revolutionary sailors for not wanting to hand over the case commander, and shot in the back.

Vice-Admiral A.V. Kolchak, who headed the Black Sea Fleet, did not leave a written testimony indicating his infidelity to the oath, but having all the information about the opinions of the commanders-in-chiefs of the front-line armies, he did not say anything and expressed his support for the sovereign. Arrested already as a former supreme ruler, giving evidence to the investigation, he said that he fully welcomed the fact of the transfer of power to the State Duma. So his silence can be considered as solidarity with the opinion of the top military leaders of the army and navy. On the night of February 7 1920, Kolchak was shot.

The most tragic was the fate of the commander-in-chief of the armies of the Northern front, General N. V. Ruzsky. Having made an offer during personal contact with the tsar in Pskov to surrender to the winners (for more information, see The Chronicle of High Treason), the general lost the forgiveness of Nicholas II. In October, 1918 in the number of hostages he was hacked to the Pyatigorsk cemetery.

In August, 1920 was shot in Crimea by the “green” 1917-th dismissed in April and retired assistant to the commander-in-chief of the armies of the Romanian front, General V.V. Sakharov.

MV Alekseev was entrusted to lead the revolutionary army, which provided support to the Provisional Committee and immediately after the sovereign left the Stavka who swore allegiance to the new government. Feeding illusions about the salvation of the army, he tried to do it, but did not get the understanding and support of amateurs from the Provisional Government. Soon after his appointment, realizing the futility of his efforts, the commander-in-chief frankly spoke at the constituent assembly of the Union of Officers being created: “The military spirit of the Russian army fell. Just yesterday, menacing and powerful, she now stands in some kind of fatal impotence before the enemy. ” The next revolutionary commander-in-chief, A. A. Brusilov, gave a similar assessment. In his memoirs, he admitted that by May 1917, the troops of all fronts had completely gone from obedience and it was impossible to take any measures.

The words of two military leaders who saw the salvation of the army and Russia in the abdication of the sovereign, but were unable to do it without him, became a moral sentence for infidelity. The new government no longer needed their services, and therefore "calculated it as a servant," Alekseev said bitterly about his resignation. With Brusilov, temporary workers also did not stand on ceremony. Glavkovver and could not show his military talent in the onset of June 1917, which undermined his credibility. Therefore, it remained in stories only as a hero of the Brusilov breakthrough, awarded and marked by those who, in a difficult moment, refused to be faithful.

Ctrl Enter
Noticed oshЫbku Highlight text and press. Ctrl + Enter
We are
From the history of own names of aircraft of Russia, 1885-1917 yearsInsignia ranks of the Russian Army. XIX-XX century
Military Reviewin Yandex News
Military Reviewin Google News
29 comments
Information
Dear reader, to leave comments on the publication, you must sign in.