Verdict to Radovan Karadzic. There would be a Serb, and there will be an article in The Hague


Therefore:
It was a parody of justice!

Therefore:
This is the shameful judgment of the Washington hangers-on!

Therefore:
The sentence to Karadzic is a consequence of the madness of Europe and the end of the concept of "European justice"!

And after all, we will be right a thousand times, since this is indeed a judgment seat and a parody of the justice system, if only because Karadzic didn’t do even a percentage of what those who started in his attitude, first military, then political, and and pseudo-persecution. We'll be right a thousand times, because the Hague Tribunal itself has long become a synonym for engagement and a tool for settling US accounts with those who once crossed their path, standing to death for their land and their people.

So, the ICTY (International Tribunal for the Former Yugoslavia) was sentenced against 70-year-old Radovan Karadzic, the first president of the Republika Srpska. South Korean judge O Gon Kvon “persecuted” such that any person familiar with the letter of criminal law is able to precipitate. In the process of the “multi-letter” verdict, Gon Kwon actually recognized Karadzic as guilty of why the individual presidents of the United States received the Nobel Peace Prizes ... And here even the term “double standards” fit very naively, because any double standards have at least some then the boundaries, but what they created in the ICTY does not have any boundaries (and especially reasonable ones). The verdict of the South Korean judge, during the trial (since 2009), who learned how to pronounce the name of the defendant and, probably, no more than diagonally acquainted with the events that Radovan Karadzic participated in, was 40 years imprisonment! .. 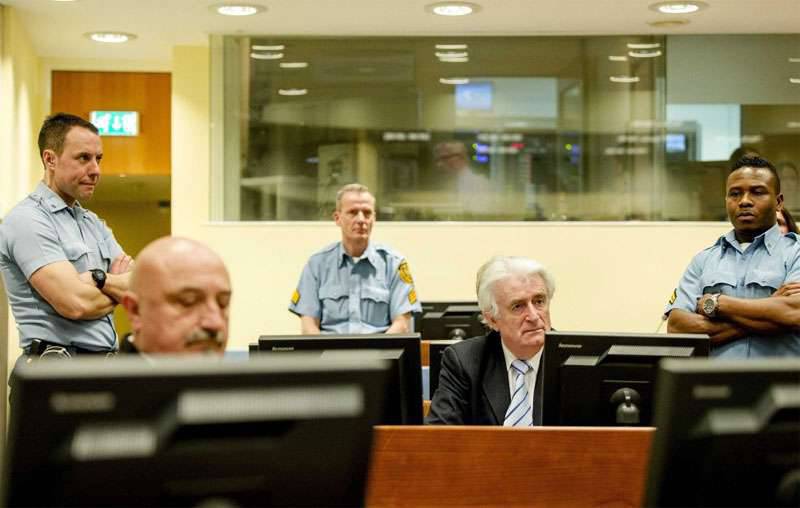 According to Judge Gon, who (the opinion) is supposed to be shared with the judge by “responsible persons” from across the ocean, Karadzic is guilty of “killing and forcibly resetting civilians during the civil war in Bosnia and Herzegovina in 1992-1995”. Yes, yes, you heard right - the phrase "civil war" from the mouth of the ICTY judge sounded. In other words, the Hague Tribunal confirms the precedent created by itself - in any civil war, a third party is free to identify the perpetrators. And in fact any civil war should be a tribunal, which will identify the perpetrators. Hear, Mr. Turchinov, Mr. Yatsenyuk, Mr. Poroshenko ... Reveal! And dry ...

Gon revealed, and others will reveal. There is a precedent, and whether those who created the precedent themselves want it or not, they will also benefit from the provoked civil war in Ukraine.

The court in The Hague ruled that Radovan Karadzic was also guilty of the killings in Srebrenica, where, according to "witnesses", as many as 8 of thousands of Muslims were killed. And, of course, every single Karadzic was killed either personally or through an order ...

But how did it happen that Mr. Gon Kwon did not get acquainted with the statements of Radovan Karadzic from 1993 of the year, when he in Greece and Austria spoke about the political program for the restoration of Yugoslavia to maintain balance in Europe.

Here is the statement of Karadzic, which is even, surprisingly, on Wikipedia:
We never lived in the state of Bosnia, we lived in the Yugoslav Republic of Bosnia. Feel the difference? And today we don’t want to be part of the non-existent state of Serbia, we just want to maintain our indissoluble link with the Serbian people (...)

And this is not fanaticism, although our position irritates the world community, the Bosnian nation does not exist. Bosnia is a common home for three fraternal peoples. And we know Muslims and Croats a little better than the insidious foreign journalists who come to Bosnia for a few days.

That is why we have the right to ask Muslims and Croats a few questions: do we, the Serbs, have no right to distrust you, given your track record during the Second World War? Do you really think that we, the Serbs, will accept the dismemberment of Yugoslavia and the violent division of the Serbian nation? ...

The Muslims of Bosnia are our Slavic brothers. They suffer from their gullibility. Their leaders deceived the Muslims, promising them paradise beyond Yugoslavia. Bosnia can be restored only as a federal state, which at a certain stage will join the renewed Yugoslavia. Our common future cannot be imposed from outside, much less by force. weapons. Only to us - Serbs, Muslims, Croats - on the shoulder during the peace negotiations, having forgotten the strife, to define our common future ...

How does this platform of Karadzic generally fit in with the fact that "by his order they slaughtered women and children (Bosnian Muslims) in Srebrenica"? This, at least, is nonsense, and, more precisely, an obvious attempt to hide the obvious facts behind a heap of lies that did not fit into the fabric of accusation.

There is no Yugoslavia, and there is no European balance about which Radovan Karadzic spoke about 23 a year ago. Europe is in the process of "half-life", bombarded by "fast particles." And what this element, which turned out to be very unstable, will turn into an element - only God knows. Against this background, in The Hague they decided to convict a man who tried to save Europe from destruction. Europe has not heard then, does not want to listen to anything now. She generally lost the habit of listening and hearing the truth.

By the way, a group of judges in the ICTY seemed to have the courage to announce that they found exhaustive evidence of the commission of war crimes by order of Radovan Karadzic in several localities of Yugoslavia torn to pieces. The position of these judges could have an impact on the overall outcome for Karadzic if he was at least 30 years ... The fact is that the prosecutor requested life imprisonment for Radovan, but the “humane ICTY” gave “only” 40, only considering the current Karadzic’s age, this period looks like another “The Hague” hypocrisy and a parody of humanism ...

The sentence itself against the leader of the Bosnian Serbs looks no more than an attempt to justify the money invested in the Hague Tribunal. Like, we are working here - what about the new salary?

In general, there would be a Serb, and the ICTY will have an article ...