How the Polish Minister of the Belarusian President tried to "probe" ...

March 25 2016
47
As you know, not so long ago, the West was so impressed with Minsk and the president of Belarus personally, that he began to reproach himself for the fact that Alexander Lukashenko is still noted in the sanctions list as the “last dictator of Europe”. The “dictatorial crown” was removed from the head of Alexander Grigorievich, and at the same time they decided that it was also time to tie up the sanctions against Belarus.


The strangeness is that during the last years in Europe, the word “Belarus” had “the only possible” associations “about horrific violations of human rights”, “cane dictatorship”, “infringement of the freedoms of dissidents”, and most recently in the EU overnight in Belarus, everything is normal and with dissidents, and with the rights of the rest of the “people”. Whether the European farmers were so influenced by the protests of European farmers with the dumping of manure and rotten apples under the windows of the local parliaments in connection with the Russian embargo, or many people had no idea where Minsk was until now, but found out about its geographical location after the appearance of such a concept as the “Minsk agreements”. In general, to all appearances, several factors came together at once for European “partners”, which led to the fact that Belarus was removed from the sanctions list. And here you don’t even know whether to congratulate the Belarusian brothers on this or not ...

And in order to try to somehow figure out what this first “post-sanctional” stage is for the Belarusian representatives of the Union State, it is worth considering the question of European policy metamorphosis regarding Minsk. If such metamorphosis in general is in practice.

In connection with the “withering” sanctions against the “last dictator of Europe”, the entrance to Alexander Lukashenko to the Schengen zone was closed. They say we will not tolerate the “dictatorial” foot to walk on our land, plowed by the plow of crystalline democracy ... They did not invite the Belarusian president and did not hurry to visit him. And now - the first changes.

One of the representatives of European democratic lights, Witold Vashchikovsky, head of Polish diplomacy, visited the Belarusian leader the other day. It must be said that this is the same Mr. Vashchikovsky, who systematically expresses his concerns about the "aggressive strategy of Moscow." This is the same Vashchikovsky, whom Russian “green men” see everywhere, and who never stops “expressing concern about how Russia, with their help, rejects the territories of other states”. In general, the typical Polish diplomat ...

And this typical Polish diplomat, apparently, was among the first “envoys” to visit Lukashenko with the clear goal to probe the ground to see if it wasn’t time for Minsk to tilt to the West and at the same time reject Russia. And, apparently, it was the Polish Foreign Minister (if only because he was close to Minsk not so far) that was the first one who at least should have tried to explain to the Belarusian leader that the European Union doesn’t just lift sanctions. Well, as if a hint that you, dear Alexander Grigorievich, should make “alaverdi”, which should not be limited to supplies of “Belarusian” shrimps to the Russian market.

In this regard, it is rather curious how Alexander Lukashenko explained to the Polish guest his understanding of the situation. Direct speech of the President of Belarus is presented information portal BelTA:

I really appreciate the fact that you consider Belarus a sovereign state. Frankly I want to say ... True, this does not apply to Poland. Poland has never put the question like that ... If the partners with whom we are conducting a dialogue insist that you choose with the East or with the West, that is, you with Russia or with Poland, with the European Union, put us before such a choice this position does not suit us. I am absolutely convinced that you do not need it today either. I think that Poland, more than anyone else, as the main player of the European Union, is interested in Belarus being not only an independent state, but also stable. I think you unstable another state in the west (?) after Ukraine is not necessary. This is not good for Poland. But together with you we can play a significant role, being in the epicenter of the European continent. And together we can significantly influence many processes that are taking place here. In our interests, in the interests of Poland and Belarus, but in no way to the detriment of our neighbors. But we will not give up ours either. This is your position, this is our position.

As can be seen, the speech of the President of Belarus clearly had an implication related to the Ukrainian Maidan (the term "European epicenter" is very appropriate here), and how Poland (together with Germany and France) took 21 February 2014 of the year to act as a guarantor of the agreement between Yanukovych and the opposition. Lukashenko hinted to Vashchikovsky that Poland, like its other “guarantors”, then (after the victory of the Maidan Radicals) washed its hands, and that today such a focus on Minsk among the “main players of the European Union” will not pass. Lukashenko made it clear to the Polish visitor that if he is going to promote the Ukrainian scenario in Minsk, Poland will receive another hotbed of instability at its borders. Does Poland need this? - open question. Poland itself, of course, is not necessary, but if you consider that Poland is a pawn in the hands of the world gendarme, then a completely different alignment. And this alignment is well known to Alexander Lukashenko.

Photofact: the Polish minister was seated under the Belarusian flag: 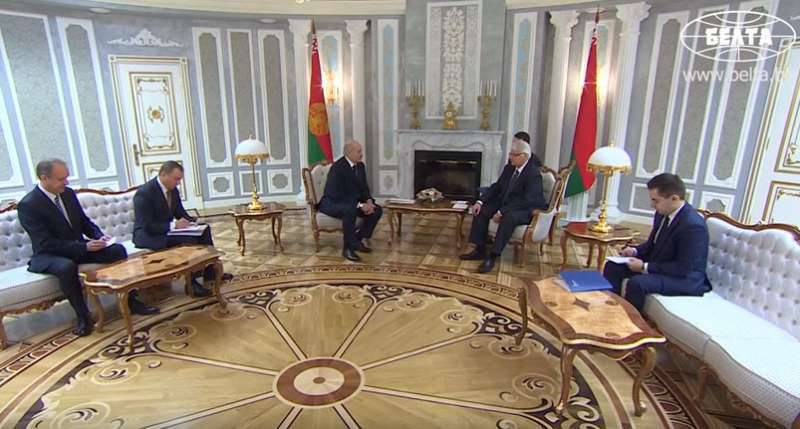 By the way, why did Alexander Lukashenko say about Belarus geographically to Poland: “in the west,” and not in the east? It can be assumed that this is a reservation. But it is believed that the reservation, as they say, according to Freud. By his address to Vashchikovsky, the Belarusian president kept his thoughts on contacts with Russia, making it clear that Russia didn’t need another hotbed near the western borders. The result was what turned out - in one phrase, Lukashenka, as it were, warned two partners at once - both the EU and Russia - that it was not necessary to try to drag Belarus as a rope. Lukashenko wants to partner with both the East and the West. But is this, in our times, a classical utopia? ..

Another interesting statement by Alexander Lukashenko:

As you protect your sovereignty and independence, so will we. Here we have absolutely no differences. Even sometimes we spy on you how to do it. As you carry out the socio-economic policy within the country, so will we. At the same time, we will try to do so that no one will ever rebuke us in a small democracy, in the absence of it. We will do so to make it no less than in Poland. If you are satisfied with this format, we will very quickly agree. I think it will be difficult for you to reject such a format, because we act according to your rules.

In fact, the President of Belarus says that he will not allow the European Union to get into its internal affairs in the same way as the European Union does not allow to interfere (though not all ...) in its internal affairs. Lukashenko says that if the EU is open for partnership with Minsk, then such an obvious rule is stupid not to accept. And in order not to leave Vashchikovsky's chances of distorting the message, Lukashenko adds that this is actually European rules, and therefore it would be strange for the EU to break such rules. Violate - Minsk will immediately make its move.

In general, in this situation, Vashchikovsky for Lukashenko became a collective image of all partners (or “partners” - in quotes) of Minsk. Addressing the Polish minister, the Belarusian leader managed to turn both to the EU as a whole, and to those who actually rule the EU today, and even to Russia. Lukashenko simply has nothing to lose - he presided before the sanctions, during the sanctions and will preside after the sanctions, and therefore he decided that now he can easily afford and determine options for partnership between Belarus and its neighbors and neighbors with Belarus. And if it doesn’t suit anyone today, then Alexander Grigorievich will instantly correct the external “vector” in relation to this “partner” ...
Video on BelTA channel on YouTube: