We underestimated the Chinese!

March 25 2016
10
The headline phrase from the popular anecdote of the Brezhnev era probably came to mind to the French after the two-day battle in the Zennan Pass, which is also the battle of Fu Lam Tao and Bang Bo. At the end of March1885, during the Franco-Chinese War, French troops from the Tonkin Army, commanded by General Louis Brier de Lisle, tried to break from North Vietnam to the Chinese province of Guangxi through the so-called Zennan mountain pass, but were rebuffed and forced to retreat .


Zennansky passage was a wide mountain gorge, which the Chinese blocked by two rows of stone walls with towers. At the bottom of the gorge, the walls had a height of approximately two human height, but on the slopes their height decreased and they turned into low toothed parapets for shooters. The French were not impressed with these fortifications and on March 23 they tried to storm them with the forces of the Zouav battalion under the command of Captain Paul Simon. The battalion was the vanguard of General Francois de Negrier’s 2 Infantry Brigade. The attackers, turning in chains, ran forward, but ran into heavy gunfire and retreated in disarray, losing six people killed and 29 wounded.

The next day, the whole Negrier's brigade entered the aisle - an 2500 man with ten mountain cannons. After a short artillery preparation, the general ordered the assault on the forces of two battalions to be repeated, and one more ordered to make a detour around the mountains in order to strike from the rear. However, the result was the same as yesterday, with the only difference being that the losses of the French increased many times over. There were so many Chinese behind the wall, and their shooting was so frequent that the attackers fell to the ground in dozens. The survivors, nevertheless, managed to reach the wall and the central tower with the gates beaten out by artillery fire, but behind the wall literally crowds of Chinese soldiers were waiting for them, who immediately rushed into hand-to-hand combat. The numerical superiority of the Chinese was overwhelming. In a bayonet battle, they crushed the French infantry, who had to hurry away, firing and dragging off the wounded.

To the credit of the French, this departure has not turned into a stampede. The Chinese pursued them, but Negrier, bringing reserves into battle, managed to beat off a counterattack. Meanwhile, the battalion, sent around, destroyed the Chinese outpost that guarded the mountain trail and, as was agreed, went to the rear of the enemy army near the village of Bang Bo. However, when he saw that the frontal attack failed, his commander did not dare to engage in combat, especially since there was no longer any sense in this. After waiting some time and realizing that there would be no new assault, he ordered his people to retreat, without attracting the attention of the enemy. However, the Chinese noticed him and attacked with large forces, which the French could hardly fight off.

In the second attempt to break through, Negrier's brigade lost 74 people killed, including seven officers, and 213 - wounded. On the third attempt, the general did not dare, and in the evening ordered to retreat to the base, in the town of Lang Son. Upon his return, he compiled a report in which he estimated the number of the enemy in the Zennan Gorge at 40 thousand people (!), And the loss - at one and a half thousand. In fact, there were about seven and a half thousand Chinese defending the passage. They did not disclose their losses, but their damage was clearly less than the figure that the French general called, who was defeated due to the underestimation of the enemy and the neglect of intelligence.

Most of the French did not try to attack in this direction. Moreover, the Chinese soon launched a counterattack and March 28 attacked Lang Son. The French managed to repel the attack, but in this battle General Negrier was killed. In general, the events in the Zennan Passage had little effect on the outcome of the war strategically, but they had important political significance, since the news of the defeat, aggravated by Negiere’s reports of countless Chinese hordes, played a role in the decision of the French authorities to begin peace negotiations. 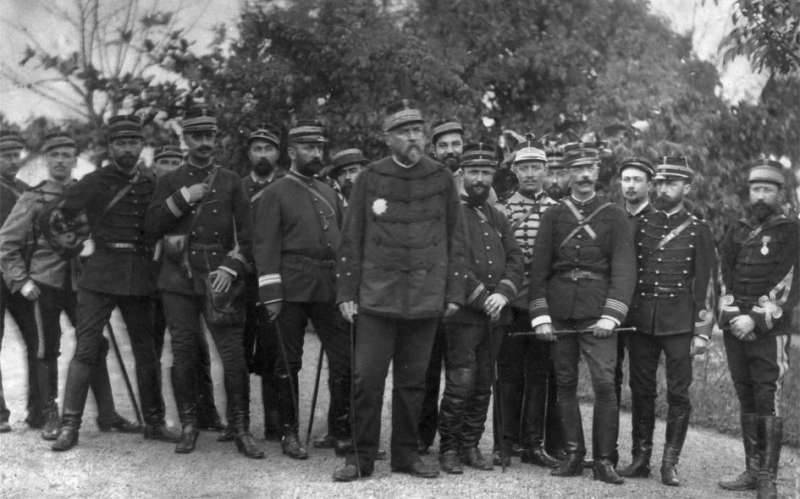 The commander of the Tonkin Army, General de Lisle with his headquarters. 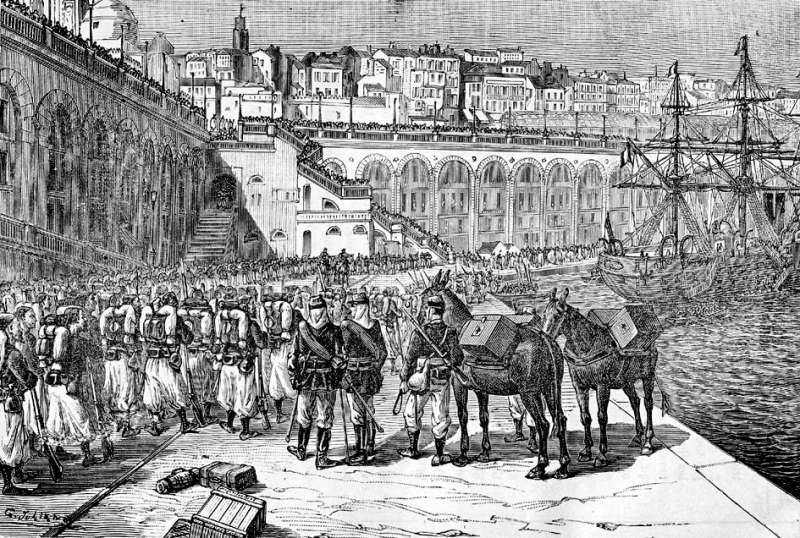 The French Zouaves, who will soon be advancing through the Zennan Pass, land in Tonkin. 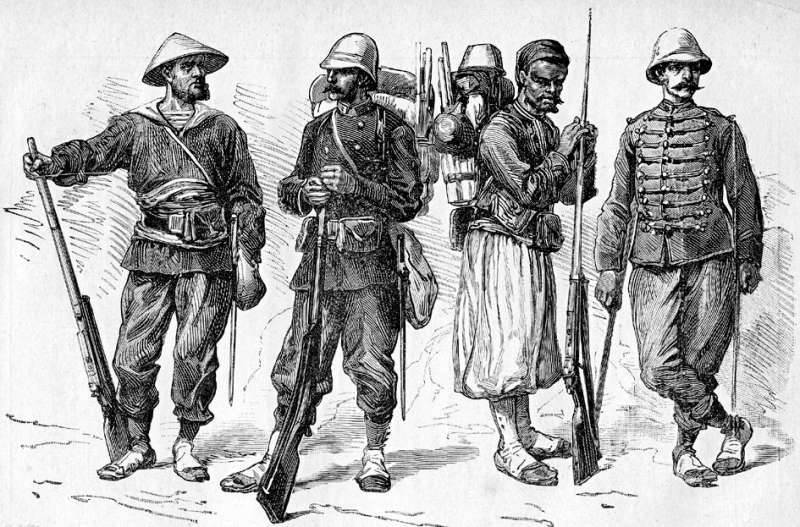 Samples of uniforms of French soldiers of the Tonkin Army. From left to right - marine, sapper, Zouav and officer of the Foreign Legion. 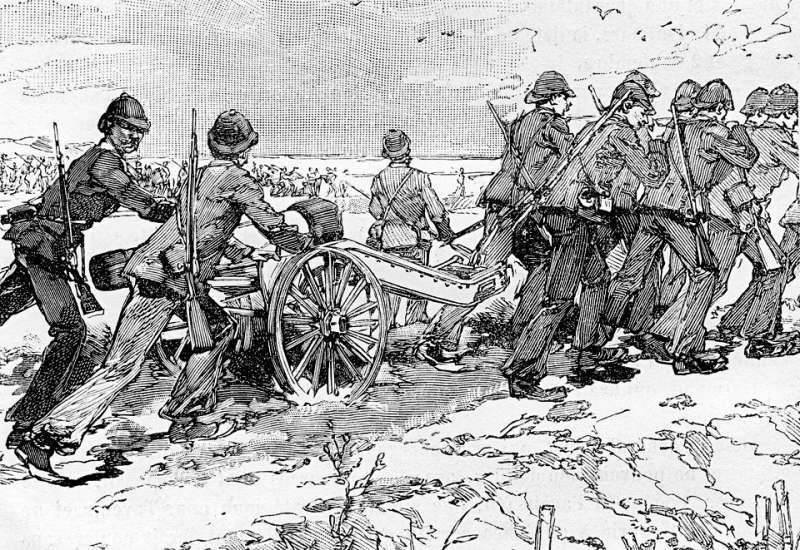 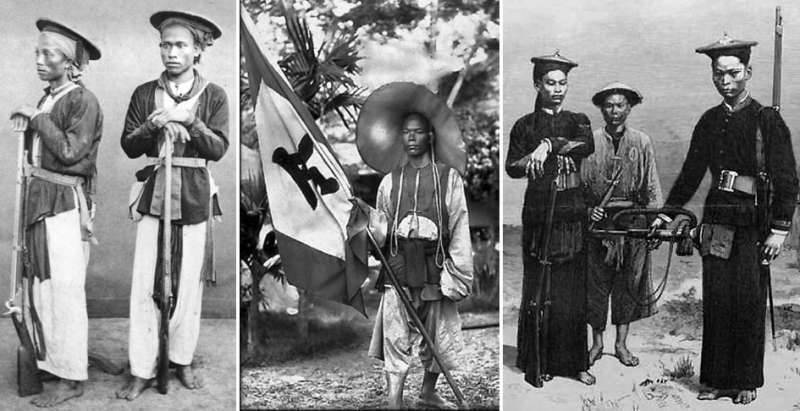 Chinese and Vietnamese soldiers who fought against the French in North Vietnam in 1885. 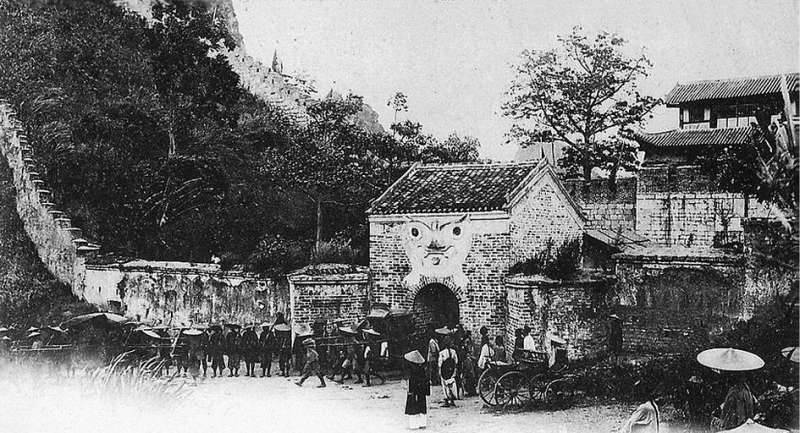 Strengthening Zennansky passage. In the center - a tower with a gate through which the French broke.