To bow to Putin?

March 25 2016
142
23 and 24 March was a two-day working visit of John Kerry to Moscow. The US Secretary of State asked for a meeting with President Putin (last week). The American press wrote that the parties would discuss the situation in Ukraine, in Syria, the terrorist attacks in Belgium and some more questions. In Russia, they hope that Kerry’s visit will be a prologue to the normalization of bilateral relations. 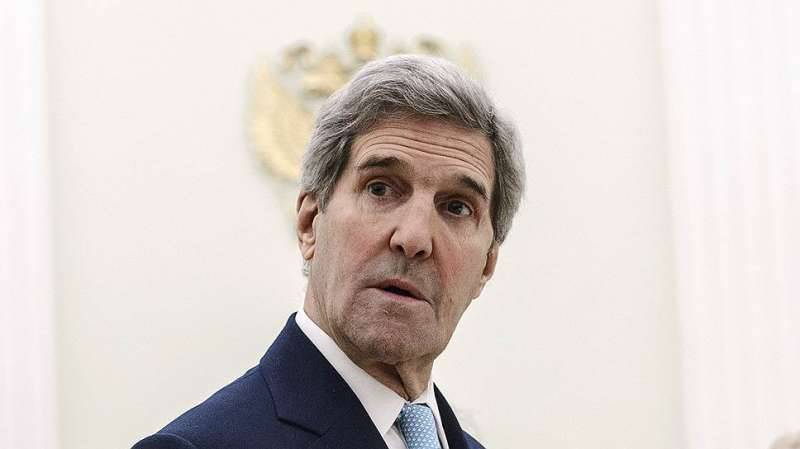 This working visit was the third visit to the US Secretary of State. He visited the Russians in May and December last year.

As the Western and Russian press reported, the central issues at the talks should be the situation in Ukraine, the situation in Syria and in general in the Middle East, problems of international security, including the recent terrorist attacks in Belgium.

According to the press secretary of the head of the Russian state Dmitry Peskov, who led 23 March TASS, the themes for Kerry’s talks with Putin on March 24 should be the Syrian settlement and the implementation of the Minsk agreements in Ukraine, but there is no fixed agenda for the meeting.

The TASS also provided information from the Department of State: in Moscow, the parties will discuss “the ongoing efforts of the International Syria Support Group (MGPP) to end the hostilities, provide assistance and increase access to humanitarian aid, promote the political transition in Syria, and combat the Islamic State .

In Russia, they hope that the visit of John Kerry will help normalize bilateral relations. The Russian Foreign Ministry noted: “The situation in the Russian-American relations remains difficult. The series of confrontational steps taken by Washington under the pretext of the Ukrainian crisis has hit hard the cooperation. ”

"Voice of America" focuses on the issue of terrorist attacks in Belgium, which John Kerry described as “an attack on the people of Belgium and the very heart of Europe”.

A senior State Department official told reporters that Kerry views these attacks as part of the threat posed by the Islamic State.

With regard to the Syrian theme, then, according to the same State Department representative, John Kerry intends to get acquainted in detail with the positions of Putin and Lavrov regarding the results of efforts to implement a political transition in Syria. The man from the State Department emphasized that the position of Washington was unchanged: Assad must leave.

Mr Kerry would like the Kremlin and the White House to begin a movement towards a political transition in Syria, a State Department spokesman said. He also added that Putin and Asad had recently been on the telephone and that Putin was probably aware of the situation.

The possible agenda for the meeting between Putin and Kerry is discussed by the chief editor of Carnegie.ru, Alexander Baunov. His opinion leads BFM.ru.

“Of course, Kerry is interested in finding out how truly Russian troops are coming out, how complete, how much, who and what remains there, what those who remain are going to do,” said the expert. - And mainly he is interested in what we are going to do next. So we unexpectedly appeared in Syria, completely outplayed all the Syrian scenarios that Turkey, the USA and the Gulf monarchies, the oil scenes had. Then suddenly they announced just as unexpectedly that we were disappearing. And then what? Still, in America, the election campaign, after all, Obama is leaving, and he needs to sum up some results, pass some kind of foreign policy to his successor, make sure that this election campaign passes without foreign policy failures that could strike the Democratic Party’s campaign . Actually, Kerry is trying to understand what Russia is going to do next in the Middle East, in Ukraine, somewhere else, in the Baltic States, God forbid. Will she do something further? ”

“The details of Kerry’s meeting with Putin are unknown, but it’s clear that the Secretary of State is now acting as an intermediary between US President Barack Obama and Putin, who are equally interested in the Syrian negotiations to achieve a result,” Gazeta.ru Alexander Bratersky and Vladimir Dergachev.

Both Russia and the United States do not exclude a plan for the federalization of Syria in the event that it is impossible to preserve the integrity of this state for objective reasons. “It is possible that this option is considered as“ Plan B ”,” one of the Russian parliamentarians who are familiar with the situation in Syria told Gazeta.ru.

According to some experts, the newspaper notes, between Washington and Moscow, there are agreements on Syria. Russia could withdraw its troops in exchange for recognition of the Alawite part of the country as its area of ​​responsibility. Also, Moscow could get guarantees for President Assad.

Probably, following the meeting between Putin and Kerry, the Russian-American dialogue on Ukraine will be intensified. Gazeta.ru cites the opinion of Ivan Safranchuk, Deputy Head of the Institute of Actual International Problems of the Diplomatic Academy of the Ministry of Foreign Affairs of Russia. He recalled that Kerry’s visit to Sochi and his meeting with Putin in 2015 launched a dialogue on the implementation of the Minsk agreements between Russia and the United States at the level of US Undersecretary of State Victoria Nuland and Russian presidential aide Vladislav Surkov. Today, despite the "low level" of relations between Russia and the United States, the dialogue on important topics continues. According to Safranchuk, the United States takes Russia more seriously when relations between countries are not at their zenith.

Director of the Institute for Applied Political Studies Grigory Dobromelov said "Arguments and Facts"that John Kerry’s visit to Moscow is “obviously” related to Putin’s decision to withdraw troops from Syria. The official US response to this conclusion suggests that this was a complete surprise for them. And now the Americans "want to compare watches with the Russian leadership."

“True, the ultra-Westerners believe that the state secretary is coming to us to allegedly accept Putin’s surrender in Syria. This is not true. The capitulation is accepted on the side of the winner or on neutral territory, for example, in the countries of the European Union. And here it is absolutely clear that this visit is needed specifically for Washington, and not for Moscow. In addition, the Ukrainian issue is likely to be included on the agenda, but Syria will, of course, remain the key topic of the meeting. ”

Director of the Center for Global Interests in Washington, political scientist Nikolai Zlobin said in an interview "Moskovsky Komsomol"that Kerry came to Russia to understand the actions of Russia.

"Surely this is one of his main tasks," said the expert. - Plus, the question probably arises here: how is the current situation in the Donbas evolving, especially in connection with the issuance of passports? It is not very clear how to treat the Americans, whether it is a humanitarian action or a political demonstration. Also, the Americans, of course, would like to understand the state of Russian-European relations, because now the Europeans have turned out to be much more rigid towards Russia than even Washington, who is distracted by the election campaign. ”

They expect an additional impulse from the Russian-American consultations to resolve the Syrian crisis in new conditions - when the Kremlin’s main decision was to withdraw the bulk of the contingent from Syria. Until now, the US administration has not given an official assessment of this decision by the Russian president, recalls analyst Nikolai Bobkin ("Fund of Strategic Culture").

Of course, there are many opinions. In our opinion, Kerry’s visit is much simpler. Obama and Kerry were convinced: Russia is indeed withdrawing the bulk of the contingent from Syria. So, it's time to talk about the fate of Assad.

The State Department does not hide the fact that the installation of the White House has not changed at all since the times of Hillary Clinton: “Assad must leave.” This loud slogan of international American democracy, Mr. Kerry, no doubt brought once again to the attention of Lavrov and Putin.

Kerry and Obama believe: the next president of the United States will be Hillary Clinton. The White House is already preparing a suitable foundation for a democratic successor. In the end, the slogan "Assad must go" her copyright.