March 24 2016
10
Over the past day, the cease-fire regime was broken 5 times, the fire from the opposition forces on the positions of government forces was carried out from artillery and small arms weapons, says the bulletin of the Russian Center for the Reconciliation of the Parties in Syria, published on the website Ministry of Defence. 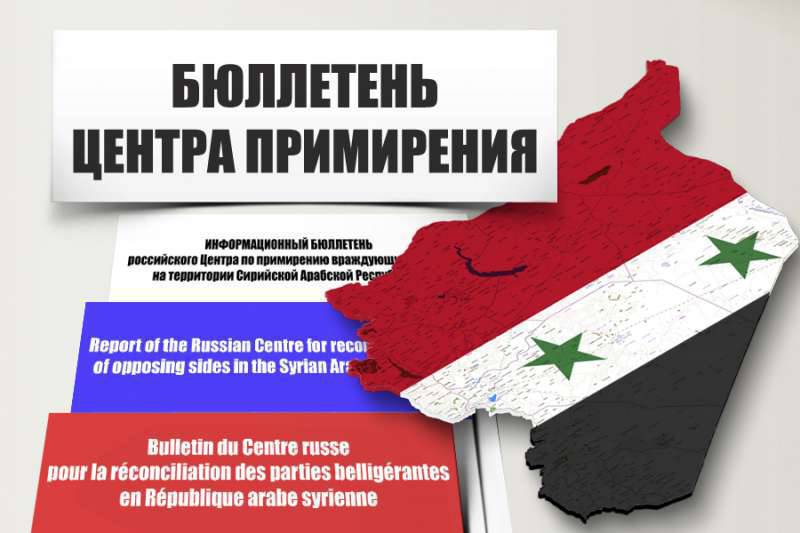 «General information on the progress of reconciliation of the conflicting parties

The number of armed groups that have declared their commitment to fulfill and accept the cessation of hostilities remains unchanged - 43.

Monitoring Compliance with the cessation of hostilities

The cessation of hostilities on the territory of the SAR was generally respected.

In the LATAKIA province, armed formations of the Ahrar al-Sham group, which included themselves in the opposition, put up mortar fire at the SANDRAN village from the area of ​​the Shamruran village.

In the area of ​​the settlement of TAIR-MAALA in the HOMS province, an armed unit "Ahrar ash-Sham" fired from small arms with units of government troops.

The Russian armed forces and the Syrian air force against opposition armed groups that declared the cessation of hostilities and reported their position to the Russian or American reconciliation centers did not strike.

A working meeting was held between representatives of the operational group of the Russian Conciliation Center and the Ministry of Reconciliation of the Syrian Arab Republic. Discussed issues of humanitarian assistance to the population of the DAMASK province.

The formation of a humanitarian convoy for the residents of the BABIL settlement of the DAMASK province has begun.

The next negotiations took place in the mode of a telephone conference call between the leadership of the Russian and American reconciliation centers. The parties exchanged information on violations of the cessation of hostilities in Syria. Discussed the problematic issues of the delivery of international humanitarian convoys to the province of Damascus. There has been a significant reduction in the number of violations using heavy weapons. ”