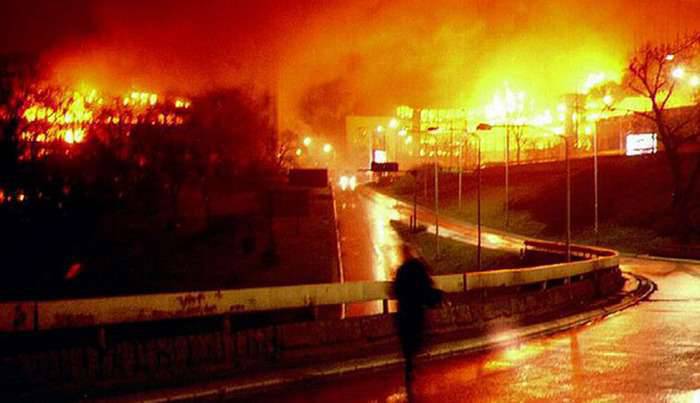 Sometimes compassion is not alien to Western leaders. For example, Federica Mogherini, EU High Representative for the Common Foreign and Security Policy, right at a press conference, mourned the victims of the terrorist attacks in Brussels. And this is right - to rejoice at the death of civilians at the hands of terrorists can only some Ukrainian "Banderlog". However, it is much easier to mourn your own, Europeans, than representatives of “foreign” nations. Sometimes these “aliens”, however, are also Europeans, but “Fas!” Sounds from across the ocean - and that’s it ... Representatives of an entire people become “aliens” overnight. “Outlaws” and “pariahs” who are not a sin to be executed with the help of a high-precision powerful weapons.

17 years ago, 24 March 1999, citizens of the Federal Republic of Yugoslavia became such “pariahs”, such “outcasts”. Air raid broke into the lives of millions of people - and now ruins, blood, tears and death, always standing somewhere nearby and capable of overtaking anyone ...

And now there will be no mourners live on either the three-year Milica Rakic ​​from Batainitsa near Belgrade, nor on the young math girl Sana Milenkovic, who died during the bombing of the bridge over Velika Morava, nor on the two-year-old Marko Simic from the city of Novi Pazar, next to which NATO's smart bomb exploded ...

And to all the reports of the numerous victims of the US military-NATO military operation "Merciful Angel" (!), Western politicians replied with a smile: "Milosevic is to blame for everything."

It is impossible to forget - in the center of Europe destroyed white, blooming cities. Destroyed small villages that met the spring and were drawn to life. They destroyed the television center, killing 16 employees (later they would blame the director of the television center Dragoljub Milanović for these deaths - after all, according to their logic, then it was necessary to shut up and stop telling the world about NATO crimes). They destroyed the Chinese embassy in Belgrade along with diplomats (three embassy staff members died). Hospitals, schools, motels, nursing homes, power stations, bridges — everything could be targeted. And everyone could be the target of NATO.

Tormented by previous ten-year sanctions, the Federal Republic of Yugoslavia resisted, and this phase of active resistance lasted 78 days. Due to the resilience of the country in the final document - UN Security Council Resolution No. 1244 - it was possible to consolidate the principle of the country's territorial integrity. Kosovo and Metohija are an integral part of Serbia.

Only later this resolution of the UN Security Council will be insolently violated by those forces that have unleashed a criminal aggression. “Kosovo” (as Albanians say) will become a supposedly independent pseudo-state. However, this independence will be recognized by most countries.

This is not Abkhazia and South Ossetia, which do not want to live with Georgia, but, in the opinion of the “world community”, are obliged. Not Donbass, which, in the opinion of the same "world community", does not have the right to independence from Ukraine (although it was artificially attached to Ukraine). This is Kosovo and Metohija. Historical the place where the great battle took place in the distant 1389, in which the Serbs, although defeated, but overshadowed Europe. There the Ottoman army was so weakened that it affected the plans for its further advance on European lands.

Belgrade was on fire, and Madame Albright, a Jewish girl rescued by Serbs once, rejoiced in every bomb blast, every deceased Serb. When she was reminded of her longstanding salvation, she said, smiling: “I love the Serbian people.” The next day, the bombing was intensified ...

The Federal Republic of Yugoslavia survived under the most severe NATO aggression, but then, in October 2000, it collapsed as a result of the “velvet revolution”. Trials began over Serbs who dared to defend their homeland.

“In terms of intensity and military force, aggression against the Federal Republic of Yugoslavia is the largest in the world after the Second World War. It was undertaken by an alliance of 19 most developed countries, 676 times more economically powerful than Yugoslavia, - only then, being in a NATO prison, President Slobodan Milosevic said at the Hague process, - NATO destroyed much more hospitals than tanks", they hit a lot more schools than tanks, they hit a lot more medical centers and kindergartens than tanks."

March 24 The year 1999 is a day when international law didn’t just shatter at the seams. It was trampled by a rough NATO boot in a huge pool of blood. Unfortunately, the aggressors are still at large ... This must be corrected by the insurgent humanity.