Exchanger for Savchenko, or With luggage - on the way out? ..

March 24 2016
175
On Tuesday, the final verdict was passed against a member of the nationalist illegal armed group "Aydar" Nadezhda Savchenko. The Donetsk court of the Rostov region found the pilot of the spotter guilty of the death of VGTRK journalists Igor Kornelyuk and Anton Voloshin, as well as illegally crossing the Russian border, and sentenced her to 22 years of imprisonment in a general regime colony (for Russian women, strict regime does not provided) and a fine of, rather, symbolic 30 thousand rubles. And on the basis of the fact that Savchenko’s stay in custody during the trial enters into a term of imprisonment, she has to serve her de jure sentence about 20,5 years. De jure. 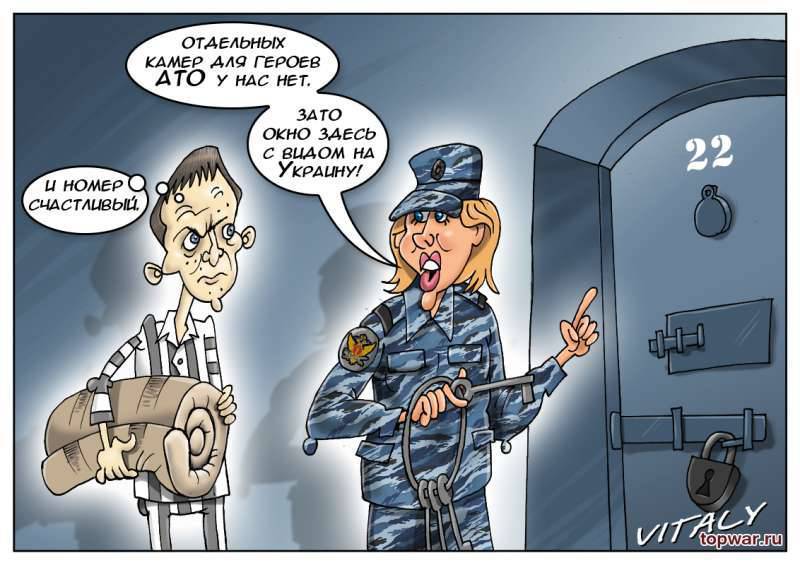 In this “de jure” lies the main question: will the representative of the Ukrainian punitive battalion “from call to call” serve for the death of Russian journalists or will she exchange? In Kiev, they have already announced that they are issuing a proposal to exchange Savchenko for two Russian servicemen (Aleksandrov and Yerofeyev), who continue to be called personnel in Ukraine. Poroshenko’s ukroprezident has announced that he is ready for an exchange immediately after the Ukrainian court issues its final verdict against Russian citizens Yerofeyev and Aleksandrov.

Washington also joined the “process”, from where, through the mouth of US Vice President Joseph Biden, it was announced that Russia “is obliged to release Savchenko on the basis of the Minsk agreements”.

Oldie Joe quoted news agency TASS:
The Vice President (Biden) condemned the unfair accusation and sentence of the Ukrainian pilot and member of parliament Nadezhda Savchenko and pointed out the obligation of Russia to release her according to the Minsk agreements.

The vice-president of the state, and completely grabbing foreign nationals in third countries without any reason and often throwing these citizens into the secret prisons of the CIA without trial or investigation, declares “the injustice of the prosecution and sentence”? Joe, you outdid yourself! By the way, the word “Guantanamo” doesn’t cause you to rebel against injustice because of old Joe? Last name Booth (Victor Booth), Joe, also does not mean anything to you? .. And in general: did you, old man, read the Minsk agreements? If yes, then why are you not indignant, my dear, that your Kiev serfs have not yet deigned to fulfill these agreements, carrying out an exchange of all for all. Oh yeah, then YOUR slaves ... and therefore, how can Joe be outraged if they look into his mouth.

Well, God bless him, with this Joe. Now, actually, about the case. About what is the prospect that the court decision will be executed on all 100% - that is, that Savchenko will polish the plank beds in the colonies with the 20 mentioned over the years?

There are a million reasons to believe that the boy Nadya, who denoted the presence of female forms as a result of exhausting dry hunger strikes during the trial, will indeed be fallow. And even a million one basis ... For, as is known from the words of the president, the year we have is not 37 ... And Vladimir Vladimirovich himself is, of course, not Joseph Vissarionovich.

But even this is not the main thing (by the way, the USSR also resorted to the practice of exchanges, which not everyone understood and shared). The main thing is that about the possibility of issuing Savchenko to Ukraine, in due time, according to news agencies, Vladimir Putin spoke in Minsk. And if you really said, then the issue (or exchange) is likely to take place.

From a household point of view, the very possibility of issuing or exchanging Savchenko looks more than slippery. One of those arguments "for" (issue / exchange), which is often found in the media and the blogosphere: two former servicemen will be returned to Russia for Savchenko, and the relatives of Aleksandr Aleksandrov and Yevhen Yerofeyev, who are in Ukrainian prison, will be very happy.

No doubt - the soul for the fate of Alexander and Eugene hurts. However, those who speak of the utter goodness of the exchange of Savchenko for two Russians are trying to persistently ignore an important factor. This factor is this: can a person’s soul be rooting for the fate of Alexander and Yevgeny and at the same time not be rooting for the relatives of Anton and Igor who died in Luhansk oblast - those Russian journalists who came under fire from Ukrainian artillery, directed by N. Savchenko? It turns out that, blessed with some, can one carelessly spit into the souls of others? If we are talking about the moral and ethical side of the issue, then for some reason, many representatives of the ultra-liberal Panopticon, stubbornly stating the firm need to free (or exchange) Savchenko, do not stammer about the interests of the victim of the crimes of Savchenko, the families of Russian journalists Igor Korneluk and Anton Voloshin, the victims of Ukrainian lawlessness.

And then they got embroidered embroidery, spoiled in blogs, and that's it - hell, advocates of law. Ugh! It's disgusting ... Honestly.

But, no matter how disgusting, and witness the "triumphal exchange" (I want to be wrong), we still become. Yes - from the household point of view, this will be regarded by many as spittle, as an actual indulgence of any war criminal.

But this “medal” has a downside. This side of the household estimates is not one iota. But with political intrigue is even connected. The fact is that the raised to the rank of the Ukrainian national heroine Savchenko (if released) in the rank of this most nationwide heroine in Ukraine is unlikely to last long. If, from the point of view of the Ukrainian philistine, Savchenko is the ideal of behavior in the “dungeons of the Russian aggressors”, “the patriot of Ukraine to the core,” and in general “the face of Ukraine”, then, let's say, for specialists on the other side of the border, it’s already clear that places of imprisonment Savchenko may well with "certain baggage." And this “baggage” will not allow Savchenko to become his for the current Ukrainian elites. Already, in the Ukrainian blogosphere, there are remarks about whether Savchenko plays the Ukrainian public with his tridents on T-shirts, singing the hymn and other ostentatious Ukrainianness, does not want to cast off the fact that someone could even talk something to convince ...

Even if Savchenko, crossing the border after a hypothetical (at the moment) exchange, tries to forget about some conversations and the CO, some people in Kiev are unlikely to get rid of the ulterior motive that “the heroine of Ukraine” is a sent Cossack ... “AHressor” Nadiukh let go ... And how did he let go, why did he let go, and for what invisible reins does the “heroine” hold? - who knows how the press? As a result, the fact of the release of Nadi (again, if there is one), I suppose, in some time will cause new questions in Ukraine about the “Putin insidious plan”. They (and even at the level of the SBU and the Ministry of Internal Affairs) are seriously convinced that Russia is involved even in the terrorist attacks in Brussels! But the “Kremlin baggage” will definitely be found for Savchenko, even if he is not there ... Shkiryak will find it. Gritsak will find ... After all, nobody has yet canceled the Ukrainian self-PR.

You can, of course, say that the Ukrainian "some people" worked with Aleksandrov and Yerofeyev, too, and therefore you need to have one - they’ll look after the likely exchange ... But then it’s even strange to compare. After all, Aleksandrov and Erofeev today are ordinary Russian citizens, and who is Savchenko? And Savchenko is, as the West itself, in the person of Biden, then of Mogherini, repeats to us every single day — a member of the Ukrainian parliament and a member of the Parliamentary Assembly of the Council of Europe. And if the deputy and member Gritsak and Shkiryak "find" "Kremlin baggage", then there is a new zrada in the format "Putin's man in the parliament and PACE !!!", - zrada, able to become the winner among all the zrad of the last two Ukrainian seasons .. .

Ctrl Enter
Noticed oshЫbku Highlight text and press. Ctrl + Enter
We are
The release of Savchenko. Implications for Russia and UkraineThe trial of Nadezhda Savchenko. Will the sentence be strict?
Military Reviewin Yandex News
Military Reviewin Google News
175 comments
Information
Dear reader, to leave comments on the publication, you must sign in.