Is it time about friendship and chewing gum? No time!

March 24 2016
68
Analysts at Bloomberg believe that the time has not come to normalize relations with Russia. Restoring the previous level of trust between Western states and the Kremlin is premature. "The American Interest" hints that there is a long standoff ahead: another eight years. Why so long? The fact is that Moscow does not have the strength to win this confrontation, and the West has no will. 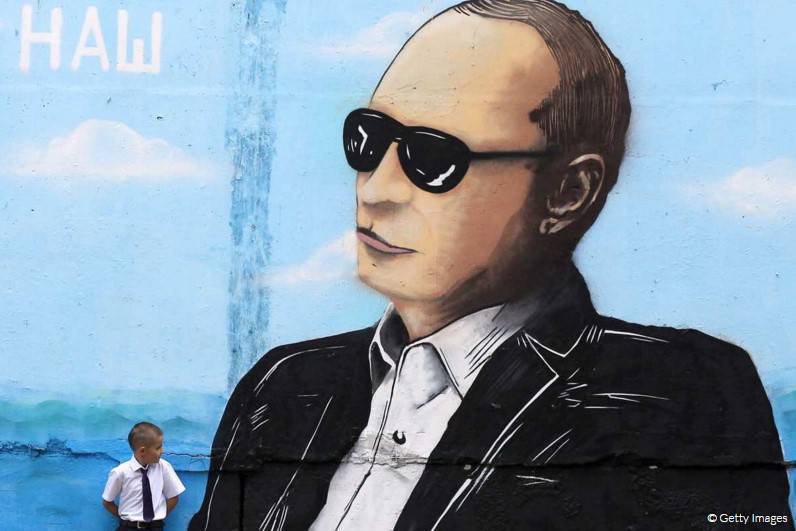 In the article of Mark Champion («Bloomberg») right in the title says that the time for the normalization of relations with Russia has not come yet. Yes, it did not come, despite the fact that "two smartest analysts" writing about Russia claim that it has come.

The first of the “smartest” - Fedor Lukyanov, who heads the Russian Council on foreign and defense policy, reminds the author. He argues that after a short operation in Syria, Russia can sit at the negotiating table opponents of Assad, and the West should be ready for constructive negotiations on Ukraine (read - on sanctions).

The second clever, Anatole Lieven, a professor at Georgetown University, "goes a step further," assuring the world community: "Do not be afraid of Russians." Do not be afraid of them, neither in Syria nor in Ukraine. Putin is not at all going to “recreate the 18th century” and attach “Novorossiya” to Russia. The professor believes that Putin was never going to do this.

True, the journalist "Bloomberg" is not as obvious as the professor. In addition, the main thing for a journalist is not at all the foreign policy ambitions of Russia. He is trying to look at the world globally. And then there are "two questions."

The answer is simple: inside.

2. Can Russia be a partner in solving joint problems of continental security?

This question is more complicated. After all, Russia claims that such security can only be achieved by eliminating NATO. In Moscow they say, the author writes, that the membership of a country in the EU is equivalent for this country to Soviet occupation tanks. The Russians also think that all popular protests are the fruits of the CIA’s activities, and the Western world is opposed to Russia, and does not react at all to its behavior.

Professor Lieven is probably right in saying that Putin has no desire to invade the Baltic states or Poland. Nevertheless, Putin is "unpredictable." He "sent strategic bombers into the airspace of NATO countries," Russian submarines "were found in Swedish waters," missiles were "in the Kaliningrad enclave," and so on. Putin's opponents are alarmed.

And it is also impossible to predict what will happen in Ukraine. You can’t know how it would be if Putin succeeded in a bloodless coup in the Crimean scenario in the so-called. New Russia - from Odessa to Kharkov. “Evidence testifies,” the author is confident that Putin has changed his military decisions because of failures, and not out of some kind of “self-restraint.”

On the other hand, Putin "promoted the cease-fire in the Ukrainian Donbass." Again, continues Champion, Russian fighters and military equipment "remain in place on Ukrainian soil." “We still do not know how far Putin is ready to go,” the analyst expresses his concern.

Anton Barbashin (Anton Barbashin) in "The American Interest" writes that the West and Russia are waiting for a long confrontation. Two years after the annexation of the Crimea, it became clear: neither Russia nor the West can achieve advantages in the struggle: one will not have enough power for this, the other will not.

Two years ago, 21 March 2014, just 5 days after the so-called referendum on the status of Crimea, the Russian Ministry of Defense instituted the medal "For the Return of Crimea". It was intended to reward soldiers who took part "in the assault and the illegal annexation of the Ukrainian Peninsula," the author writes. And the majority of Russians considered “the Crimean operation to be an achievement competing with the flight of Yuri Gagarin into space”.

The West was “shocked” by how well the “special forces” acted in the Crimea. And political scientists, who could not forget "the invasion of Russia in Georgia in 2008," for some reason, suddenly surprised, "Putin’s readiness to tear off a piece of territory from a neighboring state, completely ignoring the interstate borders."

Putin and his advisors clearly believed that they were “at the dawn of a new era” when they would finally be able to “restore influence” in the post-Soviet space.

Time passed, and many experts in the West thought that the large resource costs of wars, combined with low oil prices, sanctions and international political pressure, would bring the political "Putin's demise" closer.

However, the West miscalculated. However, Putin miscalculated too. Both sides, apparently, miscalculated, the author writes. Putin now rules Russia "in a constant anti-crisis regime," urging his people to the need to "return to their former national glory." The West “annoys” Putin, but does not restrain him. And this is the way to “trouble”, the author is sure.

The reality is that two years after the "annexation" of the Crimea, Putin did not become an outcast, further noted in the material, and Russia did not turn into an isolated country. Moreover, the Russian army "invaded Syria" on behalf of Bashar Assad, which led to an increase in the flow of refugees to Europe. As a result, the West excluded the “Kiev problems” from the priority ones, “at least for a while.”

And yet Western sanctions are not likely to be lifted in the near future, at least those related to the annexation of the Crimea. No one is in a hurry to recognize Crimea as a legitimate part of Russia.

Most analysts now agree: Putin will remain in power until the end of his fourth term. Therefore, the next eight years, Barbashin believes, are likely to be saturated with “various clashes” with the West.

So, in the influential Western media, the view is expressed that it is premature to normalize relations with Russia. Putin is “unpredictable,” and “Russian fighters and military equipment” are still “on Ukrainian soil.” In addition, Moscow stubbornly believes that the security of the world implies the "elimination of NATO."

A long opposition of the West and Russia due to the lack of will of the first and insufficient strength of the second is also predicted. The West has failed in two years after the “annexation” of the Crimea to turn Putin into an “outcast”, and “isolate” Russia. Putin, however, still got low oil prices, sanctions and international political pressure. And now his government has to work "in a constant anti-crisis mode."

Putin will also rule Russia in the future: according to experts, he will remain in power until the end of the fourth term. That is why the coming eight years will be saturated with “disassembly” of Russia with the West. Sanctions will continue.

Observed and commented on Oleg Chuvakin
- especially for topwar.ru
Ctrl Enter
Noticed oshЫbku Highlight text and press. Ctrl + Enter
We are
Syria: Americans scare themselves, and Asma Asad buys chairsSyria: the rebels do not give up because they do not want to die
Military Reviewin Yandex News
Military Reviewin Google News
68 comments
Information
Dear reader, to leave comments on the publication, you must sign in.