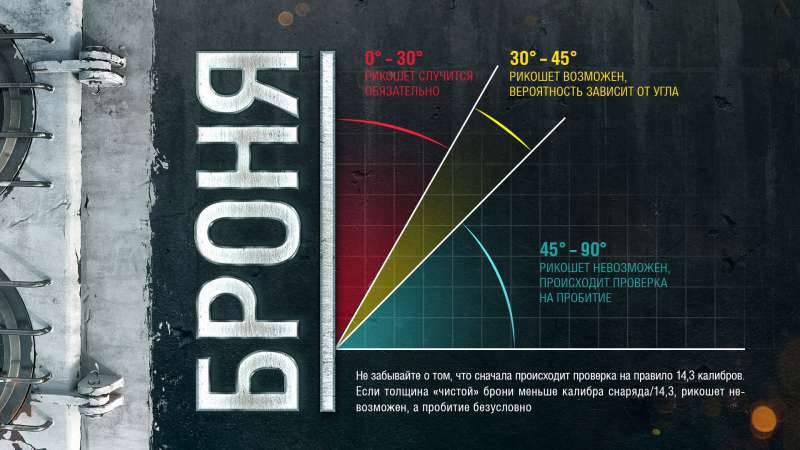 In the “Fleet” section, a number of articles were published that inspire certain fears for the weak minds of the younger generation. It is clear that there is spring in the courtyard, and the EGE will soon come, but no one forbids learning to think logically before rushing to multiply the first available numbers.

Do not count where necessary, and count where it is impossible. For conducting rigorous calculations, no less rigorous initial data are necessary. And the more complex the system, the more various factors affecting the result. It is impossible to make scientific calculations without having accurate information about the layout of a warship, the distribution of loads on its decks and platforms, without specific values ​​of the load items, without taking into account the lengthening of the hull and the shape of the lines of its underwater part.

At the amateur level, the calculation of exact parameters is impossible. This should be done by those whose professional duties include such calculations.

We can only draw general conclusions and find potential solutions to problems, focusing on known facts about similar constructions. Not owning all the coefficients and baseline data, publishing the results with an accuracy of three decimal places is a sure sign of juggling with facts and pseudoscience.

The simplest example: the calculation of the reliability of the weapons systems of the ship according to the scheme of the GEM - MSA - UVP. The author of the calculation hardly guessed that when firing from the Mk.41 installation, air under pressure of 225 pounds per square meter was required. inch (15 atm.) and continuous cooling with seawater - 1050 gallons per minute. The arming of “Burke” will immediately fail if the pump and the main compressor HFC-134a are damaged.

But this was not taken into account in the presented calculations.

The reliability of the system is reduced in all modern ships. No wonder. To disarm long-range air defense of the Cleveland cruiser, you need to either destroy all 6 AU 127-mm, or 2 KDP, or power engineering (electricity supply to KDP and AU drives). Destruction of one KDP or several AUs does not lead to complete system failure.

Damage to the main switchboard or fuse compartment was immediately brought to the brink of destruction of the WWII era cruiser. So no need to wishful thinking. Critical systems are available on any ship - what now, what 70 years ago. And they have a stronger relationship than it might seem from the outside.

The role of electricity in the combat capability of WWII ships is incommensurable less, because even with the power off, the fire can continue with manual shells and coarse guidance with optics ...

No one was willing to rotate the 300-ton tower by hand. However, they would not even have deployed even the universal AU of the Cleveland cruiser. 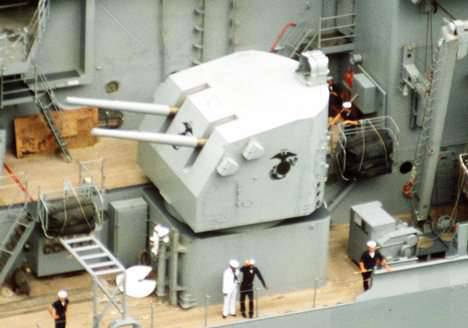 ... armored ancestors could only shoot from guns within sight. And modern ships are universal and able to destroy targets hundreds of kilometers away. Such a qualitative leap is accompanied by certain losses, including the complication of armaments and as a result, decreased reliability, increased vulnerability, and increased sensitivity to failures.

Gyroscopic speakers and multi-ton analog computers of ships of the time of WWII broke down from the slightest shaking.

The one who took to compare reliability weapons ships of different eras, somehow took into account the difference between the sensitive mechanics of gyroscopic KDP devices and modern circuits that are extremely resistant to strong shocks and vibrations? Not? Then what kind of "scientific" can claim such a "calculation"?

Today, the elimination of a ship from active combat can only be turning off its radar.

In the old days, when the ship was de-energized, sailors could manually fire from 20-mm anti-aircraft guns. Modern destroyers also have autonomous short-range air defense systems. Instead of the primitive “Erlikonov”, the “Phalanx” automata with their own fire control radar mounted on a single gun carriage. 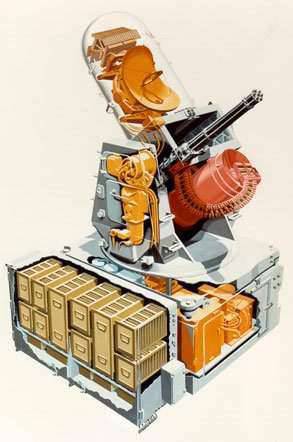 He will not leave the battle soon. The modern destroyer is ready to fight to the last living sailor. It has 70 sets of “Stingers” on board (if it seems funny to someone, compare the capabilities of MANPADS with the characteristics of RIM-116 or “Dagger”).

Autonomous "Falanx". Automatic “Bushmasters” with manual hover. Finally, “independent combat modules” can separate from the damaged destroyer - two helicopters capable of searching for submarines and firing at surface targets with “Hellfire” and “Penguins”. 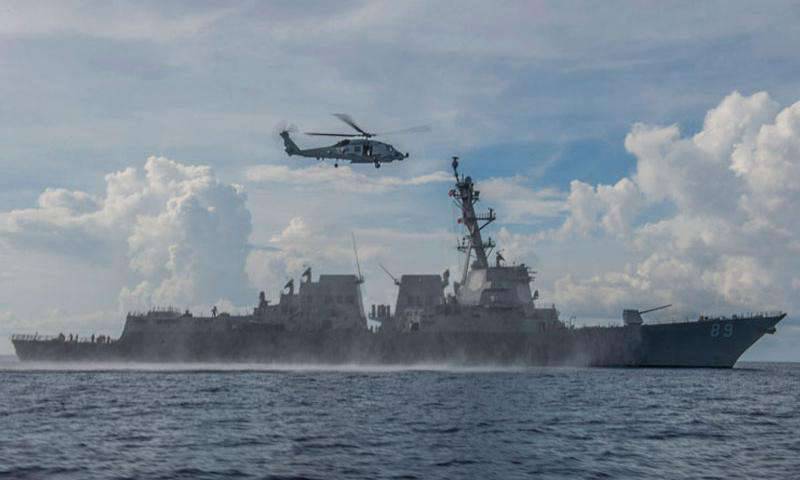 The touching moment was the acquaintance with the “rational” booking scheme proposed by the regular participant in the discussion with the nickname Alex_59. He did not lose his head and calculated local protection for the modern destroyer of the type “Burke”. From the calculation - 10% standard displacement, 788 tons of armor steel.

What happened in the illustration:

It would seem all obvious: 788 tons spent in the void. “Protection” turned out in the form of small “patches”, not capable of covering even a quarter of the board space. However, the following became clear: in the 3D space, each of the rectangles is a parallelepiped. Simply - a box without a bottom, with the thickness of the side walls 62 mm.

As a result, it turned out the whole seven separate strongholds. Are you seriously?

The same goes for defense protection, art. cellar and combat information center. I'm not talking about booking the bedding of “Falanx”, in which there is no meaning at all. 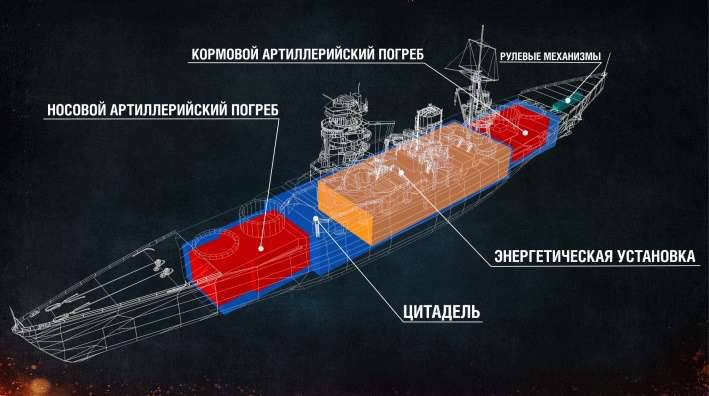 Why fuss numerous 60-mm crossbeams and citadels, if these 800 tons can be spent on solid 60-mm side protection (length of the citadel 100 m, height of the belt 8 m) and two crossheads, closing the citadel.

Otherwise, we arrive at a paradoxical conclusion. Only 700-800 tons (10% of the standard displacement of a modern destroyer) is enough to ensure complete protection of both sides, from the KVL to the upper deck. With the thickness of armor plates 60 mm, which is quite enough to prevent penetration into the hull of any NATO anti-ship missiles (“Outot”, “Harpoon”, “Exocet”) and protect the ship from debris of the downed “Brahmos”.

And how does all this fit in with the conclusions of the same author?

Any attempt to tighten the armor on these volumes leads to such refinement of the reservation that it turns into a foil.

Try nibbling 60-mm “foil” of Krupp cemented steel. With Brinell hardness over 250 units. To make it clearer to you: on the same scale, the wood has a hardness of 1-2 units, a copper coin - 35. Approximately the same ratio have their strength limits.

What is the citadel for? Seafarers have something to protect, except for BIC, UVP and two MO. Offhand:

There is another unaccounted point. In addition to 130 tons of Kevlar anti-shatter protection, starting with the destroyer Mahane, the Yankees install five additional 1 inch armored bulkheads (25 mm) in the hull. The lids of the UVP starting cells are also protected from 25-mm plates.

Now look, what an interesting trick. How many hundreds of tons will be able to save, if you include armor plates in the power body kit?

With regard to the eternal questions of horizontal protection and the possibility of performing a “roller coaster” with a subsequent blow to the deck, did anyone say that the deck always has worse protection than the boards? 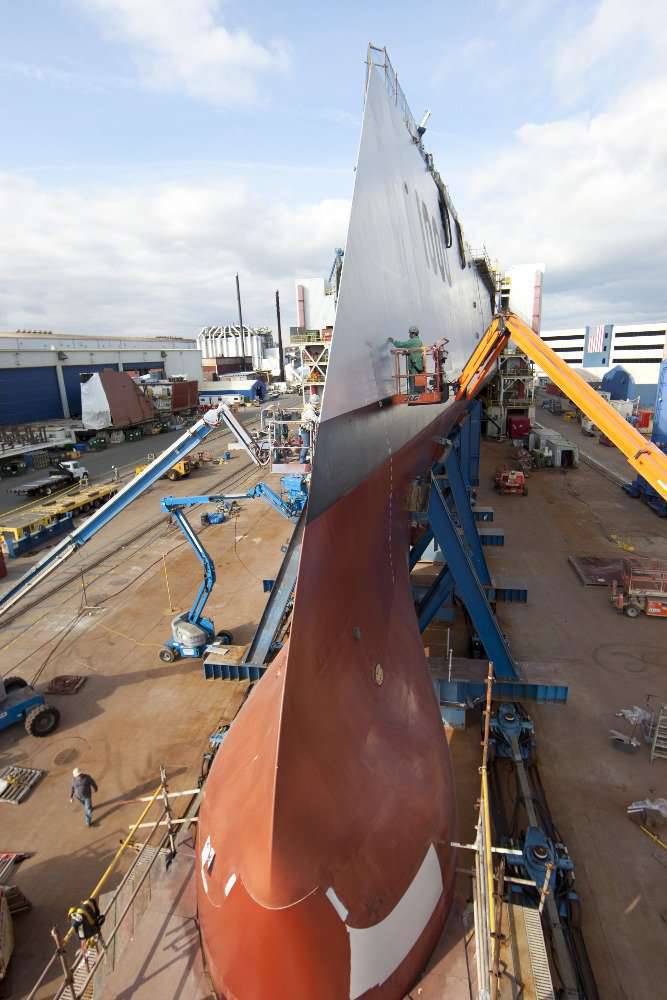 To do this, it is enough to provide a side cover, which will automatically reduce the deck area. And just re-design the ship. By the way, the “slide” maneuver itself is not sugar either, its implementation is possible only at subsonic speeds.

Examples with “Atlanta” and “Arly Burke” are initially incorrect. The creators of these ships did not expect to establish constructive protection, and all attempts to calculate armor have no meaning. For this, I repeat, you need a new ship. With a different layout (similar to the one in the figure), another extension of the hull and a completely rebuilt superstructure.

As for the dispute about the percentage ratio of armor protection in articles of the load of the ship, it is also not worth the candle. All examples with “Tashkent”, “Yubari”, etc. are incorrect. Because the load clauses are a variable function. And it depends on the priorities of the designers.

The French cruisers “Dupuis de Lom” and “Admiral Charnay”, with a displacement of 4700 and 6700 tons, carried 1,5 tons of armor (21% and 25%, respectively). Regarding the volume to accommodate the electronics - show the modern frigate with three steam engines, armored KDP, towers (with 200-mm protection) and crew 500 + people.