March 23 2016
28
Today weapons Exhibitions are not just an opportunity to get acquainted with the latest products of famous brands, but also to look at models of weapons that you will not find on store shelves, to get to know companies from all over the world. The IWA 2016 exhibition, held in German Nuremberg, which is the largest arms exhibition of the Old World, presented visitors with such an opportunity. One of the exhibits of this exhibition, which arouse genuine interest, was a rather peculiar store pump action shotguns under the SHOOT trademark, produced by the Lebanese company JOSONS.


JOSONS was founded in Lebanon by entrepreneur Joseph Abi Zemaan in 1975 as a trading company, its main activity was the distribution of hunting weapons, ammunition for it and related equipment, as well as goods for outdoor activities and tourism. Hunting in this country, which is famous for its cedar forests (it is not for nothing that Lebanese cedar is present on the flag and the coat of arms of the state) is a traditional and very popular occupation, so the company managed to develop quite quickly and soon took a leading position in this area, not only at home, but also throughout the Middle East. Moreover, having started its business with the sale of goods from other manufacturers (Beretta had the largest representation in the company's product range), this Lebanese company eventually switched to producing its own products, which are manufactured under the SHOOT brand. Today, under this brand not only hunting original compact pump guns are produced, but also clothing and footwear for hunting.

Pump-shotguns are known for a long time, this scheme was invented and patented by the American inventor Christopher Spencer in 1882, and later developed by John Moses Browning, who created a fairly well-known model of the weapon - the Winchester Model 1893 / 97 shotgun. This five-shot pump-action shotgun was produced in the United States and after the death of Browning himself, production was stopped only in 1957, with copies of these weapons being made in the world to this day. The term “pump” itself implies a weapon that is reloaded by longitudinal movement (distortion) of the forearm at the expense of the strength of the shooter’s hand. This means that unlocking the shutter of the weapon, removing and ejecting the spent cartridge case, cocking the pistol and releasing the next cartridge from the magazine is carried out when the forearm moves backwards (towards itself), and the cartridge is sent into the chamber and the barrel is locked forward (away from itself) .

The Lebanese SHOOT pump-action shotguns are available today in two basic versions: with an under-barrel tubular magazine or a box-shaped magazine in 12x76 and 12x70 caliber, respectively. The first option can be called a classic. It has versions with a polymer single box and a folding butt, a weapon available with three barrels of different lengths: 530, 680 and 730 mm. The second version with an added box magazine designed for 5 12x70 cartridges, a pistol grip and a folding butt equipped with not such long barrels: 245, 300 and 370 mm. The use of such short barrels makes the weapon very compact. The total length of the weapon with a folded butt is only 510, 570 or 640 mm, respectively. In this case, the mass of the gun in this version ranges from 3,08 to 3,455 kg. Unfolded butt leads to an increase in the length of the weapon on the 220 mm. In general, it can be noted that the weapon is very compact and easily transportable, which is quite an important parameter if you are going to use it in self-defense, especially when traveling to the country in your car. 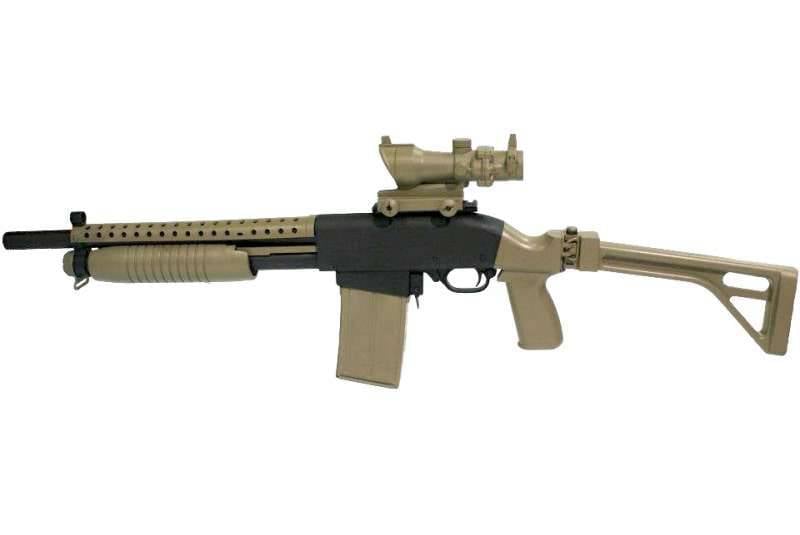 A small-sized version of a pump-action shotgun with a box magazine and a folding butt — in the JOSONS catalog simply means SHOOT Pump Action with Magazin (there is no model index) — apparently it is quite popular in the Middle East. The weapon is represented, at least in 6 versions, which differ from each other in the length of the forearm and configurations (for example, the fore handle can be attached to the forearm), as well as very diverse camouflage options, among which there are quite exotic ones. Weapons can be presented in the following camouflage colors: Olive Green (Olive Green), Light Gray (Light Gray), Beehive (Snake Scale), War Fence, Brown Beige (Beige Brown), and others. As you can see, in the fantasy of the appearance of the weapons of the Lebanese company can not refuse. The presence of unusual, even futuristic camouflage is aimed, first of all, at the eastern buyer, who pays a lot of attention to the external surroundings of any weapon.

The option of a magazine pump rifle equipped with a perforated receiver casing, which gives the weapon a certain external resemblance to submachine guns of the period between the First and Second World Wars, looks quite charismatic. And if an interface system with mounting strips is installed on the top of the receiver, the shooter can transform his weapon into a true “space blaster” by installing a different kit on it - tactical lights and target indicators, a collimator sight, spare magazine holders and much more. The practical need for a wide tactical body kit of smooth-bore pump guns can hardly be called particularly justified. Rather, the only purpose of a body kit may be the psychological effect that it can have on the attacker, and, of course, the buyer himself, especially during exhibitions. 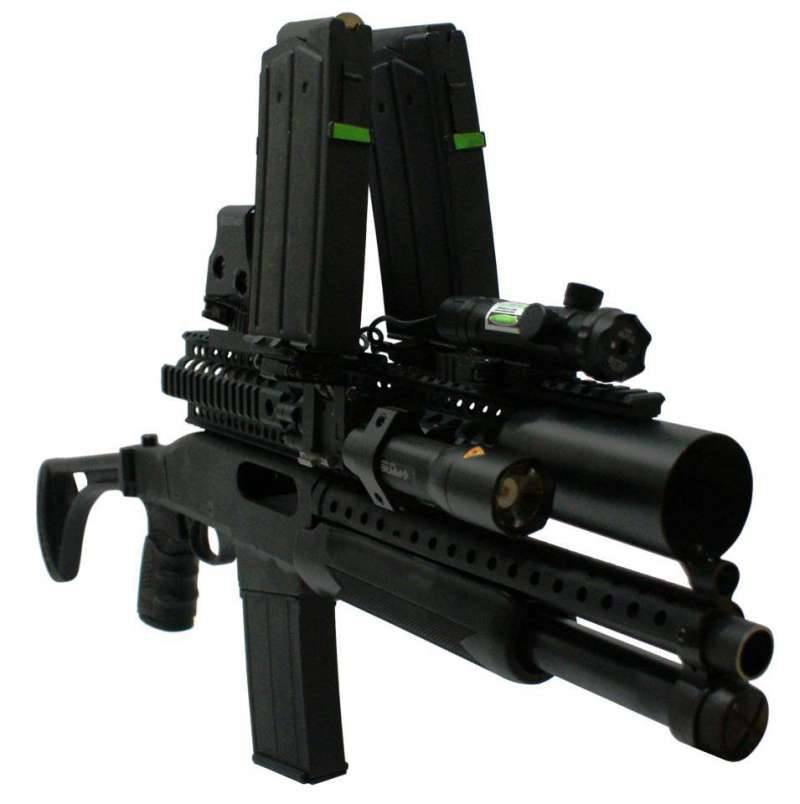 A box-shaped sector magazine, a perforated steel casing, a pistol grip and a folding butt give the SHOOT pump gun a strong resemblance to real military weapons. Such a move is not surprising for the restless Middle East region, where today there is a very high demand for self-defense weapons. This tactical appearance of these pump-action shotguns is consistent with the specifics of the local market and the mentality of residents who buy weapons not so much for hunting, but for home and personal self-defense. According to experts, for the market of the countries of Central Europe, as well as the USA (with the exception of lovers of exotic arms, which are everywhere), this Lebanese weapon is unlikely to be interesting. But for the countries of the former USSR and the third world countries, in which there are no restrictions on the length of smooth-bore weapons or after modification, which excludes shooting with a folded butt, JOSONS pump-action rifles can find their consumers.

In general, smooth-bore pump guns are very popular in the world today. At the same time, they are not only a weapon of self-defense and lovers of practical shooting, but also a favorite small arms of law enforcement officers. For professionals, shotgun blast guns are a versatile weapon that can be used for a variety of tasks. For example, non-lethal ammunition filled with rubber or plastic bullets can be used to curb riots and hooliganism. For the same purpose, light-sound, gas grenades can be used, thrown with the help of special muzzle nozzles. 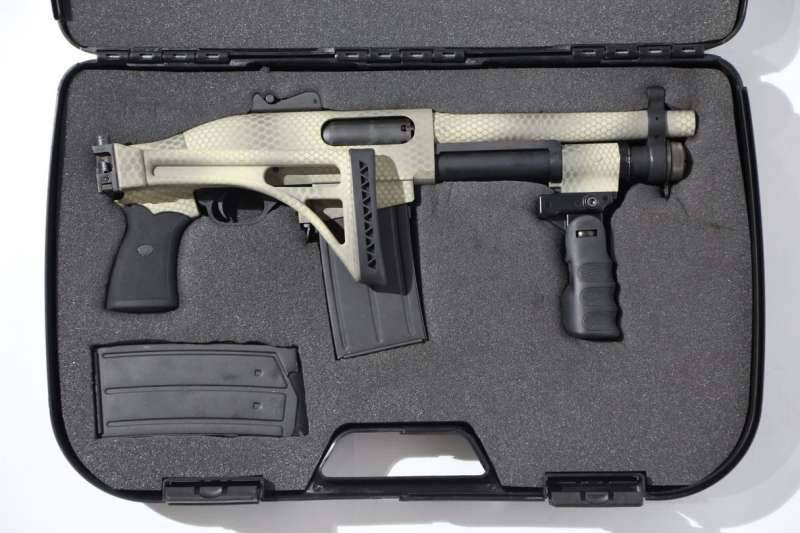 For nonprofessionals, pump guns are the perfect means of self-defense. Having stores on 5-8, and sometimes 10 cartridges, any, even poorly trained shooter, will feel calmer and more confident in the stressful situation of repelling an attack. It is important to understand that the state of the arrow directly affects the results of the shooting. The reliability of the pump-action shotguns is ensured by a comparatively simple design and the presence of a manual drive of the weapon mechanisms, which makes it possible to eliminate the influence of ammunition on the process of reloading weapons, unlike self-loading rifles.

Pump-action shotguns have other advantages. The effectiveness of rifle fire largely depends on the power of the ammunition used. In this aspect, pump action shotguns are not inferior to anyone. According to this parameter, only combat rifle cartridges and a number of cartridges for hunting carbines can be compared with them. The muzzle energy of a bullet fired from a 12-gauge gun is 3000-3500 J, the energy of the shot charge is 1500-2500 J. For comparison, a very common Makarov pistol boasts a muzzle energy of a bullet of only 300 J. Research conducted in the USA (by journalists of the publication Guns & Ammo have demonstrated that the Federal's 12-gauge (35g) lead bullet has more penetration than the .44 Magnum revolver (15,5g) bullet, which has a very formidable reputation.

At the same time, the inevitable price for the possibility of using powerful cartridges with pump guns was recoil. When conducting long-term shooting, she is able to tire the shooter very much and, as a result, will adversely affect his accuracy. However, the majority of collisions at short distances, at which smooth-bore pump guns are used, are rather fleeting. In such situations, the negative impact of a significant impact on the shot is much less pronounced and is quite portable. Another factor that makes pump-action smooth-bore guns such popular in circulation and frequent guests of exhibitions is the use of ammunition with several striking elements (canister, shot). When firing such ammunition, the density of fire can be comparable to the fire from submachine guns.