The expert community and politicians are actively discussing the withdrawal of the VKS group from Syria announced by our president. So far, emotional assessments of what happened are dominant. Meanwhile, this step is important to give a very balanced assessment.

First of all, it is worthwhile to dwell on the form of promulgation of the decision, that is, to consider it as an informational action. Judging by the statements of official representatives, unexpected for all, it was in fact carefully prepared and only announced suddenly that it served as a high degree of independence of our political elite from outside pressure, the ability to give momentous orders without paying attention to external players. However, understanding this step, taking into account the history of our participation in the war in Syria and the current nature of the armed struggle, shows that the decision was immediately unclearly formalized for submission to the media. Hence the first impression of the haste of the withdrawal of the troops and the subsequent attempts to smooth it out. Much more advantageous would be the scenario with a preliminary justification of the expediency of such a step. Then the decision would look like a pre-calculated and prepared.

On the information front

What has been achieved as a result of the semi-annual joint actions of the Russian Aerospace Forces and the Syrian army? According to official data, 8,3 percent of the area occupied by the IG and other terrorist groups banned in Russia has been released. Yes, most of the land they captured is desert. But this is the territory of Syria. And key cities, the liberation of which was considered a priority, remained with the enemy, in particular Idlib. Moreover, the capture of this city would have allowed to crush the entire northwestern group of terrorists in the future. Rakka remained in their hands. Not released until the end of Aleppo. Unable to cut the communications, which is supplying terrorists from Turkey. That is, the only task that was completely resolved was the salvation of the legitimate authorities in Syria from collapse. This is a huge political and strategic success. However, it is not final - the enemy is not defeated, but only pushed aside and has the strongest support of at least the monarchies of the Persian Gulf. And the United States and its allies in the anti-Igilov coalition are not eager to finally put an end to this evil, rather pursuing the goal of taking control over than defeating. Therefore, the revival of the military power of the IG is a matter of time, and relatively short.

To achieve the decisive superiority of the Syrian army, even with the support of the Russian grouping of the VKS over the armed forces of the IG and other terrorist formations has not yet succeeded. This conclusion follows from the fact that the daily advancement of government troops in recent weeks has remained very insignificant - in some areas, at best, a mile and a half. Militants sometimes went on the counteroffensive. The task of isolating the Aleppo grouping of the enemy from Turkey has not been solved; after the short-term success of the Syrian army, the enemy was able to restore the situation. And this means that a significant reduction in the activity of the Russian VKS in Syria will lead to a parity of potentials between government forces and terrorists, and in the worst case, the latter will receive even a slight, but superiority.

The psychological effect of the announced decision on the fronts is also important. Even despite the intensive political work in the government army, its moral-volitional potential will most likely be weakened. In contrast to this, the agitators of the terrorists will explain what exactly the IG "ousted" Russia from Syria. Already voices are heard, including in the press, that we are leaving, allegedly fearing gangster MANPADS, from which MiG-21 was shot down. Professionals understand that this is nonsense. But the man in the street and the more militant IG believes in it. The result may be the acquisition of an adversary of moral and psychological superiority, which will inevitably lead to a fatal outcome for Damascus.

The question arises: what, it was necessary to remain in Syria, in fact, in an impasse, which can last long enough? I will answer: as early as the beginning of the operation, I, as a military specialist, being a staunch supporter of support for the legitimate government of Syria, did not consider the chosen method of providing this assistance effective.

Firstly, the decision on the military operation was taken late, when the situation was already on the verge. Begin Russia to render more ambitious assistance than it was done — with supplies of military equipment and ammunition, by military experts a year and a half earlier, no disaster would threaten Damascus. But for Russia, both terrorist expansion and the likelihood of losing the European market were obvious, build Qatar through a gas pipeline controlled by Islamist Syria. Nevertheless, the case was brought to the point that I had to act in fire mode. The question arises about the competence and even professional suitability of the staff of those analytical centers that provide top political leadership. 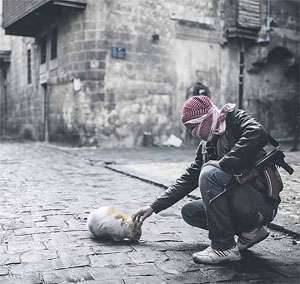 Secondly, if a decision has been taken on military intervention, then the forces attracted for this should be sufficient to ensure a decisive change in the course of the hostilities. In Syria, on both sides acted groups corresponding to the size of the front-line scale. Therefore, the introduction of the essence of the regimental contingent, albeit superbly trained, could not fundamentally change the balance of forces in principle. Yes, thanks to the dedicated work of our personnel, who acted with exorbitant stress, they managed to prevent a catastrophe. But to ensure victory over the IG and other terrorists by such forces is impossible.

According to my estimates, to achieve victory, the number aviation groupings in Syria should have been increased to 120–150 combat aircraft and 50–60 helicopters. Let it be impossible at the first stage of hostilities. However, in the future, such a task was probably not even set. What prevented - one can only guess. The pressure of the West probably affected the limited possibilities of transit to Syria of the material and technical means necessary to support the activities of our group, the lack of trained pilots (the “Admiral Kuznetsov” never took part in the hostilities in Syria, and, apparently, the main reason as times in the frames of deck pilots), the deficit of the WTO.

If our leadership decided not to attract its own troops, then it was necessary to create a group of 50 – 60 thousand people strong enough for a decisive offensive. These forces, given the tens of thousands of fighters of the Kurdish militia and Hamas, are enough to defeat the IS and other opponents of the legitimate government of Syria. They are hampered by an insufficient level of training of commanders, weak interaction, especially between the Syrian armed forces and other formations, as well as an acute shortage weapons, ammunition and fuel for military equipment. The supply of weapons and military equipment in sufficient quantity for conducting intensive large-scale offensive operations, full-fledged assistance in organizing hostilities would ensure the defeat of the IS and other terrorist organizations in a short time. No one bothers to help send Russian volunteers to Syria who, with proper government support, may find several tens of thousands (let us recall the scale of the volunteer movement in the DPR and the LPR), which would be enough to tangibly affect the course of the war.

Admittedly, today the Syrian army is not fully prepared for independent successful offensive actions against the IS and other terrorist groups. Based on this, given the existing restrictions on building up the Russian group, it would probably be advisable to leave our troops in Syria until the government army has the potential to conduct successful offensive operations. The time when our group’s withdrawal would be painless would be for the Syrian army to have the opportunity to advance at a rate of about three to five kilometers per day.

There is an opinion that after reconciliation with the “moderate” and even “patriotic” armed opposition, the Syrian army’s enemies have diminished and it can, by concentrating against the terrorists, gain the required advantage. However, if we compare the potential of jihadists and "moderate", the gain from such a reduction of enemies is small. The Islamists are five to six times larger. They have much higher ideological incentives and personal and commanding personnel training. Moreover, with the announcement of a truce, many Islamist militants began to diffuse into the ranks of the "moderate", turning the latter into radical opponents of legitimate power. Yes, and the "arms folded" themselves, having received a breathing space and confidence that Russian aviation would not bomb them, it is possible that even on the recommendation of western and eastern patrons, they can calmly break the agreement. So hope for them is not particularly worth it. The two previous truces in Syria, which prevented the complete defeat of the terrorists, led to the catastrophic situation that we had to settle.

Year of Damascus in Russia

In conclusion, we will evaluate the consequences of the decision taken for Russia. It is clear that they will be completely and completely determined by the development of the situation in Syria. There are only two options. The first one is favorable for our country and Syria. As a result of massive support from Russia, both in the military-technical and politico-diplomatic respect, the Syrian army will gain decisive military-strategic superiority over its opponents and will be able to defeat their opponents within a reasonable time (maximum of a year) by deploying more successful offensive actions or less high pace. The second is unfavorable. Under this option, the Syrian army is not ready to crush terrorist groups on their own due to insufficient equipment, a decline in moral and psychological potential, and other negative factors.

At the first, favorable option, the authority of our country and its leadership will increase significantly - the population in Russia and abroad (despite the anti-Russian propaganda, although it does come to even Western people) will consider the decision on the withdrawal of troops as a subtle and insightful move directed to manage the situation in a direction favorable to us and to Syria itself. The authority of Moscow will increase significantly, its positions in the Arab world (recognizing only strength) will strengthen, as well as President Putin himself, whose actions will be perceived as a demonstration of not only effective strength, but also political wisdom. Western partners will be more careful in their actions. They will understand that the Russian leadership is capable of extraordinary, but carefully worked out and therefore particularly effective actions with which they cannot oppose anything significant, at least as an immediate reaction (and the time factor in politics is key).

When a situation evolves according to a negative scenario, the reaction will reflect the idea that the Russian leadership is subject to external pressure and cannot make informed decisions, acting spontaneously in acute situations. Accordingly, the influence of Moscow in the Arab world will decline. Western politicians, considering Russia vulnerable to personal pressure on political leadership, will increase the impact on our elite, using economic and other levers. Liberated perk. The patriotic opposition will respond sharply.

So we can safely say: after the decision, the fate of Russia will be decided in Syria.

Ctrl Enter
Noticed oshЫbku Highlight text and press. Ctrl + Enter
We are
A great interview with Sergey Lavrov: about Ukraine, Obama and IranMilitary reform as an integral part of the security concept of the Russian Federation: Systematic dynamic assessment
Military Reviewin Yandex News
Military Reviewin Google News
33 comments
Information
Dear reader, to leave comments on the publication, you must sign in.