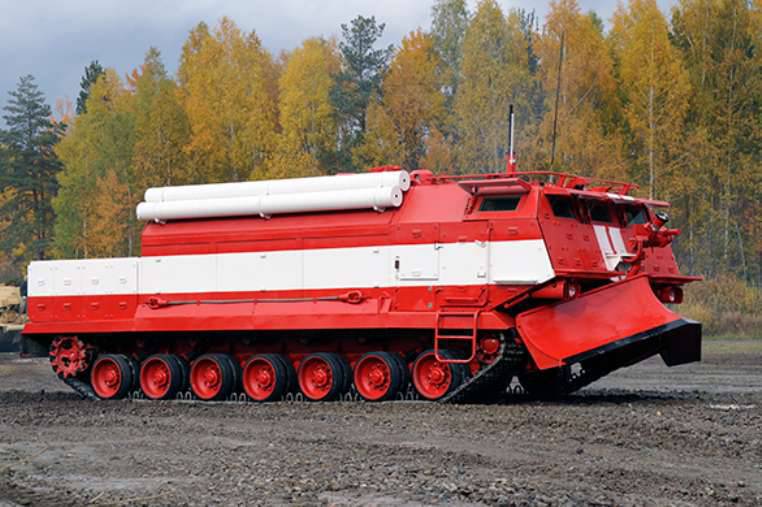 “The machines have successfully passed the test cycle and received a positive conclusion on all parameters. According to the terms of the contract, the equipment should arrive at its destination at the end of March, ”the release says.

It is noted that SPM was developed by the Omsk plant in 2012. “In September, 2013 was first publicly presented at the Russia Arms EXPO International Exhibition in Nizhny Tagil, where a unique function of SPM caused special interest among specialists - working in remote control mode , without crew ", - told the press service.

In 2015, the PMT was accepted for supply by the RF Ministry of Defense.

According to the manufacturer, “the machine is designed to extinguish fires and conduct rescue operations at arsenals, warehouses and storage bases for explosive substances, clearing aisles to fires, laying firebreaks during forest fires”.

The uniqueness of the SPM is that it “was created using units and assemblies tanks T-72 and T-80, and the presence of an armored cockpit allows you to increase the protection of the crew from the effects of adverse external factors, ”the report said.

Ctrl Enter
Noticed oshЫbku Highlight text and press. Ctrl + Enter
We are
The action “Military service under the contract is your choice!” In Rostov-on-Don: future contract servicemen, exhibitions and “Russian Knights”Rogozin visited Nizhny Tagil, shot from a tank and a gun
Military Reviewin Yandex News
Military Reviewin Google News
26 comments
Information
Dear reader, to leave comments on the publication, you must sign in.