March 23 2016
67
The newest Russian project of the Armata universal tracked platform, on the basis of which it is proposed to build several types of combat vehicles, continues to haunt the minds in our country and abroad. Industry and the military are in no hurry to disclose all the information about the new project, which is why any fresh news leads to very interesting results. Thus, the foreign press cannot go past the news about the new Russian project.


Among other things, the American edition of The National Interest responded to the latest news about Armata. On March 13, it published an article by Dave Majumdar titled “Surprise: Russia's Lethal T-14 Armata Tank Is in Production” (“Surprise: the deadly Russian T-14 tank“ Armata ”went into production”). The author of this publication reviewed the latest news about the latest Russian project, and also noted some of its features.

D. Majumdar begins his article with a statement of fact: the newest Russian main battle tank T-14, created in the framework of the Armata project, has already entered production. Last year, several such combat vehicles were shown during a parade on Red Square on Victory Day. At that time, most foreign analysts believed that the Armata family of vehicles was still in the development and development stage. Nevertheless, as follows from the latest statements by the leadership of the Russian industry, the new equipment has already gone into series. 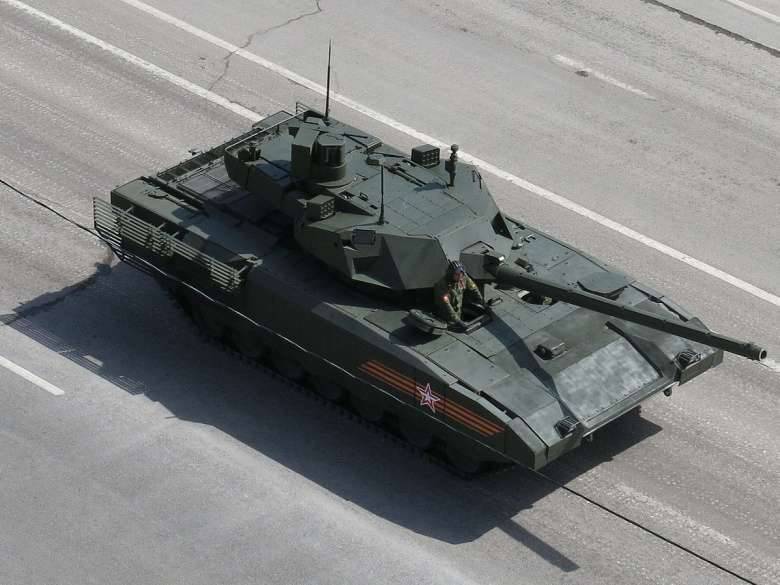 The author of The National Interest recalls that the new information on the progress of the promising project was disclosed by the head of the Rostec state corporation, Sergey Chemezov, in his recent interview for The Wall Street Journal. In the course of the interview, American journalists raised the question of the influence of economic problems on the course of new projects. The head of "Rostec" noted that the equipment of the Armat family is already being produced in series.

S. Chemezov said that due to economic difficulties a decision was made to suspend work on new projects. Already started development, in turn, will be brought to a logical end. The management of the industry does not see the point in stopping these works, since such a decision will not allow to get the expected results, as well as lead to large financial losses. Thus, all started projects will be completed, and only some promising ones will be reduced.

D. Majumdar recalls that, according to open sources, the Armata family of vehicles includes the T-14 main tank, the T-15 heavy infantry fighting vehicle, and the T-16 armored recovery and recovery vehicle. In addition, the appearance of some other models of military equipment on a unified chassis is expected. So, there is evidence of the appearance of a sample that has already been called the “killer tanks". While the main T-14 tank receives a 125-mm 2A82-1M gun, the promising Tank Killer should carry a 152 gun. It is likely that this gun will be based on the weapons of the 2C35 Coalition-SV self-propelled gun.

Last year, the TV program “Military Acceptance” of the Zvezda channel showed for the first time a new technique, both outside and inside. In particular, the authors of the program were allowed to show the interior of the habitable compartment of a promising tank. Such shootings made a great impression on domestic and foreign specialists.

As the author of The National Interest notes, the published shots clearly demonstrate the placement of a crew of three in a common capsule, isolated from other units of the tank. Crew workstations are equipped with various instruments, including touch screens that simplify management. The interface of the tank control systems and its systems looks simple and intuitive. In addition, there is reason to believe that the new tank received communications and control equipment, which allows receiving and transmitting information about the situation on the battlefield. Finally, satellite navigation systems are used.

One of the most interesting features of the promising tank T-14 "Armata" D. Majumdar calls the new complex of active protection "Afganit". According to available data, the active radar with electronic scanning is included in this system, providing observation of the entire surrounding space. Also, the system should include electronic warfare equipment and optical-electronic suppression. For the destruction of approaching enemy ammunition is proposed a separate element of the complex. On the tower of the combat vehicle are mounted several launchers for shooting protective ammunition. According to some data, the use of ammunition, forming the so-called. shock core.

The active protection complexes show the greatest effectiveness when working against an ammunition with an explosive charge (anti-tank grenades or missiles), whereas kinetic projectiles are a more difficult target. The use of the shock core suggests that the "Afghan" with the same success will be able to deal with both cumulative / high-explosive and sub-caliber armor-piercing projectiles.

Referring to the directory The Military Balance 2016, D. Majumdar notes another important feature of the T-14 project. The compilers of this handbook believe that the most revolutionary innovation of the new Russian project is the use of a completely uninhabited tower. In addition, emphasis is placed on remedies, including active ones. When creating a complex of protection was used the existing experience of combat use.

In case of adopting the T-14, the Armata will be the first main battle tank in the world equipped with an uninhabited fighting compartment and an active defense complex. Analysts suggest that widespread active protection will reduce the effectiveness of rocket launchers and anti-tank missiles, as well as reduce their role on the battlefield. Thus, the growing importance of artillery systems of tanks and other equipment will be provoked.

Nevertheless, D. Majumdar considers stealth as the best way to survive on the battlefield. In this regard, as noted, the Russian designers have achieved some success. It is already clear that the project "Armata" provides for a significant reduction in the visibility of armored vehicles for radar and thermal imaging detection. Thus, the task of detecting and tracking combat vehicles becomes more complicated.

If the armored vehicle is still able to be detected, then the enemy enemy projectile will have to first overcome the active defense complex. Then he will face a new dynamic protection such as "Malachite." Finally, the last line of defense is combined armor. The composition of the armor protection of the body "Almaty" is still classified, but D. Majumdar believes that in its composition are used ceramic elements. Also part of the units of armored vehicles are covered with screens to protect against anti-tank weapons.

The Russian project of a unified platform for the construction of various equipment has already become a cause for concern for foreign experts. To date, some plans have been announced for the development of armored vehicles, which should lead to a response to the T-14. So, Germany launched a modernization project for the Leopard 2 tank with the installation of a new 130 caliber mm gun. In addition, the German industry plans to begin developing a completely new tank MGCS (Main Ground Combat System - "The main ground combat system").

As you know, the staff of The National Interest, as if proceeding from its name, show great interest in new Russian projects in the field of armaments and military equipment. For this reason, they do not disregard any more or less significant news. The statements of S. Chemezov about the production of the newest main tanks T-14 did not go unnoticed either. In addition, as always, some general features of the project were considered and certain conclusions were made.

It should be noted that such a reaction of the foreign press can hardly be surprising. Since the announcement of the start of work on “Armata”, foreign media began to regularly cover this project, and the demonstration of several tanks of the first batch had a great effect. The echoes of the furore, superimposed on the new messages about the progress of the project, still lead to the appearance of publications similar to the latest article in The National Interest.

Positive reviews of foreign media about Russian developments are often a cause for suspicion. Indeed, such publications may well be part of a specific plan for the defense industry of third countries. Talking about the high rates and, importantly, the dangers of the newest Russian armaments and equipment, the foreign press can help promote some developments in the domestic industry. In other words, the press provides the necessary information background and “prepares” responsible persons, and the industry offers its own projects, which, however, need government funding. As a result, companies receive financial support, and states renew the material part of the troops. And all these processes are submitted in the guise of a reaction to a potential threat.

Although such publications are intended for an “internal consumer,” they are of great interest to other readers. With their help, you can imagine what impression Russian developments have on foreign specialists. Moreover, to assess not only the general impression, but also the fears associated with the future production of these developments. From this point of view, new publications in foreign media look extremely interesting and informative. Thus, it makes sense to follow the enthusiasm and fear of foreign experts - this will allow you to find out the current situation and to anticipate some events of the foreseeable future.