Turkey as a “hot spot”

March 23 2016
25
Turks will soon run to the EU countries in the same way as Syrians run there. And then Erdogan’s blackmail against Brussels will stop working. Moreover, Turkey will soon turn into Syria, some observers say. And why, actually, no? Erdogan is not a politician who is interested in calm, and the Kurds are not those who will sit back. Expected result: Turkey will become a new “hot spot”. 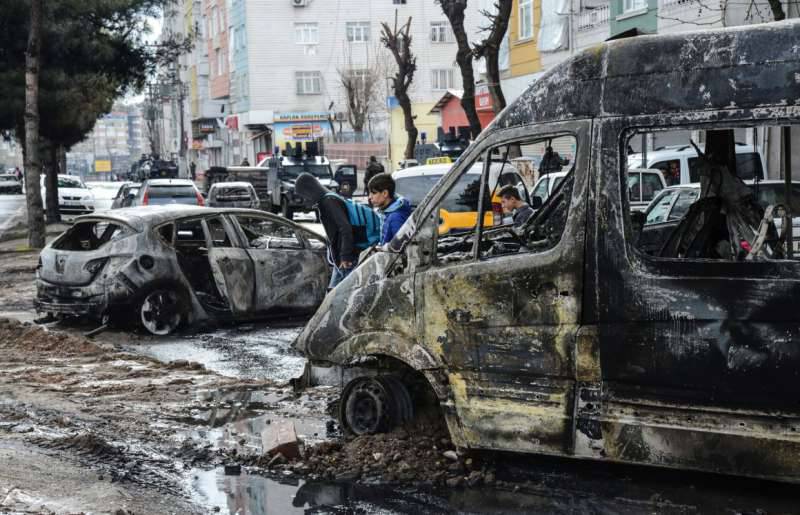 As Zia Weise writes in a report from Turkish Diyarbakir, published in a major publication "Politico"due to hostilities historical the center of Diyarbakir, the largest city and de facto capital of the Kurdish southeast of Turkey, has simply turned into ruins.

Find out this city is no longer possible. Narrow alleys are littered with debris. Smoke rises from the burnt houses. Some houses collapsed completely, and even folded overlapping panels on top of each other. It all looks “like Syria,” say the locals.

But this is not Syria! This is the historical center of Diyarbakir, and the Turkish military spent here its “operation” for four months.

A resident of the city named Senai and her four children in December 2015 left their homes, unable to endure life "in the midst of violent clashes." The walls of their house in the old town of Diyarbakir were beaten with bullets. True, these walls survived.

“We took some clothes for our children and ran away. Now there is nothing left, ”she says.

Senai is only one of the hundreds of thousands of people who fled from the hostilities that are being fought in the southeast between the state security forces and the militants of the Kurdistan Workers Party (PKK) banned in Turkey.

This military violence is almost neglected in Europe, anxious to curb the flow of refugees from Syria and Iraq. But after all, the conflict in Turkey threatens to turn part of this country into a “version” of Syria.

How did the conflict begin?

The ceasefire “collapsed” in July, and the conflict gradually grew from a situation of revenge on the ancient principle of “an eye for an eye” into a full-fledged urban war. The peace process, which lasted two years, has gone down in history.

It is clear that the local residents are experiencing the brunt of the fighting. In Cizre, the south-eastern part of the city, according to local politicians, 120.000 residents of 100.000 have already become refugees. Half of the district is simply destroyed, it is impossible to live in another part. A representative of the Turkish Human Rights Association visited the city two weeks ago and said that the destruction here resembles the devastation in Kobani (a Kurdish city in neighboring Syria).

Nevertheless, the EU refrains from criticizing Ankara’s military campaign against the PKK, trying to ensure “Turkey’s cooperation in a refugee crisis,” the newspaper notes. Both Turkey and the EU consider the PKK a terrorist organization, although many of Turkey’s allies (including the US and several EU countries) still support the PKK’s Syrian affiliate YPG (support the PKK’s Syrian affiliate, the YPG), since the participants of this movement are “ at the forefront of the fight against the "Islamic State".

In addition, last Friday, European leaders signed an agreement with Turkey, which they hope will lead to a reduction in the flow of asylum seekers into the EU and will “calm” the refugee crisis that the EU is experiencing for strength.

Erdogan’s critics have repeatedly accused the EU of deliberately ignoring the war unleashed by Ankara in the Kurdish southeast and in suppressing the resistance caused by the violation of civil rights. Local representatives of the press (for example, “Cumhuriyet Dündar”), who are listed as “spies” by Erdogan, accuse the EU of giving Brussels its “principles” for the sake of short-term gain. Cumhuriyet Dündar is the last of Turkish newspapers that still dare to speak out against the government. Erdogan has already laid a paw on the best-selling daily in Turkey, Zaman.

Freedom of speech is under threat. Journalists, scientists, activists and lawyers who criticize a military operation in the southeast are accused of spreading "terrorist propaganda." Only last week, three scientists were detained on charges - after they called for a cessation of hostilities in the southeast.

According to the Ministry of Health of Turkey, around 355.000 people have been displaced from conflict areas since December. According to information from the EU, their number is at least 400.000.

Kurds know what's going on. History repeats itself. The confrontation between the PKK and the Turkish government in 1990-s led to a massive displacement of civilians in south-eastern Turkey: from 2 to 3, millions of civilians left their homes. Some left voluntarily; villages of others were destroyed by government forces.

Sibel Igitalp, a member of parliament who represents the Kurdish HDP party in Diyarbakir, says: “People have lost their homes, people are being killed. All European countries know that this is because Turkey is playing the refugee card, but they don’t say anything. ”

“What kind of assistance can the state provide to refugees if it kills its people, if it creates refugees in its own country?” - asks Sibel. “If the Kurdish conflict turns into a war, does it (the state) not think that both the Turks and the Kurds can eventually run to Europe too?”

However, they are already running.

Last month, 12 Turkish Kurds crammed into a group of Syrians and Afghans who were trying to swim to Greece. Turkish media reported that these people told about their attempt to escape from the "terror" in the south-east.

The Middle Eastern fire, in which R. T. Erdogan, who called B. Assad a "butcher" and a "murderer" and sponsored an "opposition", took such an active part, turned to the side of the arsonists. Now President Erdogan, who finally dropped the secular mask and appeared in the form of a tyrannical "neosultan" and "neo-osmanist", is reaping what he has sown.

Turkey will soon become deserted: this is shown by both new flows of refugees and the refusal of tourists to go to various Turkish cities. In press quite a few photos deserted Istanbul streets. And this, by the way, is openly written in Europe, including in the EU “locomotive” - Germany. Tourists are afraid of instability, unrest, new terrorist attacks and everything else that is now closely linked to the methods of government and the external and internal policies of Erdogan.

Turkey, led to a bright future by such a king, has every chance of becoming a new “hot spot” of the planet.

Observed and commented on Oleg Chuvakin
- especially for topwar.ru
Ctrl Enter
Noticed oshЫbku Highlight text and press. Ctrl + Enter
We are
War in Turkish KurdistanTurkey against the Kurds. Is there a new phase of conflict ahead?
Military Reviewin Yandex News
Military Reviewin Google News
25 comments
Information
Dear reader, to leave comments on the publication, you must sign in.