Putin cuts a window to China

March 23 2016
77
Rare occupation can unite in a single impulse liberals-Westerners and turbo-patriots. However, they both get some indecent pleasure in publicly discussing the “failures” of the Russian president’s foreign policy. Recently, the plot “China has thrown Putin!” Has become a real hit of this trend of pseudo-analytical folklore. Oh, lo! And we warned! 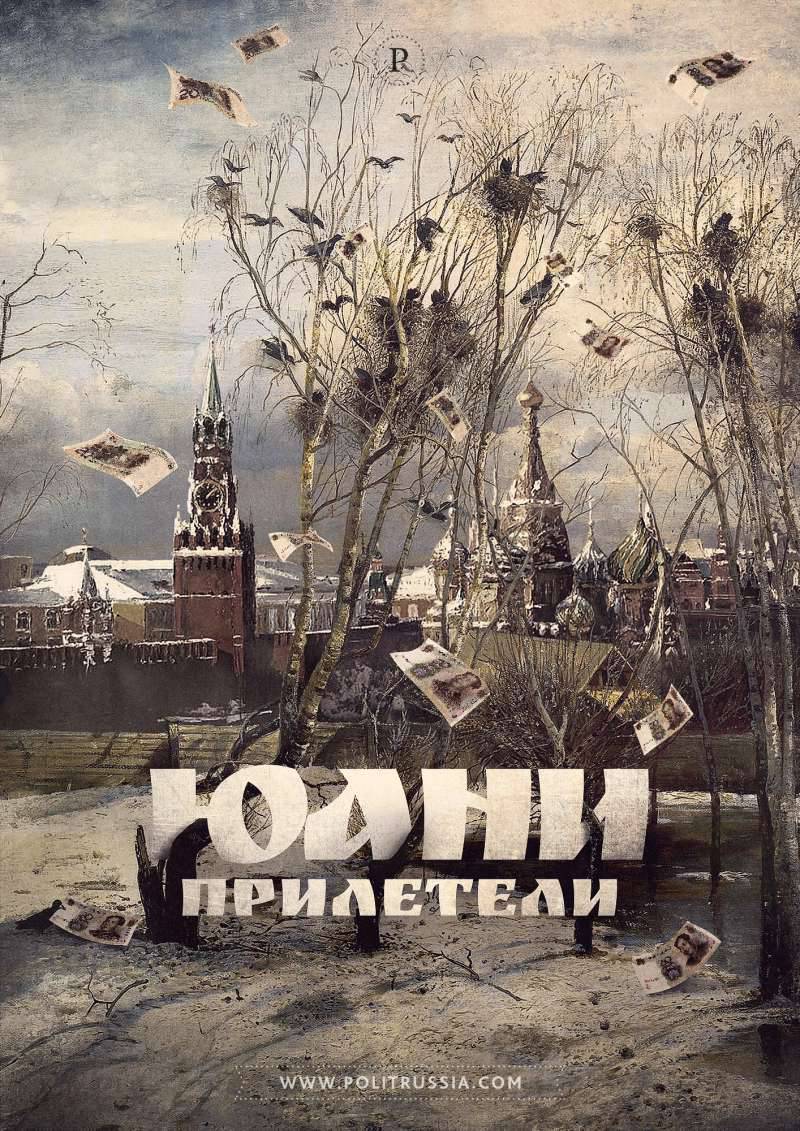 Both liberal and pseudo-patriotic media and authors savor a decrease in trade with China, as well as the apparent absence of serious financial injections from Chinese banks into the Russian economy. From this a solemn conclusion is made that Putin’s turn to the East has failed. This statement makes their target audience just a storm of delight, but it does not correlate with reality.

There are three popular theories that explain why the Russian economy has not yet been flooded with cheap Chinese loans.

Theory One: “Beijing is a servant of Washington”

According to this theory, which is equally loved by Russian Westerners and turbopriots, China actually joined the sanctions against Moscow, and therefore the Chinese banks were given an implicit order not to lend to Russian companies, not to develop Russian areas of business and in general to make Washington happy .

The theory fits perfectly into the schizophrenic world of people who deify Washington in the same way that Ukrainians deify Putin. The problem of the theory is that for China, joining sanctions against Russia or, for example, Iran would be equivalent to killing your own geopolitical ambitions.

China has three trumps in foreign policy: money, money, and once again money. If potential or existing partners of the PRC in Africa, Asia and Latin America come to the conclusion that Washington can force China to turn off the crane with the yuan, then the next day Beijing’s political influence in the world will turn into dust. Beijing cannot afford it, and this is well known to all since the days when Beijing continued to buy oil from Iran, which was under UN sanctions, despite the most severe irritation of Washington and Brussels. Actually, the very fact that Iran was able to save the economy, despite the sanctions, is the result of the pragmatic obstinacy of the PRC. The theory of "joining the sanctions" is nonsense and nonsense.

Turbopatriots adore this theory, many of whom for some reason are sure that only behavior in the style of a drunken gopnik can arouse respect among the CCP's mandarins. It is especially funny to read passages in the style of “If Putin Moved Tanks to Kiev, they would respect him and give him money, and so Beijing wrote him off as a weakling and following him. ”

Of course, projecting your own complexes and poor ideas about international politics onto the leadership of the PRC is a very pleasant exercise, but it has no relation to reality. China persistently and consistently, overcoming the enormous resistance of the United States, is building a system of economic interaction and integration with the European Union.

The main foreign policy project of the People's Republic of China at the moment is the “New Silk Road Economic Belt”, which begins in China and ends in Europe! This is a project for communication between China and Europe, and all PRC’s foreign policy activities are set up to promote it, while the US is trying to create the conditions for China’s economic and logistical isolation from the EU. Russia, which cannot be a reliable and protected from US instability bridge between China and the EU, instantly loses for Beijing the lion's share of strategic importance. Well, Kiev would have captured Russian troops in 2014, and then what? Would get a cold war with the EU and a trade embargo in exchange for the dubious joy of feeding at their own expense several tens of millions of dreamers about the European Union and racers in lace panties.

Someone like this exchange may seem like a powerful strategic move, only after that you could only talk about cooperation with China on a kneeling basis, since the opportunity to play a key role in the implementation of the Chinese project “New Silk Road” would be lost forever.

The third theory: "Beijing is waiting for us to do at least something with its economy"

This is a very popular explanation both among liberals and among turbopriots of all stripes and spills. To be honest, it is difficult to understand how in the mind of Karaganov, the intensification of Chinese financing is linked to a change in Russian economic policy. It is clear that many in the Russian elite strongly want to see right now in Russia “structural reforms” in the style of Zhu Rongji, which made millions of Chinese from the public sector unemployed, or pumping the economy with Wen Jiabao-style money, but where is China?

China actively finances projects in very different economies, ranging from the primitive, almost “tribal” economies of Africa to the relatively developed capitalist economies of South America and Southeast Asia. China is attractive to all its partners, which does not force them to carry out economic reforms (whether liberal or anti-liberal), which makes it stand out from the IMF. Chinese conditions: to work with Chinese suppliers and periodically to show a piece to Washington - Russia already now fulfills a bang. Reform is not the case.

And what's the matter?

But the fact is that China is a country with a whole layer of influential officials and businessmen, who can be called “Chinese Grefs”. Due to the ideological downtroddenness of patriotic journalism, which wants to see only the executions and successes of the Communist Party in China, it is customary to ignore the most important fact of Chinese reality - during the years of cooperation with the West and building an export-oriented model of development in the PRC, a whole class of officials and businessmen emerged do not see and do not want to see themselves outside the Western context and for which Comrade X’s nationalistic and independent policies are as allergenic as the return of Crimea is an allergen for p Russian professors of the HSE. In China, it is not in vain that there is a struggle with “naked officials” —that is, officials who brought their children and spouses to the West (and this phenomenon has long ago assumed the scale of the epidemic).

A significant part of the “capital flight” from the PRC, due to which Chinese foreign exchange reserves are declining, is the result of bringing “black” or “gray” money of Chinese officials to the West, who have long transported children to Canada or Australia, put down roots there, business, received citizenship. And what to expect from the generation of officials, who massively looked at the West as a model, despite the fact that many of the current middle and even senior managers were trained in the West? The scheme “stole, taken out, fled to the USA” became so widespread that the return (sometimes in handcuffs) of former Chinese officials to their homeland systematically falls into the list of priority topics of negotiations between Chinese and American leaders. In China, a special agency was set up to hunt for escaped officials, but its pinnacle has not yet instilled fear in the Chinese state apparatus.

Chinese high-ranking "migrants" work in the same areas as their Russian counterparts: finance, economics, state property management, and so on. Every potential “migrant” carefully takes care that there are no factors in his personal file that can prevent his happy old age on the beaches of Florida: he doesn’t offend Tibetans, Muslims respect Uygurs, try to keep quiet about Taiwan, or think about gays - or nothing.

It is logical that the top-down task of “arranging financing” for Russian state-owned companies that go under sanctions or may fall under sanctions is terrifying and panic for the average “Chinese Gref”. Further, this horror develops into a creative search for the reasons why this cannot be done. The task is greatly facilitated by the fact that the same “micro-Gref” comes to the Chinese with the Russian side, only the Russian spill. They will talk about the favorite clubs of the English Premier League; about the success of children who study in the same American universities; discuss the price of US real estate; and then together write reports that joint projects are impossible or risky, or it is better to postpone them indefinitely.

In fact, it turns out that the top leadership of Russia and the PRC are almost trying to force Westerners of the national elites to understand that the orientation to the West has passed and the time has come to work together. It is logical that such attempts will meet both resistance and even direct sabotage.

The Russian and Chinese control systems have one thing in common - both systems work on a “kickboard”, that is, progress is achieved solely due to the attention of the high authorities to a specific problem and the use of the “carrot and stick” method, in which the gingerbread hardened and was beaten performers on the head. This is approximately what we are witnessing at the current stage of development of Russian-Chinese interaction.

The real shock in the financial environment of Russia has been caused by the recent announcement that Gazprom received a loan for 2 from the Bank of China for a billion euros for 5 years. After all, it was assumed that not a single Chinese bank would take such a risk. According to Gazprom itself, “this is the largest transaction in terms of funding attracted directly from one credit institution and the first bilateral loan agreement with a Chinese bank.”

2 in March, the Central Bank of the Russian Federation reported that the Russian Central Bank and the People’s Bank of China conducted several transactions with Russian and Chinese counterparties using the yuan-ruble currency swap mechanism, which, translated into Russian, means that the central banks of the two countries moved from theory to (swap agreement) It was signed in 2014 year) to the practice, which may urgently be needed in conditions of increased risks for the stability of the dollar system.

And so we all. The right strategic decisions are stuck in the difficulties of practical implementation, however, the joint efforts of both sides make it possible to gradually overcome them as the “Gref syndrome”, which is present in the Russian Federation and in the PRC; and the usual confusion for any complex undertaking, combined with the traditional mess in the heads and project documents.

11 in March, Putin announced his plans to visit China this summer, and there is a reasonable hope that this visit will give another and very necessary impetus to the development of Russian-Chinese cooperation.

The turn to the East, announced by Putin, is proceeding slowly, with difficulty and difficulty, but it is already clear that its success is inevitable as the sunrise of the sun tomorrow. With due diligence, we all will succeed. The main thing is to defeat the image of the West as “the only and indispensable” that has settled in the heads of some officials and managers.

Ctrl Enter
Noticed oshЫbku Highlight text and press. Ctrl + Enter
We are
Lacked either on 10 years, or forever. Patriotic artillery is experiencing is not the best period of his lifeHow can Russia survive and win in the 21st century?
Military Reviewin Yandex News
Military Reviewin Google News
77 comments
Information
Dear reader, to leave comments on the publication, you must sign in.