March 22 2016
54
At the trade fair for hunting and sporting events held in Nuremberg in early March weapons IWA & OutdoorClassics 2016 exposition of Russia was presented in an abridged form. To compensate for the absence of the largest Russian arms manufacturers at the exhibition under the sanctions (Kalashnikov concern, Izhmekhzavod, TOZ, KBP), the Molot-Oruzhie plant from the city of Vyatskiye Polyany was called upon. The enterprise from the Kirov region presented a logically complete and diverse family of its smooth-bore self-loading carbines "Vepr-12". Of which the shortened model of the VPO-205-3 carbine, which is popular today in law enforcement units and special forces, was able to attract special attention.

It is worth noting that smooth-bore guns, along with pistols and machine guns, are today the regular small arms of the law enforcement and security forces. In addition to the psychological action that they have on the offender, experts also highlight the powerful stopping power of 12 caliber cartridges. You should not disregard the high flexibility of using smooth-bore guns, which allow using a wide range of ammunition of various types: signal, gas, cartridges with rubber or plastic grape bag, noise cartridges, special cartridges for knocking out doors and locks, etc. 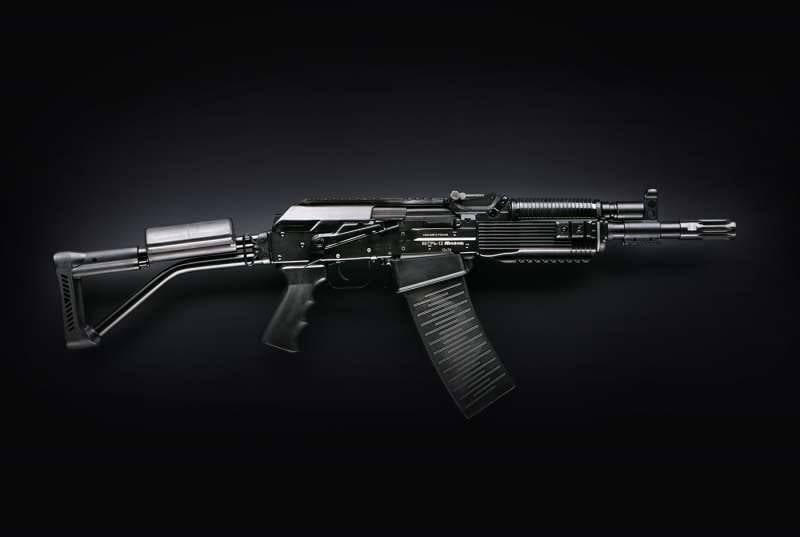 Until recently, the police almost without exception used smooth-bore guns with a tubular barrel-mounted magazine and a movable forearm, the so-called pump guns. This weapon was valued for its menacing appearance, simplicity and reliability of the design. The attitude towards self-loading smooth-bore carbines, especially among conservative American police, was rather skeptical for a long time, it was believed that semi-automatic weapons are supposedly always unreliable and expensive weapons, and their only use is “ladies” weapons because of automatic reloading and softer recoil when firing.

The Russian gunsmiths were able to dispel these biases in the 2003 year by launching the Vepr-12 smoothbore self-loading rifle to the market. At the Molot plant, the weapon was given the VPO-205 index. Together with its direct competitor - Izhevsk carbine "Saiga-12" - "Vepr-12" (the 12 figures in the name indicate the caliber of the weapon) buried the myth of the complexity, unreliability and high cost of smooth-bore semi-automatic. Gunsmiths from Vyatskiye Polyan managed to create a self-loading carbine, which, thanks to a capacious shop and ergonomics, had high firepower and could work reliably with various types of cartridges. At the same time, the price of weapons both then and now is at about 500 Euro. 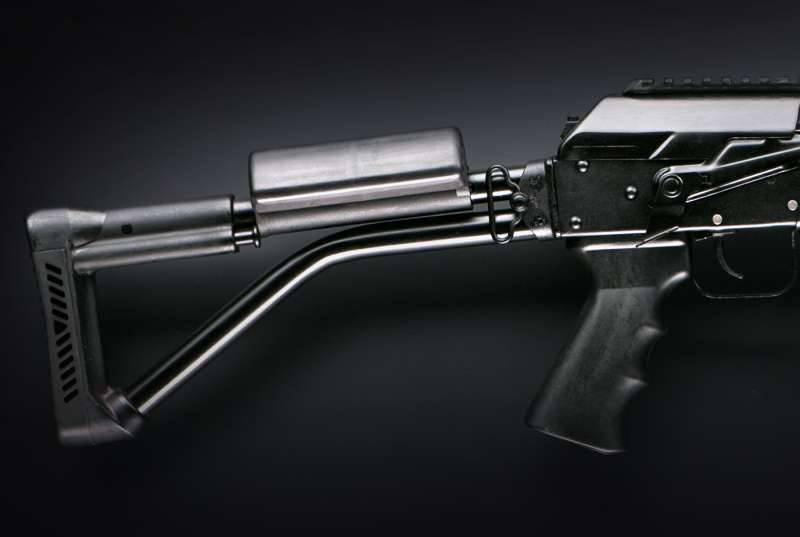 Carabiner "Vepr" came to the court not only in Russia. A smooth-bore self-loading carbine is demanded by the IPSC shooters and police officers, especially fighters from special assault groups who use the carbine as a “first strike weapon”. In our country, Vepr-12 has been certified as service and civilian weapons. In the 2012 year, after the relevant tests, NATO included the Russian carbine in the official list of weapons of the bloc countries. It was tested at the NATO Maintenance and Supply Agency NAMSA. The rifle was presented in September 2012, and the Bundeswehr officers used the self-loading rifle as a support weapon during the storming of the fortified premises. It is known that Russian weapons were purchased by Greece (special forces of the Ministry of Internal Affairs EKAM), France (Ministry of Internal Affairs RAID), Germany (special forces of the Federal Police), the USA, Syria and a number of other states. The high demand for carbines in the external and domestic market forced the Hammer-Weapon company to develop a whole series of modifications that formed the unified family of smooth-bore self-loading carbines VPO-205 / 206. All of them differ from each other in barrel length, types of butts and muzzle devices, as well as types of used ammunition - cartridges 12x76 and 12x70.

For self-defense of their home and security forces, the short carabiner model VPO-205-03 is the most interesting, the barrel length is 305 mm (for the 01 model - 570 mm, 02 - 680 mm). Like all Vepr-12 carbines, it was created on the basis of the famous Kalashnikov light machine gun - the PKK, inheriting from it a butterfly valve and the venting principle of operation. Naturally, the barrel, receiver, bolt and magazine have undergone modifications to allow the use of 12 caliber gun cartridges. In addition, the automatic fire sear was removed from the firing mechanism, a slide delay was introduced, and a descent block was provided with the carbine butt folded. 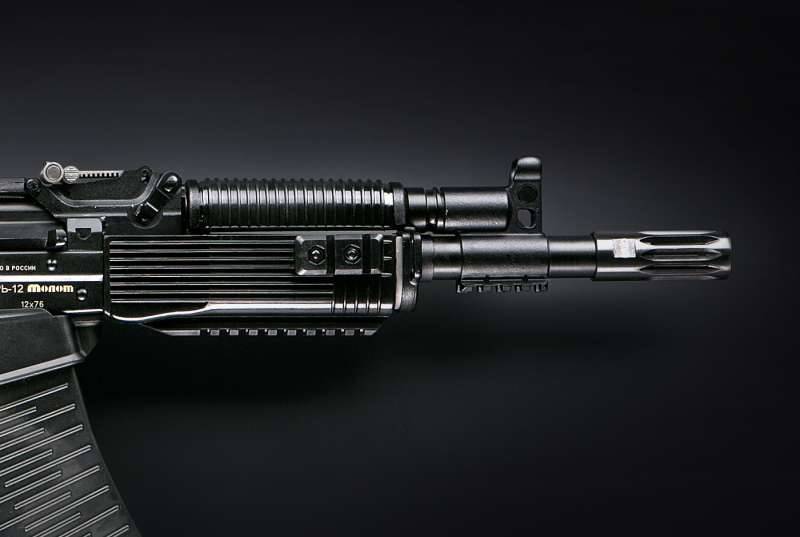 The barrel bore, the chamber, the gas chamber and the stem were chromed. One of the advantages of "Boar" is called the mine store with a wide neck, which provides a fairly easy and quick change of stores. At the same time, the HPE-205-03 is compact (overall length is 867 mm), but remains a very powerful weapon, having an effective firing range of up to one hundred meters with the muzzle energy of 12x76 cartridges at the level of 3800 J. installation of optical and or any other sights (weight of barreled devices installed on the lid of the box cannot exceed 1913 kg), as well as all kinds of accessories, adjustable tubular butt and a wide selection of interchangeable nozzles make smooth-bore carbine VPO-0,6-X NUMX universal and modern model of small arms, which is able to meet the needs of various shooters.

Automatic reloading of the smooth-bore carbine VPO-205-03 is carried out at the expense of the energy of the powder gases, which are discharged from the bore into the gas chamber, as well as the energy of the return springs. The barrel bore is locked to two lugs by turning the bolt around its axis with a longitudinally sliding bolt carrier. The model uses a trigger type trigger mechanism, which provides for the production of single shots. A blocking device was placed in the carbine's receiver, which does not allow firing from a weapon if its butt is folded. In addition, like the entire line of Vepr-12 self-loading smooth bore carbines, this sample has a slide delay allowing the moving system to remain in the rear position when cartridges are used up in a magazine. 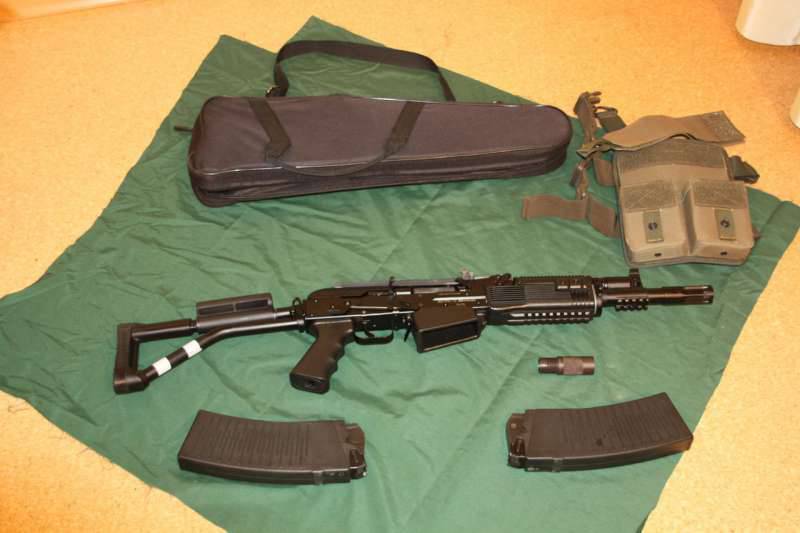 Sales of this smooth-bore carbine started in Russia in July 2011. Currently, the manufacturer on its official website indicates the price of the product in the amount of 40 890 rubles. At the same time, the Molot-Arms plant guarantees the operation of a carbine in conditions ranging from -30 to + 50 degrees Celsius, with the exception of areas with a humid tropical climate. The 205-03 carbine VPO is covered by the warranty in 18 months from the date of sale with an operating time not exceeding two thousand shots, and the life of the store should not exceed one thousand shots.

The project to develop a hunting smooth-bore self-loading carbine, having the factory designation "VPO-205-03", was based on the modification of the factory line "VPO-205-Е03", which was known for a long time, but was made exclusively for export. The peculiarity of this smooth-bore carbine is that it is an offensive weapon of the first shots, which possesses exceptional energy, dynamics and ergonomics, which are not available to other types of small arms in the short distance of combat.


Although according to the passport a hunting carbine, in relation to the market of civilian weapons, it can be defined by functionality as a high-power self-defense firearm. It is most effective in protecting against attacks at a distance from 3-s to 30 meters, at this range the role is played not so much by the accuracy of the shot as by its power. This carbine was originally positioned by the developers, as a weapon intended for defensive actions or sports shooting. It is also interesting to law enforcement agencies with special services. But for hunting VPO-205-03 it is inexpedient to use, this is also noticed by the Russian hunters themselves, yet the hunting potential of the short barrel severely limits - only 305 mm. 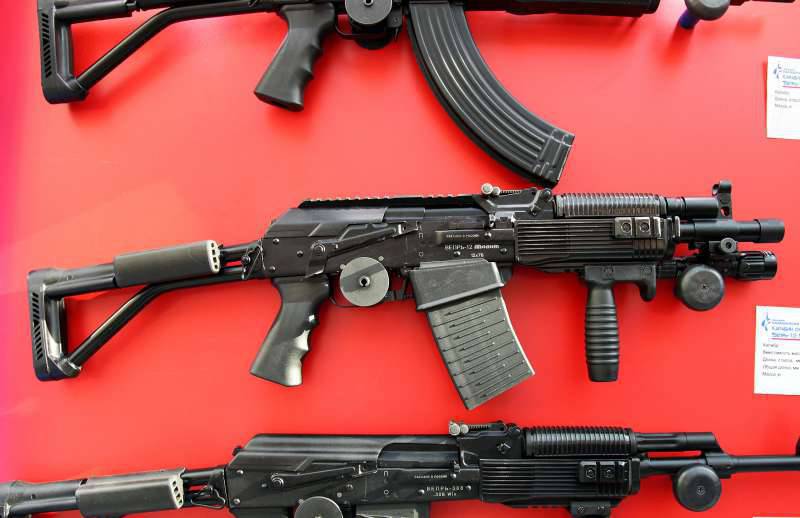 The main advantage of all modifications of the Vepr-12 smooth-bore self-loading carbines is their very high practical rate of fire, which together with the use of 12-caliber cartridges provides tremendous fire power of the weapon. The rate of fire is achieved by adding two factors: capacious single-row magazines with a capacity for 8 or 10 cartridges, which after emptying are quickly and easily replaced with new stores, and a self-loading carbine. In addition, the significant advantages of Vepr carbines include their “indestructibility”, that is, reliability. This weapon can be safely considered one of the strongest among all semi-automatic shotguns on the planet, affected by the strength of the PKK design, which was taken as a basis by Russian engineers.

Some of the drawbacks of weapons include the standard Picatinny rail, which is located on the underside of the forearm and makes holding the carbine by the forearm rather uncomfortable. But the main disadvantage is the mass of the smooth-bore carbine. Without a magazine, a telescopic sight, accessories, a cover with a belt, the short-barreled Vepr-12 VPO-205-03 weighs at least 4,2 kg. A loaded carbine with a developed tactical body kit and a sight will weigh even more. At the same time, this minus can turn into a plus. Since heavy weapons when firing behaves more stable, especially if the shooter prefers a rapid-fire regime.