Tricky comments. In Latvia, they decided to exchange Soviet awl for European soap

March 22 2016
114
Oh, these Latvians ... They cannot without attracting attention to themselves. But once attracted - get it. And get it.


Will get invincible and legendary Latvian arrows new weapon. Which, being, naturally, European, will help to resist the Russian legions, trampling near the borders of proud Latvia and waiting for the command to seize the country. 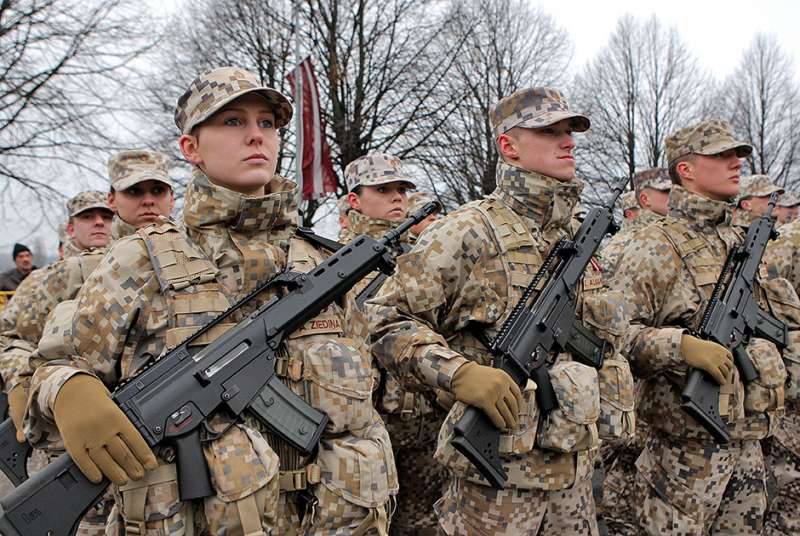 About exchange sewed on soap - this is not quite so. Of course, not soap. Plastic. But a great European plastic. The fact is that since 1993, Latvian military leaders have systematically disposed of the Kalashnikov assault rifle. In principle, it is logical that Latvia is NATO. It is necessary to comply. Well, at least a little ...

Back in 1998, the Minister of Defense of Latvia, Kristovskis, vowed to permanently get rid of weapons produced in the aggressor country. And he developed a very vigorous activity to find suitable models.

Kristovskis considered the Swedish AK-4 rifle a suitable model. In general, this is the German G3, but slightly doped by the Swedish gunsmiths. If you spit on antiquity (adopted in 1959 year and removed from it in 1979), then the weapon is, in principle, nothing. Will pull.

But the Swedes, being guys through pragmatic, despite the fact that by that time they decided to move to a more modern AK-5 rifle (sawn through FN FNC), they refused to donate their old rifles. For the money - please, but for free - it goes there ... over the ocean.

Overseas, Kristovskis’s pleas were heard. And they decided to help equip the Latvian army with modern weapons capable of giving a real rebuff to their aggressive neighbor.

According to the American military, the famous M-14 could easily cope with such a role. Naturally, not a modern sniper option, and the usual army. With a wooden bed.

And overseas friends sent a mountain of these monsters. Say, nothing is sorry for you, own, get ready to beat the enemy on its territory. And Latvia rose in one system with Estonia, Lithuania and Niger, as a country where these weapons are still in service.

True, in order to sweeten the pill, the United States passed some more state-of-the-art M16A1. But this is not for everyone, of course. This is for a platoon of honor. The rest and run with the M14. In the States, they ran. And even tried to fight.

By the way, in the USA the M14 rifle is a kind of record holder for the shortest service life in the country's army. Very quickly, they began to get rid of it. First they sold all over the world, then they started distributing. How to help.

And now, finally, the hegemony of M14 is over. And it will be replaced by a truly new and modern weapon! Proven in several conflicts and standing in service with many countries of the world. Not less known than the M14.

German G36. Yes, it in some quantities (comparable to the M16, that is, several dozen pieces) has already indicated its presence in the Latvian army. And this fact is very pleased all involved in this case. Indeed, why not rejoice? Latvians will finally receive not a museum piece weighing under 6 kg, but a real weapon. And the Germans, too, can be satisfied, because a small piece of the problem disappears, what to do with the G36, which are being decommissioned by the Bundeswehr. In the smelter can not send ...

Yes, once G36 was considered the best in the world in the West. It was adopted by the army of Malaysia, Indonesia, Latvia, Lithuania and Spain. She entered into service with police and army units of more than 30 countries of the world, including the United Kingdom, the United States, Poland and a bunch of others. But in Germany itself things are not so optimistic.

The German Minister of Defense didn’t just take it into his head to conduct an examination. It turns out that the German military, who fought in Afghanistan, complained of overheating with the continuous shooting of 150 and more cartridges. But what is 150 ammunition with G36 rate of fire over 700 rounds per minute and shop in 30 pieces? In a real fight?

Let the 700 number be technical data. In a real battle, shooting may not be as intense, it still turns out that after a few minutes the machine spits anywhere, but not at the aiming point. The military complained that it was practically difficult to hit targets that were farther than 100 meters, despite the fact that the shooting efficiency claimed by the manufacturer was up to 800 meters. But in fact, according to the soldiers of the Bundeswehr, it is lost after 200 meters, and because of overheating, there is a danger of distortions and jamming of the cartridge.

Well, even experts and without a study ordered by the German Defense Minister noted such disadvantages of G36: plastic fragility, heaviness without a magazine (3,63 kg weighs), the need for mandatory cleaning after three thousand shots (otherwise, the rifle is wedge), the difficulty of cleaning complex construction and lack of (!) ramrod.

By the way, AK-74, in which the metal is twice as large, weighs only 3,2 kg. It is desirable to clean, but ... you can do without, as practice shows, to wait for a calmer environment. About the ramrod just keep quiet.

So, in Germany scandal, and in Latvia everything is fine. And the decision was made: not only to leave the G36 assault rifles in service with the Latvian army, but also to give them to the State Border Guard and to the volunteers from the “Land Guard” (“Earth Watch”).

Just think ... But beautiful and, most importantly, ideologically correct. And the fact that the wedge ... And shops from low temperatures burst ... so in Latvia there is no frost, and no one will burn into the white light, like a penny. Well this is the Latvian arrows, and not anyone!

Moreover, "Heckler & Koch" reported that its assault rifle ... is not designed for continuous continuous fire.

If it may seem to someone that I was so disgraced for the Latvian army, believe me, no. They would and MP-40 completely gone. Plus also historically competent.

Pyzhatsya gentlemen limitrofy, puzhatsya, and the point? Unless, of course, this rearmament will allow them to hold out in case of something not two hours, but two hours and ten minutes - well, then it is normal. Justified, especially as a freebie.

So much for the European approach to defense. Who tanks will throw, who will not pick up the BMP after the exercises (out of fear not to be taken back), who will throw the rifles. The main thing is free!

Well live, gentlemen Europeans? The main thing that you like. And we that we and “Kalashnikov” is still quite.