March 21 2016
42
Information Service AMN with reference to its own sources, reports that Palmyra, which the Syrian government army and the militia continue to storm, is being pushed down by the forces of the Islamic Revolutionary Guard Corps - Iranian military formations. The submission states that there is no data on the possibility of taking part by the IRGC units directly in the storming of Palmyra. But it is argued that Iranian officers can act as military advisers to the Syrian troops.


Information Agency SANA reports that the Syrian government army today has achieved tangible success in the province of Homs. The Syrian military managed to crush several Igilov cars equipped with machine guns. On these off-road vehicles, ISIS militants attempted to strike at the flank of the Syrian detachments. One of the clashes occurred in the area of ​​the city of Karyatain. After a reflection of the igilovtsev’s strike, the Syrian soldiers stormed several villages in the same area. These are the settlements of Senyat Rashid, Jebal Ravasi, Tel-Kurdi and Jebal Jbeil. According to the latest data, at least 25 Syrian soldiers were killed in the battles for these settlements. 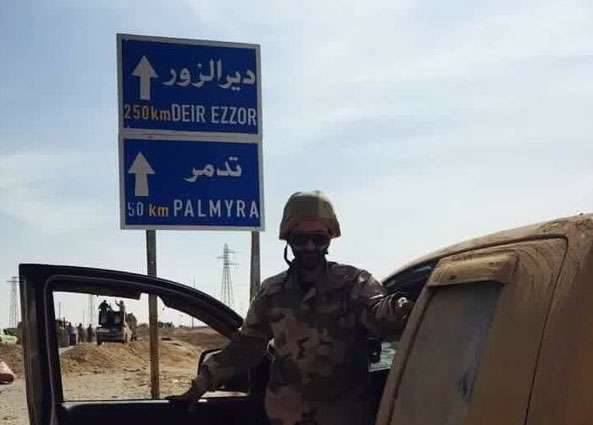 The attempt by ISIL to counterattack the units of the Syrian government army in the Deir ez-Zor area also failed. Igilovtsy tried to strike simultaneous strikes on the southern and northern quarters of the city, using heavy equipment. The forces of the 104-th Guards Airborne Brigade of the SAR Armed Forces, the militants suffered serious losses. On the banks of the Euphrates, the Syrian military counted about 30 killed terrorists. More about 70 militants were eliminated on the other direction of their attack. The number of dead Syrian soldiers is not reported.

Ctrl Enter
Noticed oshЫbku Highlight text and press. Ctrl + Enter
We are
The action “Military service under the contract is your choice!” In Rostov-on-Don: future contract servicemen, exhibitions and “Russian Knights”Reports from the militia of New Russia for 2 September 2014 of the year
Military Reviewin Yandex News
Military Reviewin Google News
42 comments
Information
Dear reader, to leave comments on the publication, you must sign in.